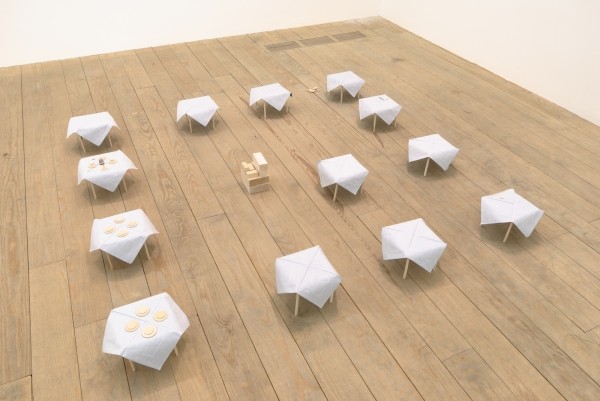 Objects & Thin Air is an exhibition of new sculptural works by Sam Anderson, Stephen Lichty, and Michael Wang concerned with the relationship between the visible and the invisible; between objects placed in a space and the ideas that circulate around them. The focus of this relationship lies somewhere between the poles of Conceptual sculpture, where the word holds primacy over the object, and Minimalist sculpture, where the object exists on its own terms without connotation. While there is an investment in the object by the artists in the exhibition, they undermine any sense of the object’s autonomy by implicating it within scenes or narratives.

SAM ANDERSON creates small-scale installations that often resemble models or prototypes. Through Anderson’s careful adjustments and placement of objects, her works lay out micro-scenes without providing tangible narratives. Balancing the humorous and the unsettling, these intriguing arrangements resemble film or theater sets whose scripts are ultimately elusive. Anderson has written:

Table 2 (2014) resembles a stripped down mise-en-scène using found components and disposable paraphernalia. Napkins, wood, wax, sand, teeth, peanuts, flowers, and pharmaceuticals are organized in the pattern of tavern tables. A reduced version of both a meeting place and antechamber, the arrangement concurrently references sites of commiserating and celebrating, and imagines future or past events. As a prototype for an idea that’s impossible to materialize, what’s communal is also secret, and hidden treasure is as available as over-the-counter cold medication.

STEPHEN LICHTY’S sculptures suspend familiar objects and materials within unexpected arrangements. His works have a pared-down form that is charged with poetic undertones. In a fine balance between representation and abstraction, and between presence and absence, they often possess a performative quality. For Objects & Thin Air, Lichty holds a cane upright in a recess in a gallery wall and suspends a ring in the air using string. Both objects are made from a polished golden bronze.

Lichty is interested in the process of meditation upon his objects and their arrangements, and what references, imagery, or intuitions this meditation can produce. His walking stick has an obvious function in the everyday world – of support and balance – but the material it is made from and its placement in the wall opens it up to symbolic or metaphorical allusions. Although it is not a found object – it was forged by the artist using a hammer and anvil – it nevertheless has the quality of the Surrealist “readymade”, something taken from life and transposed by its place in the gallery.

The gravity defiance of Lichty’s ring is quickly seen through: it is visibly held in place by colored string from the floor and ceiling. Yet it seems to hover in a liminal space, somewhere between the rational and the irrational, or between the physical and the metaphysical. Its iconic shape conjures a variety of references; it suggests the sun, moon, and earth; a magician’s ring; or a Minimalist sculpture. It has presence yet is ethereal; like a sign with multiple meanings, it is at once image, object, and illusion.

MICHAEL WANG uses global systems as subject matter and media; the international economy, the mass media, species distribution, and climate change become sites for aesthetic intervention. Found or fabricated objects are arranged within the gallery space in relation to their role within these wider systems. For Objects & Thin Air, Wang stages an intervention into corporate branding and ownership: two mass-market deodorants are arranged on a shelf in relation to the companies’ total shares of stock.
PGUN (2014) is part of a series of installations that deals with rivalry between large corporations that make and market consumer products. The artist looks at how rivalry is constructed and how it benefits the corporations involved. He intervenes in this rivalry through a process that he calls “neutralization.” Wang has written:

Rivalry between firms in competition for market share results in the growth of successful firms and the shrinkage and irrelevance of lesser firms. The drive for expansion tends to produce a handful of very large firms in direct competition — often narrowing the field to two key competitors. The mutual growth of rival firms corresponds to an increase in overall market size. This is the competitive logic of capitalism. While the internal culture of a corporation often views competing firms with enmity, rival firms in fact rely on each other to grow and change. Competition creates codependence.

From an outside perspective, these competing firms can be seen as a single entity or phenomenon: a de facto merger. As such an entity, the rival firms would constitute a monopoly.

Michael Wang (Olney, MD, 1981) lives and works in New York City. He holds a Master of Architecture from Princeton, an MA from NYU, and a BA from Harvard. Recent exhibitions include: Kraupa-Tuskany Zeidler, Berlin; The Hite Collection, Seoul; Foxy Production, New York (solo) (all 2013); Primetime, Brooklyn, NY (solo); and the Carpenter Center for the Visual Arts, Harvard University, Cambridge, MA (two-person) (both 2012.)
www.foxyproduction.com