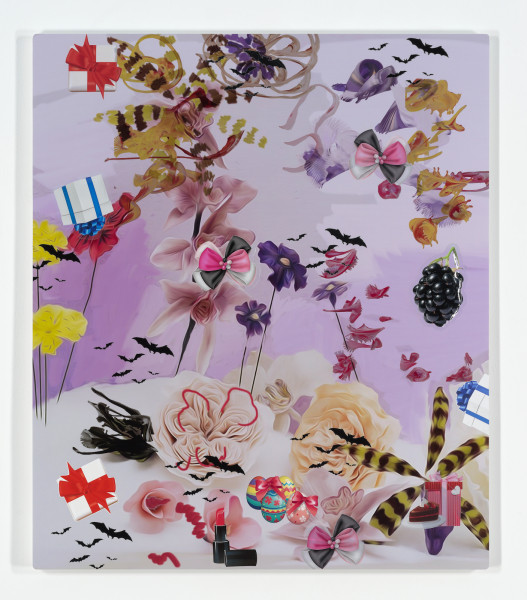 Foxy Production presents ily, Petra Cortright’s inaugural New York solo exhibition. ily (an abbreviation for “I love you”) comprises a series of paintings on reflective Plexiglas that combine both abstract marks and repeated figures. The works are produced using a unique printing technique that involves the application of many layers of intense pigment and textured surfaces, with some areas retaining a mirrored effect.

Cortright’s core practice is the creation and distribution of digital files, whether they be videos, GIFs, or jpegs, using consumer or corporate software and platforms. She became renowned for making self-portrait videos that use the webcam and default effects tools on her computer, which she then uploaded to YouTube. For ily, Cortright paints in Photoshop and employs digital greeting card software to produce digital files that are transformed into her paintings, with each image layer of the file determining the separate applications to the Plexiglas.

Cortright’s digital files are endlessly modifiable, but when they are translated to two-dimensional objects, at a “decisive moment,” they are locked down, finite. Yet the works’ range of repeated motifs and marks, and their disorienting perspectives and dimensions suggest movement and change.

Their figurative elements, luscious blackberries, bats, presents, ribbons, flowers, are visual signs whose meanings seem almost depleted, yet, within their visual DNA, they retain a trace of emotion. While being ubiquitous, impersonal, repetitive, and overly cheery, they still hold a degree of symbolic force, not unlike the way the exhibition’s title refers to love, and not unlike the way the works’ brushstrokes refer to the painter and her palette, oils, and brushes.