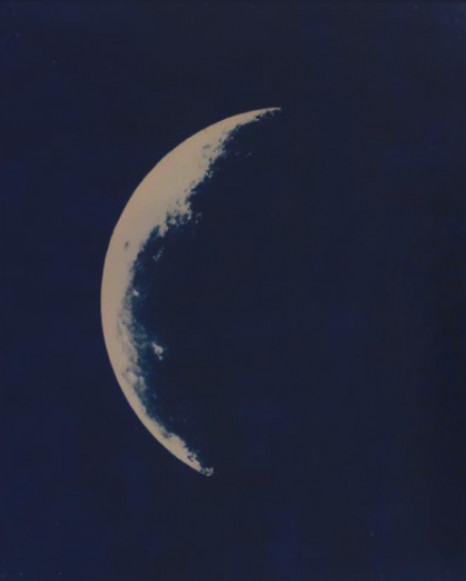 Suggestions of material for galactic exploration: stars, suns, moons, spectres, waves, evocations of the Milky Way and of clouds in the celestial sphere. These objects orbit in the interstellar exhibition CONSTELLATIONS.
The body of work chosen for this exhibition is an opportunity to present recent acquisitions such as The Constellations (2011) by the Moroccan artist Bouchra Khalili and Lunagram (I-VI) (1851-2010) by the American artist Lisa Oppenheim, works with a scenographic connection to others in the Frac Nord-Pas de Calais collection for more than a decade, such as Per purificare le parole (1978), a star in terra cotta and steel by the Italian artist Gilberto Zorio. Work in all media are brought together to create a unique discourse, such as Panamarenko’s bookobject Toymodel of Space (1993) and model for the spacecraft Verti-vortex (1981) and the French artist Véronique Joumard’s photographs Lunes, Soleils (1993), depicting the day’s opposite moments and eliminating the possible ways of moving from one to the other. While scientists study relations of scale, from the particle to matter, the German artist Bernd Lohaus’ Micht (1979) and Nichts (1979), for example, bring us back to our own existence in a predefined space-time.
The exhibition CONSTELLATIONS is conceived as a source of interpenetrations between art and science. The relation to matter, ways of looking at the world and the construction of knowledge are the points of contact and topics of dialogue between these fields, interrogating the beginning and the end of their histories whose paths cross. As in the night sky, the traces produced by the alignments of stars form constellations which sometimes seem familiar. The works selected invoke a feeling of the infinite sublime. Like the cosmology behind numerous theorems and so many articles by generations of scientists, works of art have brought about convergent and divergent ideas. The exhibition’s itinerary is not fixed – not in the history of the works and not in the space they occupy in the exhibition. The perceptive experience sets in motion complex machinery, wavering between acceptance and incomprehension.
Here, a reception practice is privileged. While constellations have been the objects of measurement and attention for centuries, they are still not really well known. Observers of the skies, who until now have used only the shapes formed by stars to identify them, can now go beyond mere appearances and confront these ‘elementary particles’ thanks to the multiple visions offered up by the works in the Frac Nord-Pas de Calais collection.
www.fracnpdc.fr