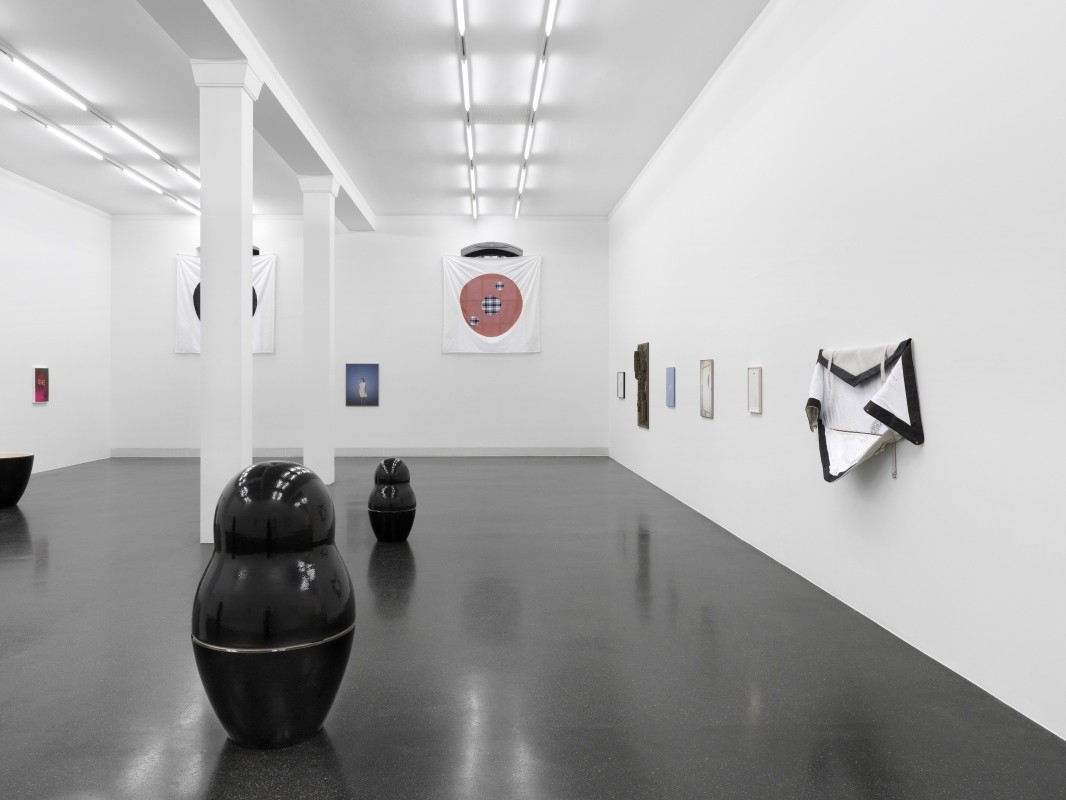 For her fifth show at Galerie Francesca Pia, Mai-Thu Perret is exhibiting bronze bells shaped like organs of the human body– the heart, uterus and lungs– a large scale installation comprising three ceramic nesting dolls, as well as new series of drawings and fabric banners.

The sound of bells is associated with the power of exorcism and purification: it wards off evil influences or warns at their approach. The idea of casting bells in the shape of human organs, while surrealistic and playful, has a long history. For example, Roman wind chimes, usually made of bronze, were called tintinnabula and were hung in gardens, courtyards, and porticoes where wind movement caused them to tinkle. They were believed to ward off malevolent spirits and were often combined with a bronze phallus, another symbol of good fortune and a charm against evil.

The Russian Dolls elaborate on a number of formalist issues intrinsically linked to questions of ceramic and sculpture: the relationship between monumentality and the human body, generic forms such as pots and urns (and therefore the antinomy between sculpture and containers, or arts and crafts), issues which inevitably lead into the question of gender. The nesting shapes of the Russian Dolls are generic folk artifacts that traditionally evoke maternity and reproduction. Executed here at a scale large enough to contain a human body, they also bring up images of sarcophagi or funerary vessels.

The drawings and banners extend the artist's foray into abstraction, where motifs borrowed from Indian Tantric painting or the Spiritualist Hilma af Klint merge with the desiring machines of Dada's mechanomorphs.

Fillette is also the title of a parallel group exhibition, co-organized by Mai-Thu Perret and Fabrice Stroun. Works by ten artists and an anonymous Tantra painting from Rajasthan were selected as the singular terms of an open-ended rebus that includes Perret’s new sculptures and banners.

Mai-Thu Perret & Fabrice Stroun have worked as a curatorial team when they codirected the program of Forde, L'Usine in Geneva (1999-2000). Subsequent projects include Les Jardins de la Violence for Expo 02, in collaboration with Daniel Baumann and Johannes Gachnang. Fillette is their third group exhibition for Galerie Francesca Pia.
www.francescapia.com