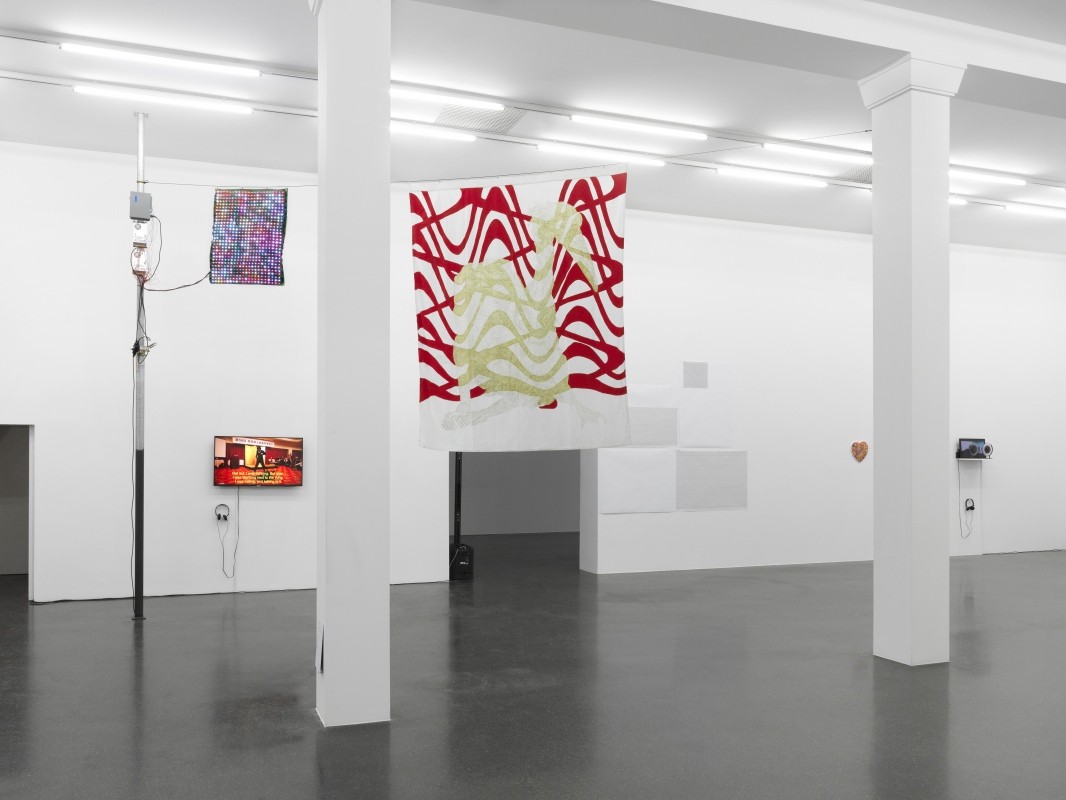 “HARSH ASTRAL” is the conceptual continuation of the exhibition “The Radiants” presented by Bortolami Gallery in New York in 2015. While the theme there was radioactivity in the broadest sense set against the background of the fourth anniversary of the earthquake and resulting crisis in the Japanese nuclear power plant Fukushima Daiichi, which prompted the foundation of both the Green Tea Gallery and the UNITED BROTHERS, “HARSH ASTRAL. The Radiants 2” brings together works that revolve not only around radioactivity, but loosely and associatively follow the motif of radiation, transformation and energy in general, thus spreading out in different directions. Interestingly, radioactivity is permeated by a fundamental moment of ambivalence, which has less to do with the phenomenon itself than with its potential use, since every science and technology possesses a both utopian and dystopic aspect. The fact that there is no escape—despite the end of the downright atomic euphoria in the 1950s, at least in Western countries, and the commencing critical questioning of it—is demonstrated not least by the threat of renewed nuclear armament three decades after the end of the Cold War. So beyond the permanent threat it poses in civilian use as energy, radioactivity is now attaining political explosiveness again.

The exhibition features works that quite concretely start with the catastrophe of Fukushima, as well as works that are connected to the theme in a more associative manner. For example, the video by Norimizu Ameya/Iwaki Sogo High School documenting the performance of a play produced in collaboration with students of Sogo High School in Iwaki Fukushima that is based on the personal memories of the earthquake and tsunami and the resulting nuclear disaster. Chaos*Lounge have been independently organizing an art and street theater festival in Fukushima since 2015, during which they distribute letters to the members of the audience at different places in the city as part of the play. In order to relate this experience to the visitors of the exhibition in Zurich, as well, interested persons can ask to have the letters sent to them. The LED images of Ei Arakawa approach the incident in a similarly poetic manner by “singing” about the nuclear disaster of 3/11 in a song, while referring to the picture “Massen” by Jutta Koether who is also featured in the show with a work. Nobuyoshi Araki’s photographs engage with the nuclear accident in a more subjective manner as well. They are based on one of Araki’s photo diaries created over three months in parallel to and after the disaster, to which he reacted by scratching the negatives. In the more documentary work by the young artist Bontaro Dokyama from Fukushima, anti-nuclear activists who have illegally built an “Anti-Nuclear Museum” consisting of tents in front of a government building in Kasumigaseki are lent a voice. The video piece is embedded in an installation made of a poster wall showing protest banners and a model of the government building fictively covered with these posters. All these works make reference to the actual disaster in Fukushima in 2011. Twenty years beforehand, Susumu Katsumata had already drawn comics of Japanese atomic power plants as well as the threat they pose. The volume “Fukushima Devil Fish“ with his works is on display in the exhibition, accompanied by a lecture by Ryan Holmberg on Katsumata and the genre of Japanese “Atomic Comic”.

Other works of the show allude in a more general way to the theme of (radioactive) disaster. Lucie Stahl’s work, for example, is based on her childhood memories of the atomic accident of Chernobyl in 1986. Terry Riley’s piece is the soundtrack of Bruce Conner’s film Galerie Francesca Pia “Crossroad” from 1976 that shows images of the explosion of an atomic bomb on the Bikini atoll in 1946 in extreme slow motion. Also strongly influenced by music are the works of Alivia Zivich, who with Nate Young ran the Detroit noise music label “AA Records”, whose band “The Demons” in turn wrote the soundtrack for Zivich’s videos “Life Destroyer” and “Head Threeways”, which are projected onto her painted cloths. Henning Bohl’s drawings loosely refer to the literary genre of “Cosmic Horror“ with the lettering “Fatal” and thus evoke dystopic and apocalyptic scenes; a motif against which one can also read the gray-black works of Anita Leisz, the works of Kitty Kraus or the sci-fi-like android theater of Oriza Hirata/Seinendan.

The motif of radioactivity, radiation and energy as a purely physical phenomenon is the starting point of a series of further works of the show. Ariane Müller’s video “Marie Curie oder jahrelang im Wohnzimmer und nur lesen”, for instance, shows a woman reading the diary of the physicist and rubbing her fingers, from which sparks emanate. Erika Kobayashi’s photographic work and her dollar sign object made of uranium that glows in ultraviolet light are also based on a narration having to do with Marie Curie, who used pitchblende (a mineral uraninite) from Joachimsthal in the Czech Republic for her research on radium, for which she received the Nobel Prize as the first woman. Yuki Okumura’s work uses email communication on a fluorescent picture, which due to this quality was assessed as potentially highly sensitive by the museum staff, to demonstrate the purely projective and paranoid equation of glowing = radioactivity = dangerous. Jay Chung’s & Q Takeki Maeda’s “March Painting”, in contrast, is painted with a pigment, Nano Prussian Blue, that can indeed be associated with radioactivity, but was originally used to dye Prussian military uniforms blue. Since it binds radioactive cesium, scientists are currently investigating whether it can be used to decontaminate radioactive areas. Referencing the picture by Chung & Maeda, Henning Bohl and students of his class at the University of Applied Arts Vienna in a workshop with Ei Arakawa titled Mutant Autopilot Brushes developed the song “Nano Prussian Blue” and painted so-called “mutant” pictures with precisely this pigment that are presented along with the song in a “karaoke stage installation”. The work by Pratchaya Phintong also deals with a recent scientific discovery, in this case with methane hydrate that is deposited in huge amounts on and under the sea floor and considered a potential source of energy for the future, even though its extraction is extremely risky and could have far-reaching effects on the climate. A purely fictive source of energy, or energy production, is at the center of the work “L△▽△ L△▽E” by Kerstin Brätsch/UNITED BROTHER/Sergei Tcherepnin/Stefan Tcherepnin, a sort of science fiction in which mysterious agents merge with the earth’s lava energy. This utopian vision and fiction of energy and light places the work close to that of August Wenzel Hablik, an artist of the early 20th century, for whom visionary utopias played a pivotal role in the form of utopian crystals and light architectures.
www.francescapia.com