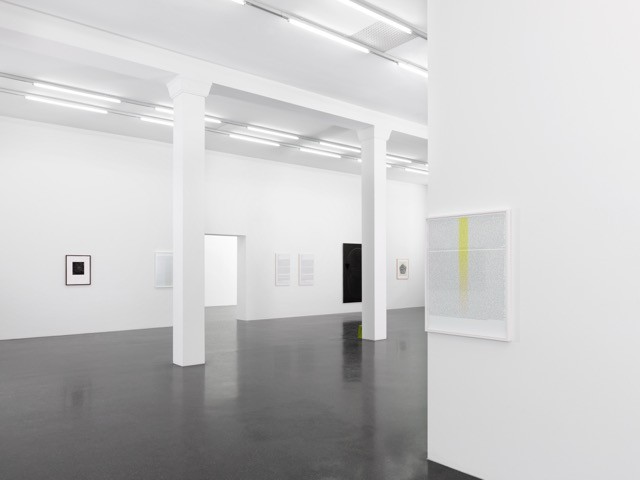 There is hardly a finished or self-contained image to be found in this exhibition but, rather, incomplete black monochromes, textual fragments and pornographic sketches. Those works do not affirm security, but do express doubt, they obscure more than they reveal. 1 With the effects of using backlight (bruant &spangaro), mirroring (Monica Majoli), a photogram (Fabian Marti), aftervision (Anne-Laure Sacriste) or deformation (Isabelle Cornaro, Jutta Koether, Benjamin Swaïm) the black monochromes call on vague epiphanies that the viewer can not immediately grasp.

The texts – mutilated (David Jourdan), analytical (Jay Chung & Q Takeki Maeda), fictional (Mai-Thu Perret), fake-functional (Lisa Holzer), coded (Hanne Darboven) or seemingly anecdotal (Josef Strau) — become even more poetic because they don’t limit themselves to a simple reading. Literally as well as figuratively, the words obscure and, in the same movement, create images. The works on paper follow this order of the unfinished and appear in prepared sketches and in pornographic images composed from memory (Monica Majoli), as effects of transmission (Anne Laure Sacriste), as fetishized matter (Virginia Overton) or as visualizations of lust itself (Juan José Gurrola, Benjamin Swaïm).

Pictures to really be seen, and texts to really be read, are found yet not accessible: worn out books, having wandered through some stranger’s hands, which Jérémie Bonnefous took out of circulation in secondhand bookshops, to present in the same bags in which they were handed to him. As much as the other works on the wall, they keep to themselves, stubbornly evading reading and inspection whilst explaining evenly: “At present it’s done, I have done it.” 2