A Birthday Present as a Watch 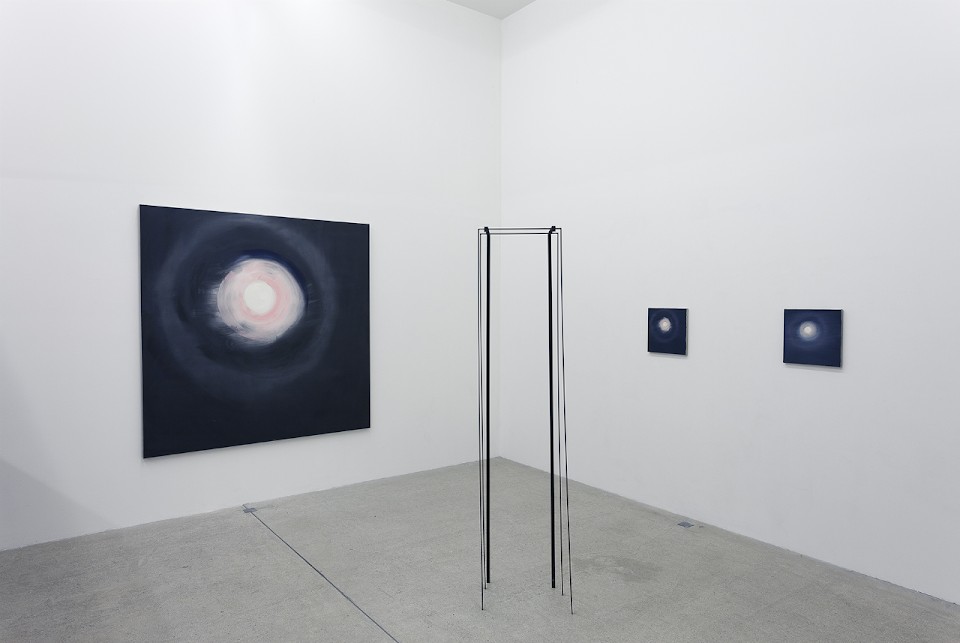 I have spent the past five years interviewing my grandmother, now 86 years old, along with her friends and colleagues, to document her life within the arts. During the process, I discovered, among the stories that are repeated and rehearsed over time, stories that are not part of the grand narrative of one’s life. They are off-script, anecdotal and elliptical. Aging provides a longer, and more complex space for time to jump through one’s own lifespan; even as it moves parallel to the political, cultural and societal realities of the time. The works in this show abstract, distort, suspend, estrange and punctuate time. Phenomenological observations of nature, media, public and domestic space are investigated through a wide range of media, often implementing techniques of editing as a way to question the mechanics of memory.

Ann Craven has been painting the moon for over two decades. Two small moons, painted en plein air and seven minutes apart (their dates and times recorded in the titles) correspond to another pair of Craven’s paintings - copies of one of the original moons - enlarged and represented in mirror images of each other later that year. Through her rigorous and singular painting practice, Craven repeats, reuses, layers, and creates a meticulous archive of these subjects. Her work reads as a diary, marking time as it moves forward and collects moments past.

Thea Djordjadze presents an installation of hinged steel plates that take over an entire wall of the gallery, and two free standing sculptures: one that is empty and another that is an enclosed volume. The works reference functional design and the body in architectural space, yet are reduced to rudimentary, intuitive forms that have a capricious relationship to the supporting surface.

A psychological domestic interior is also imagined via Ketuta Alexi-Meskhishvili’s site-specific curtains, which establish a veil between the exhibition space and the outside world. The transparent, billowing fabric (through which visitors have to cross to enter the gallery) is printed with images made using a variety of digital and analog photographic methods - including photograms and images of the artist’s own flesh as seen from a computer screen, embedding herself into the abstraction.

Talia Chetrit mines from past series of her work to present an edit that generates a new, if fragmented, narrative. Each of the four photographs depict the body in parts or whole (limbs are emphasized) and the subjects are unidentified, except for one image of the artist herself, who is seen stepping over the camera.

Hannah Weinberger conceived of a multi-channel video installation for the viewing room of the gallery. Three videos from 2015, 2016 and 2017 are projected simultaneously on a loop in a complex, symphonic composition of discordant sound and image. The footage, collected by Weinberger from daily life and travel, transforms the familiarity of Western city streets, restaurants, museums and aquariums, into estranged, dream-like sites where contemporary life of consumption becomes incoherent.

Howardena Pindell’s Video Drawings series, began in the 1970s, also questions and complicates sources she finds from everyday life, specifically network television. Made by affixing a sheet of acetate marked with diagrammatic, curvilinear arrows and numbers, the layered image is then photographed using a 35mm camera. While the drawings are illegible, by suspending an instant on screen and emphasizing the form and movement of the bodies (in this case all black players), she calls attention to the coded roles mass media instills on our consciousness.

Ketuta Alexi-Meskhishvili (b. 1979 Tbilisi, Georgia; lives and works in Berlin, Germany) had her first solo institutional show in 2015 at the Kölnischer Kunstverein in Cologne. She has also had solo exhibitions at Micky Schubert, Berlin; Andrea Rosen, New York; and Kaufmann Repetto, Milan. Her work was included in the 2013 New Museum Triennial and exhibitions at the FRAC Haute-Normandie, Rouen; the Kunstverein Hannover, Hannover; Bielefelder Kunstverein, Bielefeld and Bridget Donahue gallery, New York. Her work has been featured and reviewed in publications including Artforum, The New Yorker, The New York Times and Frieze magazine.

Talia Chetrit (b. 1982 Washington D.C., USA; lives and works in New York, NY, USA) has had work exhibited in institutions such as the Whitney Museum of American Art, New York, NY; Palais de Tokyo, Paris; Sculpture Center, New York, NY; LACMA, Los Angeles, CA; and the Museum of Contemporary Art, Miami, FL among others. Her work has been featured and reviewed in publications including Artforum, Art in America, Frieze Magazine, The New York Times, and The New Yorker. She was recently shortlisted for the AIMIA | AGO Photography Prize, Canada’s most important prize for contemporary photography.

Thea Djordjadze (b. 1971 Tbilisi, Georgia; lives and works in Berlin, Germany) studied at the Kunstakademie Düsseldorf with Rosemarie Trockel and has been the subject of solo exhibitions at the South London Gallery, London; MoMA PS1, Long Island City, NY; MIT List Visual Arts Center, Cambridge, MA; Kunsthalle Basel; Malmö Konsthall and the Secession in Vienna. Her work was included in the Georgian Pavilion at the 2013 Venice Biennale and she presented a solo installation at Documenta 13 in Kassel.

Julia Trotta is a curator, writer and advisor based in New York. She is currently in production on a documentary on the life and work of her grandmother, art historian Linda Nochlin.
www.galeriefrankelbaz.com