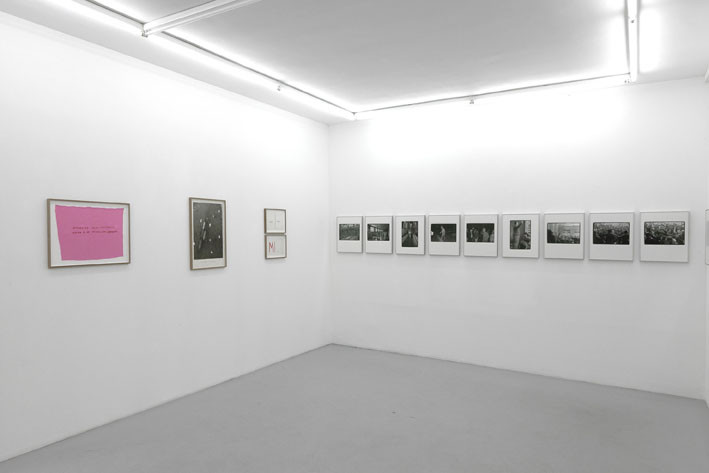 In his works Mladen Stilinović focuses on the language of politics and its reflection in art and everydayness. He researched the field of artistic sign and speech by decoding verbal and visual clichés in order to separate language from the common or daily political ideas and connotations. It is not just the matter of word, but the colour of red, the symbols of the socialist community: the flag and the star. The slogan Attack on my art is the attack on socialism and progress (Napad na moju umjetnost, napad je na socijalizam i napredak) (1977), written on artificial pink silk, is, in that respect, typical for various reasons. Using paradox and manipulation, Stilinović appropriates the brutality of political speech upon himself thus levelling the roles of the speakers. “If language is owned by ideology, I, too, want to become the owner of that language, I want to think in that language with corresponding consequences”, writes the artist ([Footwriting], Tekstu nogom, 1984). Absurdity of expression, repetitive aggression of the word in socialist reality is accumulated in the works whose topic is speech turning into babbling. In one of his artist’s books, Solitudes II (Samoće II) (1976), the artist uses a photograph of the crowd from which he cuts out individuals and makes collages on the pages of his book writing the text “taken from the crowd”, and then “returned to the crowd”, to finally finish with one of the most popular slogans of the former Yugoslavia used by Tito to keep the country together: “brotherhood and unity”.
Some works deal with the basic contemporary myths such as bread, pain, time, money.
Photographic oeuvre of Boris Cvjetanović is overwhelming and goes back to the beginning of the 1980s. The artist photographed idyllic Scenes without meaning (Prizori bez značenja) and Summer vacations (Ljetovanja), social photographs in hospitals and prisons, homeless people living in the manholes of the heating plant..., and over three decades his photographs followed activities of contemporary visual artists in Croatia.
The author’s series of photographs Labin Miners (Labinski rudari) was created in 1987 during the strike of the Istrian coal mines when Cvjetanović visited Labin, Raša and other places in the vicinity as the reporter of the then very influential student newspaper Studentski list. It was a huge strike of a very sensitive population, the miners who came mostly from other republics of the former Yugoslavia at the time when strikes were prohibited. Namely, it was believed that the communist society ruled by the workers themselves could solve all problems in countless other ways. The strike lasted for over a month and could not be kept secret. The first series of the artist’s photographs was published in Studentski list and exhibited in the Extended Media Gallery (Galerija PM) in Zagreb, following which any further publication of the series was immediately prohibited. In his photographic report, Cvjetanović managed to intertwine, in the most subtle of manners, the collective – public and intimate –and the private. He photographed miners’ meetings, the group which was fighting for its rights and existence and was being manipulated at the same time. He took shots of the miners’ common washing area, locker rooms and their private life – their houses, families and their own portraits.
Cvjetanović is warm, friendly, mingles with the people, they respond to him with trust and calm look in their eyes. On the other hand, Stilinović is distanced, he analyses political discourse in its multifarious linguistic and symbolic manifestations, using the state methods which he then attacks with irony; he is cynical and funny. Both Cvjetanović and Stilinović based their work on the dialogue with the society of the Yugoslavia of the period, speaking openly about the collective and the individual fighting back.
Both artists, each in his own distinctive way, depict a man “taken from the crowed” and “returned to the crowed”.
Branka Stipancic