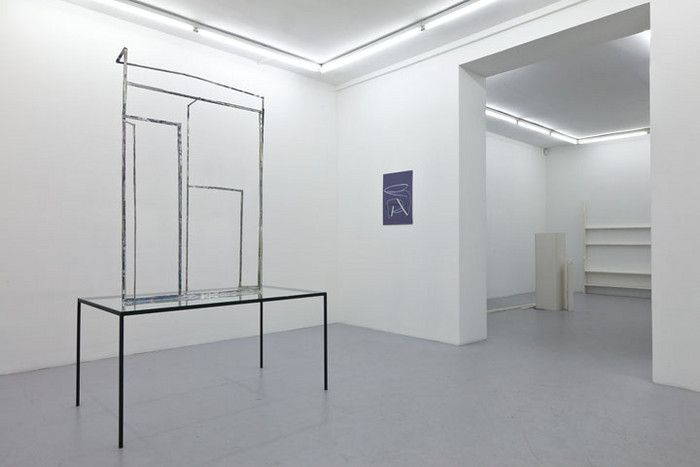 Sara Barker, Jesus Alberto Benitez and Mélanie Blaison pay particular attention to the presence of material.
The exhibition takes place on the edge of sculpture, when it subsides and becomes almost a model or a drawing of itself. The object then becomes pictorial. It embodies its own construction, even if it’s frail.

Like the remnants of a former painting, Sara Barker’s sculptures seem to barely stand. An object in the making surfaces through the assembly of the lines, whose painted material forms the very structure.

Jesus Alberto Benitez’s photographs and drawings put together an escape plan from the plane. A drawing board and a desk are the spaces from which drawn lines escape. Elsewhere, both spontaneous and precise, the line slides off the surface of the paper and becomes concrete again.

It is only after a while that Mélanie Blaison’s sculptures reveal the clues of a common origin. Casts of found objects, fragments from the impossible reconstruction of a place, caught by its own replica, into a landscape of plaster.

The title of the exhibition is borrowed from Jean Louis Schefer in discussing Martin Barré’s work.