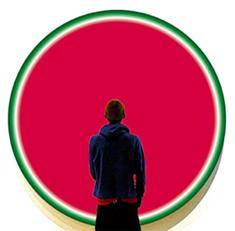 OLIVIER BABIN
"Nobody and soul"

From January 14th to February 25th, 2006
Opening on Saturday January 14th, from 5pm to 9pm
The gallery will be closed from January 26th to January 31st

Body and Soul is a jazz standard, a blues classic.
Nobody and Soul is the title Olivier Babin chose for his new exhibition, like a promise of wandering between presence and absence, between matter and its simulacra, between the signifying and nothingness, between delight and melancholy.
With its cheap spirituality, The Pathfinder greets the spectator, like an invitation to travel through the exhibition weightlessly, in search of something yet unclear. The latter will find semaphores on his way that will either enlighten or confuse him...
Like this gigantic circular canvas that could shine like a sun but that figures a sad smiley, whose title, I’m Too Sad Not To Tell You, echoes Dutch artist Bas Jan Ader's video I'm Too Sad To Tell You (where the artist himself appeared inexplicably in tears, facing the lens of his camera), but increases its expressivity ;
like this banana skin in painted bronze, negligently lying about on the ground (Slip Inside This House), a sculpture that embodies a modernist purity as well as a shrivelled appearance ;
like this graph made of fluorescent red perspex (You And Me Together Fighting For Our Love), on which light streams, a kind of monument to the glory of extreme liberalism, but adapted to an office format, originating from a found document (the american artist Robert Rauschenberg’s ranking) ;
like Lonely Cobalt Key, this travelling salesman open suitcase, containing samples of cobalt blue neon lightning tubes, a cash'n'carry exoticism.

Olivier Babin builds an ambivalent landscape, clear-minded and psychedelic, whose undeniable charm adorns itself with manifest idiocy... A wonderful swindle, a white blues, the epic story of a solitary soul locked in its room eating cheese.