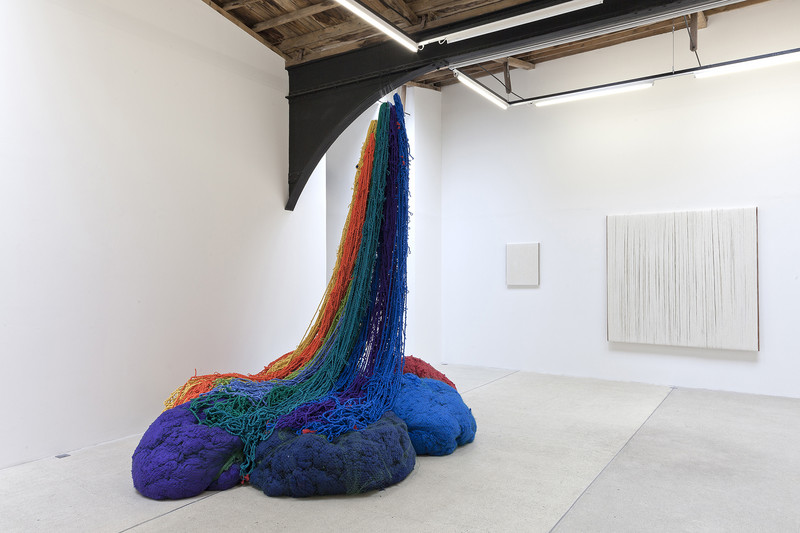 To understand that what is interesting about Sheila Hicks’ work lies not so much in the savoirfaire artisanal of textile as in the emancipating elaboration of a new language, you need only visit her exhibition at the galerie frank elbaz. While preparing this project, Hicks expressed the wish that the critical apparatus surrounding her work should be renewed, so that it might be seen from a different angle. The title she has chosen for the occasion is Unknown Data. The exhibition, which she thinks of as a ‘confidential explosion’, has underlying currents and invisible data running through it, like, for example, the coloured yarns which constitute the core of her lianas (Atterrissage, 2014, Cordes Sauvages, 2014, La Sentinella, 2013, Fleuve Fantôme, 2014) or the personal affairs hidden inside her balls of fibre (Trésor des Nomades, 2014). Sheila Hicks’s approach is almost semiological, in the sense that it is a deconstruction of the structure of traditional artistic mediums – as the very Roland Barthes motif S/Z would seem to suggest; the motif is inspired by pre-Columbian “brujaria” weaving and is a feature of the compositions Vermala Blanche (2014) and Quatre temps (2014). Her entire oeuvre is a perpetual recycling. Each new project unravels the previous exhibition to adapt its formal vo cabulary to the next space. This constant deconstruction is the tool which enables the artist to elaborate a new language that arises out of an emancipated colour space at the interval between painting and sculpture. Gallien Déjean (extract)
www.galeriefrankelbaz.com