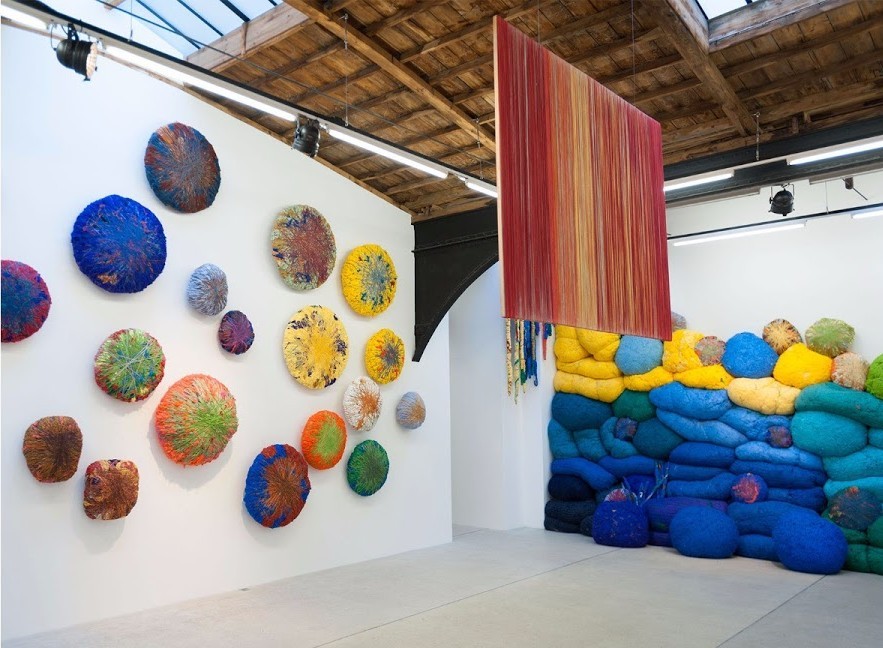 At the heart of Sheila Hicks’ work lies a fundamental invitation: to collectively engage in the practices of observation, self-questioning, evaluation and exchange. This invitation is also a demand, urging us to learn from all encounters, not to refuse, but rather to welcome, indeed to provoke them, and thus to benefit from new ideas and new knowledge, from other traditions and other people’s investigations, which should always be acknowledged. This stance has guided her work since that pivotal time between 1954-1959, when she was a student at the Yale School of Art and Architecture. There she was influenced by the Bauhaus teachings of Josef Albers, which she began to combine with ideas from a course on pre-Columbian civilisations taught by art historian George Kubler, author of The Shape of Time: Remarks on the History of Things (1962), a work that became an important reference for virtually all practicing artists during the 1960s and the 1970s.

Through Kubler, the archaeologist Junius Bird, and the historian Raoul d’Harcourt, whose mission to Peru for the Musée de l’Homme lead to the publication of Textiles of Ancient Peru and Their Techniques (1934), Sheila Hicks discovered the skill and the craft of the Andean peoples, a civilization without a written language, yet with an unparalleled technical refinement. For the young student, who had dedicated herself to painting, the mastery of the Peruvian weavers and the complexity of their structures were a revelation. Since then, the series Minimes, a long sequence of miniature formats, begun in 1958, continues to bear witness to this radical encounter, which has been at the root of Sheila Hicks’ entire work for more than 50 years. It constitutes a synthesis of modern Western art practices and ancestral pre-Columbian traditions, a combination that has enabled her to create a universal vocabulary- light, colour, texture- accessible to everyone, transcending genres and categories.

The work of Sheila Hicks is striking and one is irresistibly drawn towards it, but it also contains a revolutionary anthropological dimension, having introduced textile materials, of animal and vegetable origin, and synthetic fibres into today’s contemporary art world, as if it were perfectly natural- the word is deliberately chosen- to paint and sculpt with linen, cotton, slate and raffia.

Si j’étais de laine, vous m’accepteriez? (If I were made of wool, would you accept me?) Sheila Hicks asks with a faux innocence. This question contains an element of humanity, an appropriate quality for a practice eager to extend the traditional scope of art, to abolish the entrenched borders between the different artistic domains, but also, as I would like to believe, to inject movement into the world as it goes round. Beginning with Rempart, situated at the entrance, the exhibition forms a circle, a cyclical proposition, punctuated alternately by breathing spaces and moments of intensity. This rhythm can be found in the chromatic tones and luminous colours of the diptych Lépidoptere I and II and the monumental wall installation Another Break in The Wall. Rhythm is also produced through the juxtaposition of works of radically contrasting scale, like when the huge mural tapestry Struggle To Surface (created between 2014 and 2015 in Guatemala) is next to the miniature world of Minimes. In some works, it is found in the dynamic between the warp and the weft, in others, in the interplay between the recognition of the same and the surprise of the new. In Conversation, Tirer-Compresser and Silencio, wool and linen, arranged in dozens of lines, engage in a lively debate as to their respective superiority and as to who should occupy the place of subject and verb- Sheila Hicks’ approach produces a linguistics of colour, in which each work embodies an expressive moment, always unique, that opens “lines of movement in space”. In the final analysis, this is the rhythm of nature itself, of the seasons, of growth and the changing light throughout the day. In its everyday dialogue with colour, the natural world- including its flora, but also the microscopic life of insects, the eternal horizon of the glaciers and the stormy skies of the Tierra del Fuego- constitutes an irrepressible source of inspiration, as demonstrated by the works Atacama XX and Villarrica, named after a Chilean desert and volcano respectively. The work of Sheila Hicks seems like an ongoing education in the relationship between colour, form and action, for herself, the artist creating it, as much as for the audience observing it. Using rudimentary work tools and the “materials at hand”, her art continually assembles, reassembles and dismantles the letters of a natural and mysterious alphabet, colourful and textured, accessible and insatiable, euphoric and available to those who know how to grasp it.