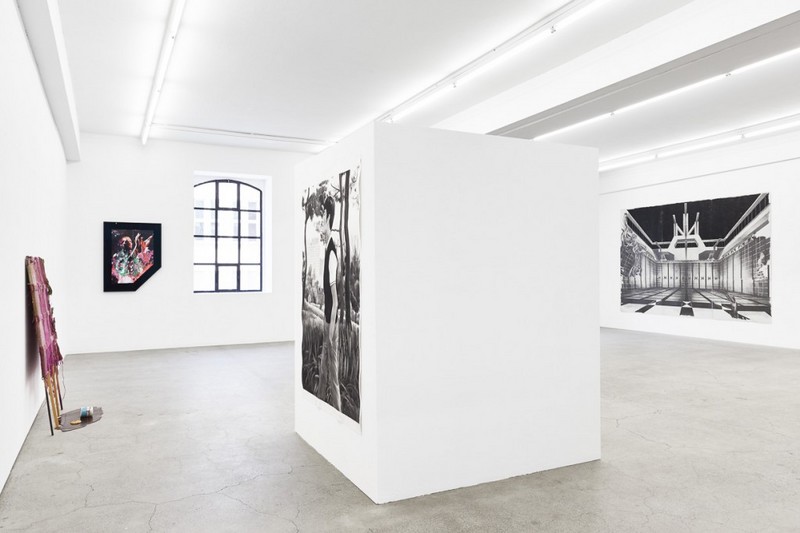 „Borrowed Alibis“ is referring to the (supposed) hyper personal, or the what seems to be charged so object relating to the private space, personal histories and intimate affection. The exhibition is looking at bringing together artists and works that „use“ objects, materials or settings that suggest intimacy as a form of narration that is ambiguous, irritating also in what seems at first their lack of distance and refusal of the omnipresent alienation both between art work and author but also art work and audience.

They seem to avoid safety of a purely conceptual argumentation, minimalist aesthetical forms and a safe discourse that is solely based on quotation of current intellectual style. They are works that seem somewhat obsessive in both personal narration as well as materials they use

In their supposed lack of distance and loss of control, they develop a language that is fearful or angry, melancholic or full of desire and compassion but never neutral. Some topics are abandonment and loss, conflicts in structures of politics, gender and identity, but also love, hope, beauty and wishful thinking.

Most of all though, they are positions that do not disclose how far their suggested narration is truly personal or to which extent intimacy is used as an artistic strategy just as others use minimalism or abstraction. They remain ambiguous in whom they exactly address and display objects, materials and contents that flirt with personal charging and yet remain symbols and representations.

The large pencil and chalk coal drawing of Marc Bauer (*1975, Geneva, CH, lives in Berlin, DE) depicts an imaginary totalitarian architecture on the verge of collapse. Like many of his works of landscapes such as mountains, island or architectural settings, „Triumph“ reads as a representation of an idealized rather than realistic mental space. Often relating to cinema as a reflection and juxtaposition of cultural debates, „Triumph“ evokes Leni Riefenstahl‘s famous „Triumph of the Will“ (1935) that chronicles the Nazi Party Congress in Nuremberg- a city that also stands for the attempts to juristically and morally clarify the fatal consequences of the same regime a decade later. Bauer‘s „Triumph“ therefore can be interpreted as a symbol of human struggle for control and the failure or perversion of the very same.

In his practice Steve Bishop (*1983, Torronto, CAN, lives in London, UK) often uses minimalistic interventions and playful arrangements to create precise settings for installations that investigate subjectivity and alienation of the individual in a climate of interchangeable, anonymous architectural, technological and cultural settings

The video „Standard Ballad“ by Steve Bishop shows an extract of the 1980 Olympic games closing ceremony in Moscow. Projected across from a bed that the visitor is invited to use to watch the video, the carpeted room is equipped also with a simple bed side table and lamp, evoking something like a suburban teenage melancholia. This setting seems to promise Depuis 1788 Freymond-Guth Fine Arts Limmatstrasse 270 CH 8005 Zürich T +41 (0)44 240 0481 office@freymondguth.com www.freymondguth.com Tue – Fri 11 – 18h Saturday 11 – 17h Or by appointment protection, youth and hope and at the same time recalls cultural icons of very different kinds: Felix Gonzalez- Torres „untitled“ (1991) poster depicting an unmade bed, or also Tracey Emin‘s „My bed“ (1998) and Norah Jones‘ „Sunrise“ (2003) Starbucks anthem that in Bishop‘s work is playing steadily from the radio alarm clock next to the bed, slowed down to synchronize with the video.

The anachronistic, irreverent aesthetic of Josh Fought (*1979 St. Louis MO, USA, lives in San Francisco CA, USA) acts as a critical Trojan horse for highly sophisticated, politicised works that embody serious, thoughtful concerns. Hand-dyed and handwoven, they reflect identity politics in which color, each appropriated, mainly found object and even the weaving technique opens a precise reference into its social history and cultural signification. The color mauve e.g. in the western society in the late 1890s is a signifier for (forbidden) homosexuality and has remained central to the LGBT community and AIDS activism. The explicit political dimension is also made reference to by wooden sticks the works are attached to, they seem like personal proclamations of a private demonstration. „Emotional Friend“ extends those associations by objects relating to emotional and psychological props such as comfort eating, self-help or howto manuals- relief that seems equally homespun as the wisdom manifested on other badges or greetings cards. This second layer of cultural references creates a personal link to larger topics of life such as Love, Time and Death through irony- but never sarcasm- that is wonderfully human and introduces also a different sense of time: the value and slow process of skillful craft is juxtaposed with mass produced every day culture and poetical one liners.

Tom Holmes (*1975 Ozona TS, USA, lives in Liberty TN, USA) relates to ambiguous standards of pop culture and pop art on one hand and his long-lasting research into the anthropological tradition of funerary and memorial cults on the other, that Holmes appropriates into minimalist and yet playful gestures. His works „untitled (shroud)“ are not only colorful versions of the confederate flag as a shroud that often links to a controversial view of the traditional southern states under rule of religion and white people, they also seem to make a flirtatious curtsy. NBA superstar Dennis Rodman- who is known for his ostensively worn extravagant hair colors and fashion accessories- is the center of attention in the „untitled Arrangement“ compositions of flowers and lustful scratches - much like a teenage admirer might secretly keep them in his locker- though old- fashionably framed in canvas- covered mounts much like long passed ancestors.

Klara Lidén (*1979 in Stockholm, SE lives in Berlin, DE) appropriates her immediate environment of urban landscapes into installations, videos and performances. Often using found materials normally considered waste of a consumerist society, she reduces them to their minimalist qualities that at the same time as she charges them with personal affection full of desire, rebellion and disobedience. Her own body hereby serves as a tool and a weapon that reverts the traditional functions of institutional, private and public spaces. Her video „Kasta Macka“ shows the artist at the banks of a river at dawn, throwing stones and other items into the water. As the day rises, her movements become more dynamic, what seems child-like game at first becomes an existential act of liberation.

Megan Francis Sullivan (*1975 Stamford CT, USA, lives in Berlin, DE) is generally interested in the idea of transfer that happens in the shifting of signification of precise cultural contexts and the imagery, text and objects they produce. Many of her paintings, but also sculptures and video works relate to how identity, gender and power structures are reflected in contemporary art and are taking a specific artist as their starting point, while others follow a more subjective approach. In all of her works a unique combination of analysis and something that could be described as passing fancy can be found. Her „Cha- Cha in Montmartre“ series shows a young man in a park walking, sitting, smoking or reading- a flaneur wasting time. Seen from many different angles and distances, his unsuspicious activities are captured by an undisclosed viewer who becomes a secret voyeur. Despite the romantic or even slightly obsessive character that is inhered in these scenes, they at the same time remain distant and almost cold due to the absence of any color or personal affection.