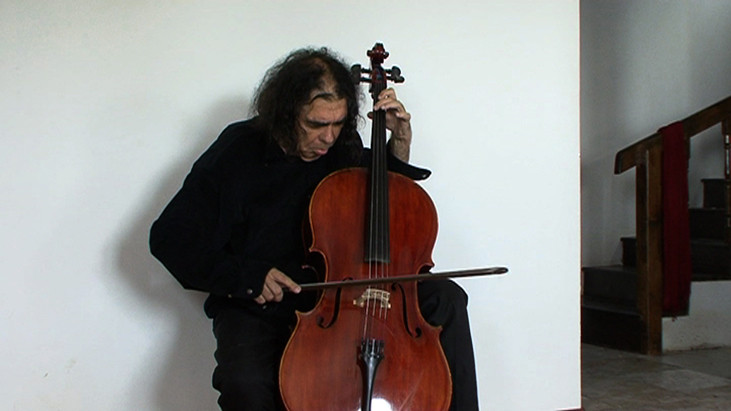 We are very proud to announce the first lap of our Grand Relay series of exhibitions, screenings and performances with two films by Dani Gal (*1975, Jerusalem, lives in Berlin, DE).

Grand Relay shows artists of the gallery and guests in site specific, large scale installations that all include a particular interest in sound, music and performance. The exhibitions are accompanied by screenings and performances both at the gallery and beyond, partly commissioned as collaborations of the participating artists.

Iancu Dumitrescu (Romania in 1944) is one of the leading avantgarde composers working today. His music is defined as spectral - a musical composition practice where compositional decisions are often informed by the analysis of sound spectra. During the last 30 years he has composed a large body of works for music for tape and computer. Dumitrescu’s music is based on the idea of ‘acousmatics,’ meaning the intimate exploration of sonic phenomena. He composes by eliminating everything around the instrument and carefully examining the actual sound. One of the key aspects of his work is the exploration of possible connections between the most archaic Romanian music, Byzantine music and today’s avantgarde music.

The video by Dani Gal is an adaptation of a story Dumitrescu told in an interview about a dream he had during his military service in Romania. The dream, which had a very strong effect on the composer’s work, is an expression of sound in the most violent and primary fashion in a context of military situation saturated with absurdity.

Dani Gal‘s „Dumitrescu‘s Dream“ is shown as a two channel video installation. The second video presented - „Urformen“ (Archetypes)- is a documentation of the artist’s visit to Romania in 2010 where he met the avantegarde composer. Aside from conversations with

Dumitrescu, the film also documents various performances. As most works by Dani Gal also „Dumitrescus Dream“ and „Urformen“ emphasize on the ambiguous role of a medium and follow both its significance as an intimate, subjective experience on one hand, and its abstract representation of social circumstances on the other. However, the exhibited works focus less on one specific political or historical event but the production of sounds as such. As his 2009 film „Black Magic Marker“- that portrayed the jamaican experimental musician and god-father of dub Lee Scratch Perry- „Dumitrescus Dream“ and „Urformen“ put the inventor of this specific interpretation of the medium sound at it‘s center.