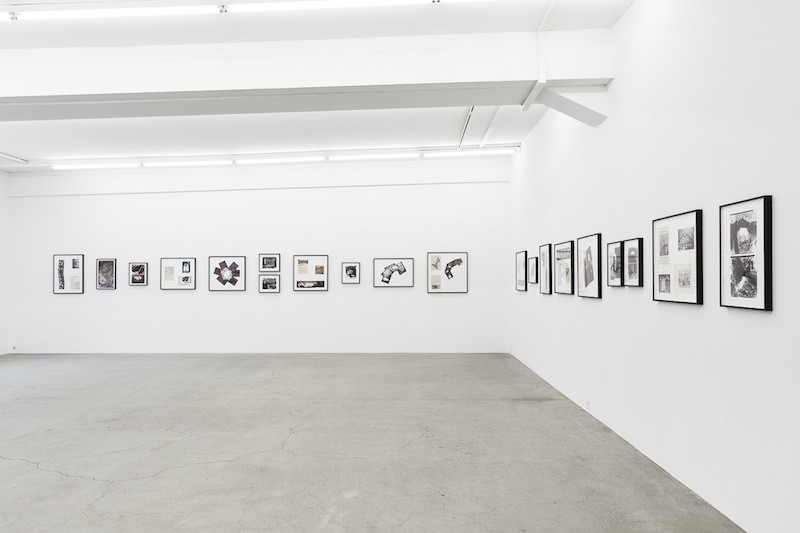 A marble block leaning against the wall carries an engraved writing that also functions as the title of Dani Gal‘s latest exhibition at Freymond-Guth Fine Arts- „Sono vietate le discussioni politiche“, (Italian: „Political discussions are prohibited“). The phrase refers to signs with the same message as they could be found in Italian bars in the past.

Such transfer of content from a specific socio-cultural, political or historical context into an abstract form that reveals its structure but doesn‘t offer a clear political or moral interpretation is typical for Gal‘s oeuvre. In his films, audio installations or collages involving text and imagery, the artist emphasizes on so-called blank spots in the documentation and narration of historical events and the visuals and documents they generate. Gal establishes a link between the individual, collective and official experience, the memory and representation in media of existential moments often in relation to Israeli society and identity, as well as specific collections of the above mentioned materials.

The film „A woman of valor“ (2015) is a visit with 90- year old Holocaust surviver and civil rights activist Hedy Epstein to her birthplace Kippenheim in BadenWürtemberg, Germany. The biblical term Eshet Hayil (woman of valor)- that traditionally describes the role of the good, obedient (and therefore „valuable“) wife in the ancient Jewish patriarchal system - hereby serves as title and illustrates the various conflicts Epstein evokes- controversies that position her anywhere else but as a good wife and yet require enormous individual courage.

Epstein is a long-time supporter and participating activist of various organizations for the support of Palestinian concerns - most notably the Jewish Voice For Peace in her today hometown St Louis (MI, USA), the Free Gaza Movement and the international Gaza Freedom March that failed in their attempts to brake the blockade of Gaza by Israel and the Egyptian government. In 2014 Epstein was arrested once again under the attention of international media when she participated in a demonstration following the shooting and killing of 18- year old unarmed Michael Brown in Ferguson, MI by the local police.

In Gal‘s film, Hedy Epstein speaks about her experience before, during and after the war as a Jewish girl in Germany and how she became involved in the civil rights movement of the late 1960ies- for affordable housing, the right to abort or against Vietnam and later for Peace in Palestine and Israel. On the background of the story of her life, Epstein reflects on reconciliation between victim and perpetrators, forgiveness and political awareness. By questioning today‘s notion of Israeli society as identity of eternal victims that allows the disregard any human rights towards the Palestinian population, Epstein addresses a little popular view in contemporary Jewish identity.

One special moment in the film shows Epstein‘s concern with creating awareness of Depuis 1788 Freymond-Guth Fine Arts Limmatstrasse 270 CH 8005 Zürich T +41 (0)44 240 0481 office@freymondguth.com www.freymondguth.com Tue – Fri 11 – 18h Saturday 11 – 17h Or by appointment the Naqba- (Arabic: „al-Nakbah“, lit. „disaster“) the catastrophe for Palestinans that followed the Israeli Independence war 1948, where more than 700‘000 Palestinians were expelled from their homes and many thousands were killed and wounded. The Naqba serves as a central element in the fundament for today‘s situation between Israel and Palestine- and yet is almost entirely taboo within the historical narration of Israel and its international perception. Epstein states: „If people know the word Shoa, they should also know the word Naqba“.

The Naqba also constitutes the emphasis in Dani Gals series of photographies and documents „Reality Estates: Fake Properties, Lifta“ (2015). Lifta, a former Palestinian village on the outskirts of Jerusalem, represents the tragedy of the Palestinians, their homes and culture: once a booming, wealthy village with more than 2500 inhabitants, those had to flee in the 1948 Independence war. The abandoned village was at first settled with Jewish refugees from Yemen and Kurdistan who on their part had been expelled from their Arab home countries as a result of the founding of Israel. Lifta however later was partially deconstructed by blowing holes into the ceilings of the buildings in order to prevent the return of Palestinians, but in contrast to most Palestininan villages was never entirely destroyed. Several plans to rebuild it as a neighborhood or turning it into a luxury resort have failed.

In close reference to Gordon Matta-Clarks practice and reversal of his title „Reality Properties: Fake Estates“ (1973), Dani Gal uses photographs, historical documents but also news clippings to ensemble a diverse illustration of a history where politics, economical interests and concerns of cultural identity are represented in architecture and structural characteristics.

Using various techniques of printing and reference of sources „Reality Estates: Fake Properties, Lifta“ does not create a linear narration of historical events or tries to provide a specific political or moral point of view- it much rather functions as a lose assemblage of material that on one hand illustrates the diversity of the conflict itself. However on a abstract level, the work uses the purely formal character of the found architecture- holes in ceilings while the supporting walls seem stabile- as another reference to Matta-Clark‘s work, with the distinction that these holes are the result of strategical and political destruction, rather than sculptural decisions made by the artist.