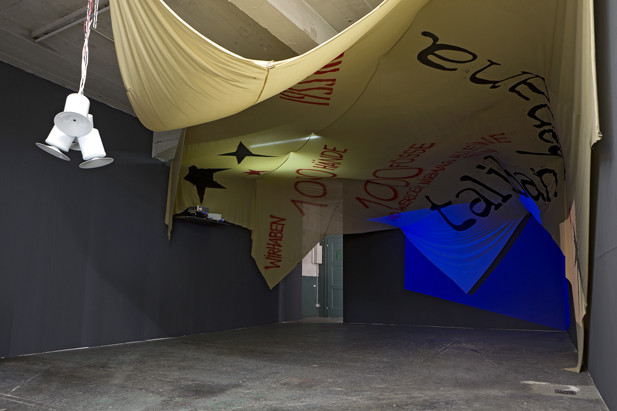 We are very pleased to announce the installation ‚Mano Gigante‘ by Discoteca Flaming Star (Cristina Gómez Barrio, *1973, ES, and Wolfgang Mayer, *1967, DE, live in Berlin, DE) on the occasion of lap 3# of our Grand Relay Series* of exhibitions, screenings and performances.
Discoteca Flaming Star is an interdisciplinary collaborative art group, a group of people which uses songs and other forms of oral expression, understanding them as a personal response to historical events and social and political facts.
Through conceptual, visual and musical transfers, they create performances, sculptures, drawings, stages and situations whose foremost intention is to question and challenge the memory of the public, transforming old desires and finding invented pasts, or pasts which never occurred. DFS is the place where the oracle speaks through the non-chosen. DFS is a love letter written in the present continuous, a love letter to thousands of artists.
They expoit their knowledge and lack of knowledge, working slowly, inspired by Anita Berber, Warhol‘s wig, ghosts with no home, Rita McBride‘s „Arena“, Greg Bordowitz, Mary Shelley, Karl Valentin & Lisl Karlstadt, the Vienna Group, Alvaro, Joey Arias and David Reed‘s paintings and dialogues.
DFS present wonderful songs of love, consumption, fervour and feminism, carpets that help to cross burning bridges, fragile essays as drawings, and things that go together even though they shouldn‘t...
They act directly in the gap between action and documentation, generating and finding documents that can be used to articulate strange tongues and languages that incite action and argument.

Mano Gigante
The Lazaro Cardenas Memorial, designed by the Architects Francisco, Angel and Azorin Telmo in 1973, located in Parque de España, in Mexico DF, surrounded by trees. A jungle within a jungle.
The monument was commissioned by Spanish republicans who had sought refuge in Mexico in 1939. Through this monument they wanted to express their gratitude to the Mexican state for having offered them political asylum and to commemorate the encounter between two fighting collectives: the Mexican revolutionaries and the Spanish republicans.
www.freymondguth.com