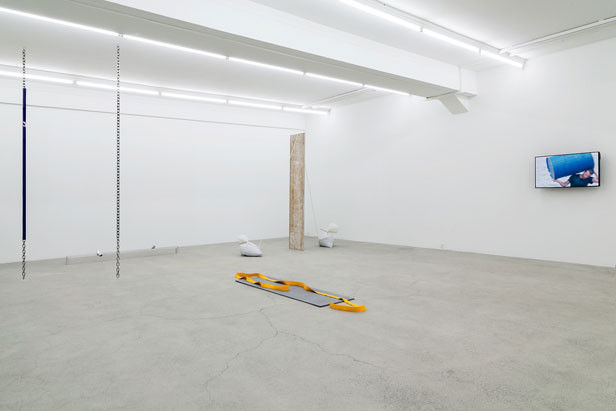 This exhibition presents three artists, whose works all disclose their constructive elements and find the acuteness within reduction. We are very pleased and honored to be able to show sculptures and video works by Virginia Overton (* 1971 Nashville TN, USA) together with Nicola Martini (*1984 Florence, IT) and Magali Reus (*1981 Den Haag, NL).
Building materials, that are familiar from daily use, underlie all works – ropes, ratchet straps, planks, aluminium et. al. appear all over again. The range of building materials reaches from used, randomly found boards and sandbags to sophisticated stones. The works are also united by their seeming simplicity. It not only occurs because the individual elements usually can be recognised immediately but also as in most cases the works stick to stringent forms.
Virginia Overton‘s work may in the first instance come across as the most minimal one compared to the other two artists. Her sculptures can be characterized by her use of precisely those everyday building materials, that are merely kept in balance through their own weight and a particular tension, e.g. from the straps used.
Mostly, the work is easily threatened by tilting, collapsing, breaking and tearing and the fair balance is menaced to be dissolved. But at the same time the tensionen that is needed to hold the sculpture together develops so to say from the inner powers and in silence.
This silence can also be found in the hardly visible and latent vinyl piece. The colouring – white on white wall – mirrors the reduction distinctively. Also with this piece the simple forms create a certain dynamic and speed through their arrangement that in turn holds the work together.
In Magali Reus‘ work the question of contruction is less adjunctive with precarious moments, but rather underlying with a unique candidness. The individual elements are being left as they are, the composition doesn‘t lead into a defined direction, no intrusiveness of meaning is restricting the viewer, instead they rather open up questions and atmospheres.
Particularly in Reus‘ work one can comprehend the most famous quote, that the work is created through the viewer. Reus provides the materials. Amongst other things the very clear and abstract forms that she contrasts with casted everday objects. Watches appear as well as squeezed cans, and by being casted in metal they seem guided over to artifiality and abstraction where they meet again with the surrounding abstract form.In a very material sense, Nicola Martini similarily guids particular conditions over to other states. His stringent sculptures are initially crafted from stone, quoting the classic tradition of sculpting. Other materials as wax or cement are being added and most importantly, the stone is worked on with acid. Depending on the kind of stone the surface and structure is being affected and modified. The colouring of the work as well as the treated inner consistence in this way emerge from the invisible.
Different layers develop, but not from being layered on top of each other, rather on the contrary, they are often kept invisible and even force the dissolving of the inner structure.
One is tempted to think about alchemism, however the dream of the ‚gold‘ is lost inside the different layers with their respective distances and also closeness.
As different the directions are that the three artists tend to open up, they are in the most striking way able to guard the initially rather rough and unspectacular materials into a transformation process and to test different forms of coherence, conversion and endurance.
www.freymondguth.com