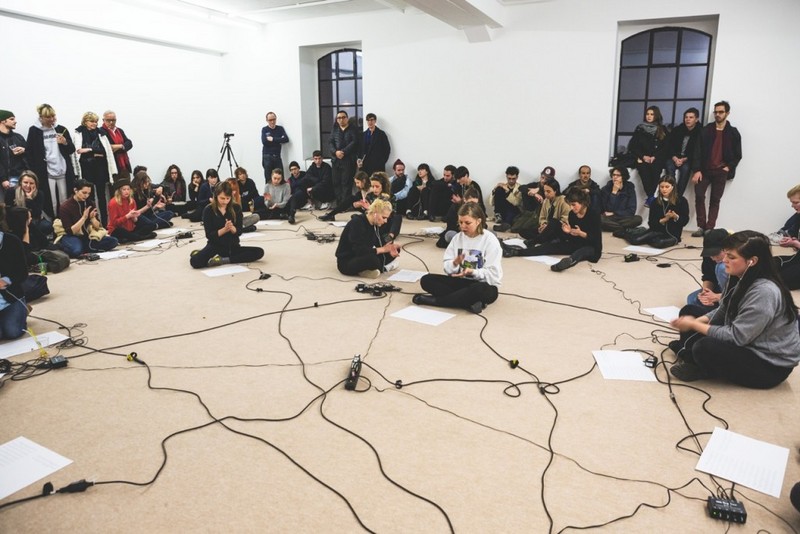 For Kanon für 20-30 Frauen a group of women chosen by the artists will perform a clapping canon. The performative moment which requires precision and endurance by the participants uses the repetitive format of the canon to outline the ambivalent tension between heterogeneity and homogeneity of certain social groups - in this case formed by only women - in a rigid, but at the same time playful way. Formed of individuals, while performing the canon the participants are „forced“ to be part of a strong ensemble. At the same time the ensemble of performers is „dissolved“ within another group formed by the audience. The performance is on one hand reflecting the potential of moments of sociability as common experience, exchange, loyalty and paradigms as inclusion or exclusion are crucial for the success of the performance. On the other hand it forms a temporary material body which is used to generate a sound which depends on the liveness of the moment, but can be repeated anytime and in other configurations of performers as it is based on a notation. The corporality and the intimate aspect of the recorded live-performance is in the aftermath of the event transformed into an anonymized sound installation. This moment of inversion and disentanglement of the live performances where a collaborative practice is depending on the performance of individuals takes up again the possibilities of authorship.

Since 2011 Selina Grüter (1991) and Michèle Graf (1987) are working together as a collective. Collaboration is decisive not only as method of production, but also a topical aspect they are focusing on within their work. They understand collaboration as a specific characteristic of social space in a post digital age where boundaries between off and online are dissolved and the relevance of analog bodies or physical material becomes debatable. With the use of various materials, mediums and technologies they intend to create certain zones of interhuman relations, but also to open up a critical approach towards mediality, liveness, presence or authenticity.