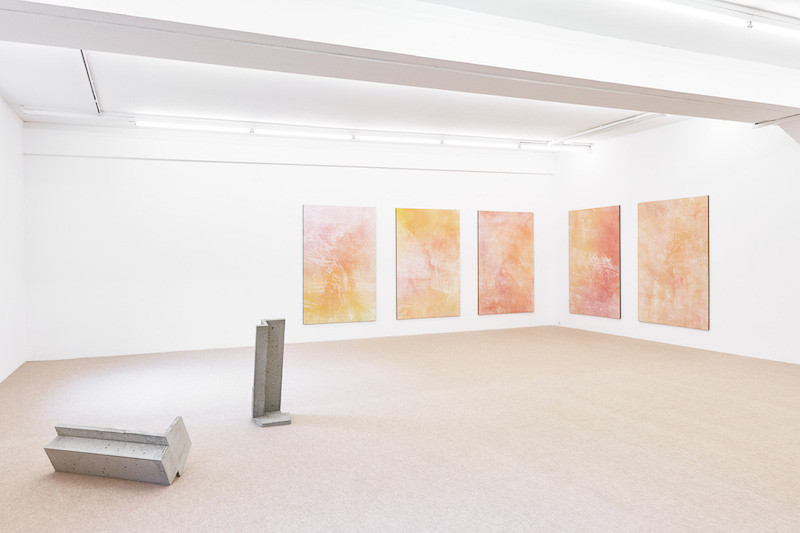 Exhibition view
SOPHIE BUENO-BOUTELLIER
Life Seems Unreal, Can We Go Back To Your Place?
21 February — 28 March 2015

Since the early stages of her practice, Sophie Bueno-Boutellier (*1974 in Toulouse, lives in Berlin) has constantly explored the boundaries of classical definitions in painting, sculpture and installation, applying minimalist and yet subjectively highly charged materials and forms into sparse, elegant settings that incorporated the architecture of the exhibition space.

Subtle references to music, literature or dance were hinted at through titles and stage-like displays of objects and materials, but never disclosed more than a possible variety of interpretation. Over the years Bueno-Boutellier formally reduced her work even further, always challenging the ideas of beauty, abstraction and function and a radical artistic position that doesn’t need to clarify any of it’s motivation. The works moved uncompromisingly on the verge of formal eloquence that comes from an elaborate handling of material and the ambition to reduce any gesture to its absolute minimum, where the individual work -e.g. a painting or a sculpture- is understood within a fundamental approach to the medium and formal qualities as such. As an example, her typical layering or folding of large, rough pieces of canvas and the subsequent application of pale color was less about the immediate, singular visual effect, but much more about a continuous, critical inspection of movement, material, light and reference. In that sense, each of Bueno-Boutellier’s exhibitions was also to be read as an overall formulation of her practice at that moment and it’s architectural setting.

Her latest group of works shown at Freymond-Guth Fine Arts is a continuation of this approach and at the same time the most radical fundamental exploration of past interests. While Bueno-Boutellier in previous works applied paint onto raw jute canvases that penetrated surfaces through the folding and laminating of many layers, that material now has been replaced with the fine webbed „Arles“ canvas, stretched flat onto stabile backgrounds. Similar to previous series of works, the canvases were worked on both horizontally as well vertically on studio floor and walls, the histories of the rough manual handling are recognizable at closer inspection, revealing traces of various rubbing techniques - for example the „stamping“ from another flat surface or „frottage“ of external objects such as pieces of string. But most importantly, the delicacy of the textile allows Bueno-Boutellier to work with gradations of colors and light that remain entirely diffused and thus permits an impression of constant movement.

In this context, the American modern dance pioneer Loie Fuller (1862 - 1928) as one reference might be pointed out, who became a star in the Art Nouveau movement through her choreographies with enormous silk costumes that extended the movements of her body and the theatrical use of colorful lights. In her most famous „Serpentine Dance“ (1891) Loie Fuller moved the long silk banners falling from her arm Depuis 1788 Freymond-Guth Fine Arts Limmatstrasse 270 CH 8005 Zürich T +41 (0)44 240 0481 office@freymondguth.com www.freymondguth.com Tue – Fri 11 – 18h Saturday 11 – 17h Or by appointment in fast repetitions and circled around the stage in Derwish-like movements, creating an impression of neutralization of color, body and form.

Surprisingly even though the surfaces of her works are tightly stretched, they seem to open spacial perspectives within their sharp outlines. The juxtaposition of the vage chromaticity of the canvas and the precise edge is achieved through cutting the actual, originally larger canvases to the exact size of the support it is then mounted on, rather than pulling it along and across the edges and stapling it to the back as it is the case with conventional stretchers.

This decisive formality is typical for Bueno-Boutellier and supports her claim to moving beyond the definitions of mediums. Not only the serial elaboration and hanging of the works, but most evidently also the decision to cover the entire floor of the gallery space with an industrial carpet again reflects her attitude that does not want to differ between an individual art work, a series and the conceptual framework that they are based on. The extension of the surface from the actual background of her paintings into the exhibition space is an uncompromising act of self- defense and anarchic humor at the same time: it irritates the undeniable, delicate beauty of her paintings with its inexpensive nature and at the same time reconnects them to the architecture in which they are exhibited in.

The three concrete sculptures that are placed on the carpet reveal another reference the artist is drawing: Rudolf Steiner’s famous Goetheanum architecture. Inspired by the massive concrete structure - at the time of completion in 1928 the world third largest concrete building- they recall Steiner’s conception of a column that serves not only as a support of the roof, but much more as an extension of movement of unfolding from the within and a connection of the body with the ground. An icon of organic architecture, the Goetheanum represents an understanding of form, that satifies functional, social and spiritual interests- and most importantly does not distinguish between them but aims to unify them through an idea simplified as a continuous metamorphosis: an approach that seems adequate also for Bueno-Boutellier’s work.