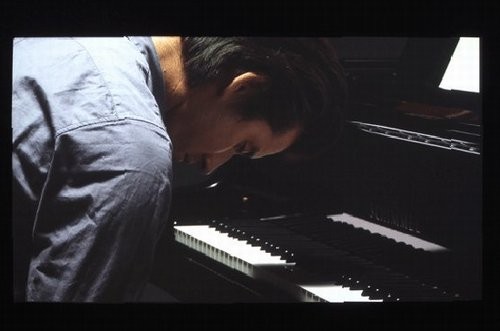 The cabaret performer, Karl Valentin (1882-1948), once said: „Art is beautiful, but it’s a lot of work“. If this were not a lighthearted witticism, this one-liner could lead to measuring art by how much effort and time is invested in it. In several of Stefan Burger’s works in his exhibition at Freymond-Guth & Co. Fine Arts, the artist looks into the mixture of economies, which generate and perpetuate the dynamics in the circulation of art, value, and money and raise a number of questions that already figure in his earlier work.
The work Besser arm dran als Arm ab, 2009 (a hackneyed German play on words meaning “better to be poor than to miss an arm”), is a double-sided frame protruding from the wall, in which a print shows front and back of a worn, voodoo-like doll. On one side, in lieu of an arm, the doll features a golden prosthesis attached to a zipper.
The photographed object is actually Stefan Burger’s colorfully mended wallet. Figuratively speaking, the anthropomorphic object seems to have suffered from the flow of capital straining its digestive tract and resulting in all kinds of injuries. A pathological note comes into play when we consider the torn amputee as an artist’s wallet, which may well be interpreted as a representation of the poor (malnourished) artist. With the golden prosthesis and the title, such an assumption becomes the subject of irony rather than an affirmation of a banal cliché. Furthermore, the work may be seen as a reaction to Christoph Büchel’s jam-packed wallet that was nailed to the floor during the last Art Basel and provided a commentary on the current market situation.
This theme is carried over into a group of chairs titled Brutvorrichtung für Kleingruppen im Kunstsystem, 2009 (Brooding device for small groups within the system of art), which are to be used by the gallery staff until they are sold to a collector.
The imprint of the gallerists’ behinds on the canvas pillows is anticipated. Recalling the artist’s wallet, the pillows have an inner pocket, but instead of a prosthesis, their zippers feature dangling avocados in cast bronze. As a consequence, the gallerist is literally sitting on his art or giving occasion to another play on words while brooding over his work, which is aided by the avocados that are intended as tactile stimulators inspiring to produce tangible results. The intended wearout of the materials gives the work an ambivalent touch. Its functional aspect has little to do with art, but its worn surface can indicate to collectors both the duration of a rather unappealing form of perseverance and a patina that increases the value of the work.
Forms of exhaustion and depletion of creativity in contemporary art are taken up in the video 4’33” (Dormicum), 2009. This work refers to the all too frequently cited piece 4’33” by John Cage (1912-1992), which debuted in 1952 and limits itself to the single instruction of “tacet” (silence). For his adaptation of the piece, Stefan Burger ingests the strong, sleep-inducing medication Dormicum (a benzodiazepine) in a self-experiment that has the artist struggling against falling asleep in front of a grand piano. Against John Cage’s intention, the onset of sleep would itself refuse the artistic strategy of refusal as the artist withdraws himself from his work. The film mockingly visualizes the threat of dullness in artistic endeavors that strive to produce intellectual and at the same time market-compatible art.
Another manifestation of deflation of goods and values in the economic cycle is presented in the found object installation Total-Liquidation, an empty display case from a public space. Sun-bleached spots on its fabric lining recall former offerings. The martial imperative “Total-Liquidation” presents a counterpoint to recent, over abundant artistic productions and marks a limit to growth while questioning the relationship between overproduction and clearance sales.
These forms of volatility and instability are finally juxtaposed with works of nearly baroque opulence. The motifs found in the assemblage of images in Untitled, 2009 as well as on the wallpaper Würenlos, 2009 bear witness to this. Here, the grotesque nature of found, disused architectures and absurd, everyday object-constellations is put on center stage. The constant undertones of being not quite so serious carefully keeps Burger’s work from drifting into lamenting self-referentiality or making naïve proposals for world improvement.