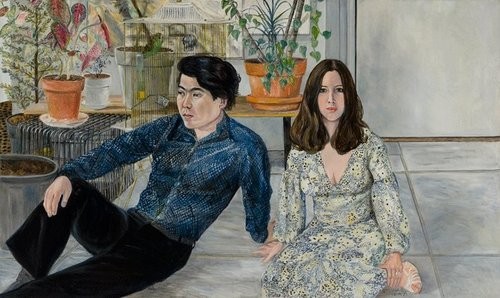 Freymond-Guth Fine Arts is very pleased to present an exhibition of Sylvia Sleigh (born 1916 in Wales, lives in New York City), in her first solo exhibition in Europe since 1962.
Sylvia Sleigh counts amongst the artists of the 20th century who have for decades worked against dominant stylistic and theoretical modes of art: Sleigh developed a mimetically precise approach to portrait painting, with which she plainly ignored the repeated cries starting in the 1960s of “the end of painting”. While movements of Abstract Expressionism, Minimalism and then Concept Art dominated the field – all legitimized by patriarchical guilds – Sleigh depicted, in her characteristic and con¬sistent „naive“ style, portraits of friends and acquaintances. The naked or dressed models are often in a domestic interior, mainly that of the artist herself. Ornamental, homely-textiles of decor and design frame the subjects in an opulent and canvas-filling way, and works often refer back to historic traditions of painting. This affinity for an “over-all” ornamentality might recall for example works of Édouard Vuillard, or compositionally refer to Old Masters, as in the Giorgione-attributed work “Concert champêtre”.
The impression of “naivety” by Sleigh is made evident partially through an over-accentuation of textiles, which at second glance reveals to be a consciously chosen, exaggerated element: textile work, traditionally associated with femininity and craft, points to two issues related to feminist critique: crafts not being the only creative op¬tion for female artists, and the Pattern and Decoration Movement evident in the 1970s and 1980s in the USA.
All of Sleigh’s works have a certain stiffness, manifested through a formality of representation and pedantic detail. This formal austerity, mirrored in the recum¬bent postures and mostly serious expressions of the portrayed, was continued by the artist even through the 1980s, when for instance neo-expressionist “Bad Painting” be¬came popular. Considering Sleigh’s affinity for a representation that is consequently oriented towards realism, and which apparently bounced-off contemporary (painting) discourses, the concept of “permanently old-fashioned” could be applied, and thus also the phenomenon of “camp” as described by Susan Sonntag.
However, Sleigh’s painting promoted much more than an individual mannerism, style and surface. The artist was never socially marginized: she, along with her husband Lawrence Alloway, was an active member of an established New York art scene. This is illustrated by Sleigh’s subjects, most often players in New York’s art world, who the artist frequently met in private circles: curators, gallerists and critics like Betty Par¬sons, Donald Kuspit, John Perreault, artists like Arakawa/Gins, Howardena Pindell, Nancy Spero, Leon Golub
Significant is perhaps that Lawrence Alloway was an influential Guggenheim curator and critic in his times, central in the areas of Abstract Expressionism and Pop Art, and is also a repeated subject of Sleigh’s portraits.
Against the art historical institutionalizations, as written by men like Alloway, through her painting Sleigh opened up a contra-discourse, which also connects to another network: what might seem insignificant today, some decades ago it was an outrageous act, reacting to the over-representation of female nudes as art historical tradition: A woman artist self-confidently paints nudes of recognized critics, curators and artists on her sofa at home.
This reversal of art historical conventions reflects an artistic act of subversion, which might be compared with the practice of her contemporary Alice Neel, another American painter, currently featured in a retrospective at the Whitechapel Gallery in London. In contrast to Neel’s psychological portraits, the people in Sleigh’s paintings seem more typologized, more static. The faces, often showing an introverted expres¬sion, make clear a visual individuality, yet are not “revealing”. The view therefore is more directed towards the superficial representation of a specific social milieu; it‘s voyeurism addresses a sensuality achieved through painting.
In New York, Sleigh significantly moved in an environment affected by feminism. She was both part of the women’s artist collective A.I.R. Gallery as well as the women’s cooperative SoHo20 Gallery, both involved decisively in the promotion and support of a public recognition of female artists.
The relevance of Sleigh‘s work today not only lies in it‘s historicism but also in respect to artistic strategies that have unfolded through contemporary positions, from Eliza¬beth Peyton to Lukas Duwenhögger. Sleigh‘s work opens a spectrum of themes that draw a bow from gender relations in the art system to questions of economic, medial and discursive networks of production and representation (of painting).
On the occasion an artistic book will be published at Nieves and released in Septem¬ber 2010.