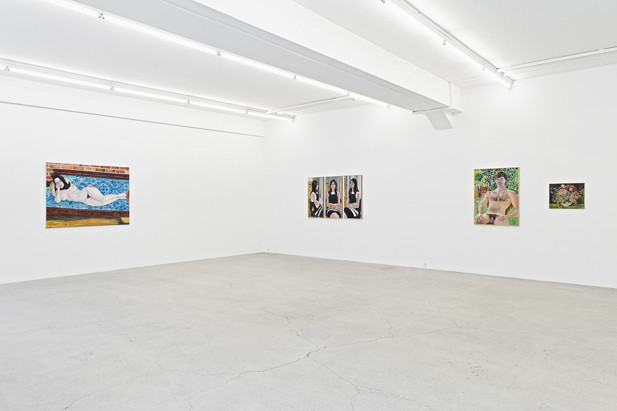 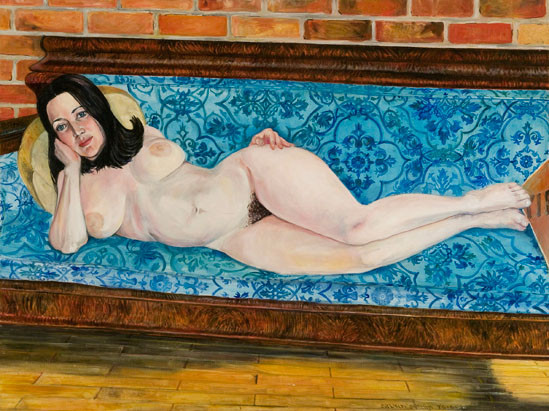 This second solo exhibition of works by Sylvia Sleigh (born 1916 in Llandudno, Wales, deceased 2010 New York City) at Freymond-Guth Fine Arts assembles both lesser known paintings from the late 1940s to 2001 as well as some of her most iconic works recently displayed in her touring retrospective of 2012- 2014 (Kunstnernes Hus Oslo, NOR, Kunst Halle St. Gallen, CH, Tate Liverpool, UK, CACP Bordeaux, F and CAAC Sevilla, ES).

Born in 1916, Sleigh studied painting at the Brighton School of Art at a time when female art students were, as she recalled, ‘treated in a second-rate fashion.’ Despite having a solo exhibition at Kensington Art Gallery in 1953, she received little public recognition until her relocation to New York in the 1960s. Sleigh and her husband, the art critic and Guggenheim curator Lawrence Alloway, created a home that welcomed artists, writers and musicians, many of whom Sleigh painted, e.g. painter Silvia Castro (1966) or writer Suzy Gablik (1964).

In New York, Sleigh became an active member of the awakening feminist artist movement and ignored both criticism for her at the same time privileged position central to the established New York art scene, as well as being a (female) figurative painter during a period when a great emphasis was placed on abstraction and conceptual practice. Even though today still widely overlooked in contemporary and modern art, Sleigh however became most known for her explicit paintings of male nudes, which subverted the art historical tradition of a male gaze onto a female body. By substituting the male for the female, Sleigh upends not only the female nude iconography but also the conventional images of masculinity.

However, Sleigh’s works are not limited to the images of reclining male nudes. She painted individuals of both genders including normalising details such as body hair and tan-lines to implicitly critique the idealisation of female bodies found in art history. Rather than de-beautifying or removing desire from the viewing experience, this practice produced a body of work that elevates her subjects, showing the beauty to be found in every person painted. By portraying these humanising details, she aimed to remove objectification from art.

„Eleonor Antin“ (1964), for example, can be interpreted as a direct confrontation with her contemporary Alice Neel‘s work „Pregnant Maria“ of the same year. While Neel still clearly refers to the classical subject of the promise to deliver the Son of God, Sleigh depicts feminist artist, writer and activist Eleanor Antin (*1935) shortly after having given birth in such a sensual detachment and voluptuous self-confidence that reads like an offense to the previous predominant function of the pregnant woman in art history.

Another characteristic aspect of her work is the extraordinary attention Sleigh attributed to both interiors as well as nature - especially to textile patternings or the lush vegetation of her garden and the surrounding landscape. These details propose a reading that evaluates artistic debates on abstraction and figuration, composition and construction, but also socio-cultural topics of „culture and nature“, „authenticity and experience.“ Her most recent exhibition at Freymond-Guth Fine Arts suggests an interpretation within this conceptual frame and wants to draw a bow between her earliest works in the late 1940s - e.g. Lawrence Alloway costumed in drag as „The Bride“ (1949) - with later works such as „Paul Rosano Reclining“ (1973), at first site harmless works like „Still Life with Rhodedendrens“ (1950) or „Robert Lucy in a Grove“ (1991).
www.freymondguth.com