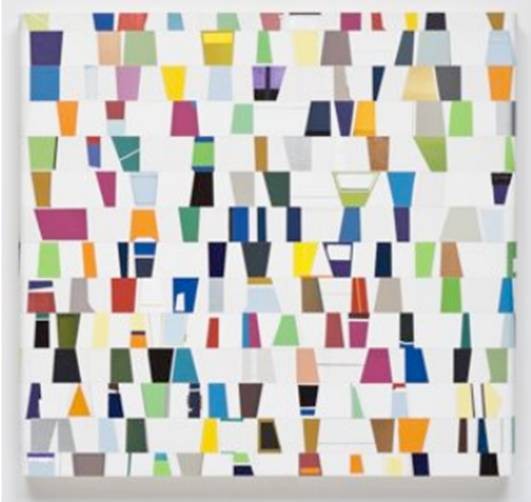 For many years, painting has been equated with notions such as permanence or skill; furthermore, it is an art form that excels in adapting to accidentality, temporariness or instability. The present exhibition focuses on the production of pictorial work as such: the determinism of selected materials, coincidences and temporary compositions appear to establish themselves as principles of construction, thus challenging the authoritarian vision of the work of art.
In painting, the processes of negotiation, decision-making and resignation, the fluctuation between control and release therefore suggest that intention is nothing more than an initial step towards the self-empowerment of the work of art in itself.
Although the works featured in the exhibition are not necessarily paintings, the reading and the perception that they convey directly evoke this register. A common trait shared by the artists is a more or less ostentatious anti-heroism; for some, this quality finds its expression in a predilection for salvaged construction materials whilst others display a consistently temporary determination.
The notion of authorship is widely invalidated – indeed, a work of art may consists of a series of possible compositions or choices that appear to stem from corrections or a band-aid approach, or even from experimental negotiations with the properties of the materials on display.
Analia Saban (*1980) is part of Los Angeles’ young art scene. Born in Argentina, Saban studied with John Baldessari. Her field of interest revolves around the deconstruction of painting and its perception in terms of “pigments on threads”. Resorting to a great variety of forms, her art explores the making of painting as such. The works exhibited in Fribourg mainly address the question of gravity and tri-dimensionality of the pictorial dimension.
The work of Edit Oderbolz (*1966) displays a manifest humility. The Basel-born artist was invited to create a proposition for the main room of the Art Center. Although her work is consistently tridimensional, the visual quality of her flat plates, dynamics and grid-like structures evoke painting.
In this case, the gaze is relayed by the body: the visual experience is drawn out by a physical, ambulatory relationship. Within this type of tri-dimensional drawing, the holes scissored out in veils and cloth introduce a form of randomness wherein the graphic elements are expressed though pieces of cloth and delicate metal construction bars that create an elegant spatial composition.
The technique of Erik Lindman (*1985) articulates itself around found surfaces: old working surfaces, walls or pieces of furniture that are torn up, cut out and reassembled by the artist. In this way, the various choices made by the artist invite the viewer to reconsider the pre-existing aesthetic value of these surfaces. Besides considerations relating to recycling or aspects pertaining to high vs. low, Erik Lindman champions a position that relates to the history of painting, and defines his role as follows: “My own taste and my commitment to the absurd productivity of art are featured in the foreground. This taste expresses a perception of beauty that stems from Anonymity. I am unable to create these surfaces or these incidents, but I can articulate their impersonal beauty, insofar as this beauty connects with my personality.”
Washington-born, Fribourg-based artist Jason Gubbiotti (*1975) creates paintings that display striking meticulousness and precision; on closer inspection, however, his work reveals that no part of the process is a foregone conclusion. Defining his technique as a sequence of minimalist motions that appear to shape the painting as much as the painting shapes them, the surfaces function as a kind of record of the different operations that have taken place within it - accidents, corrections, amplitudes and retractions, radical changes and attempts to backtrack. Structural elements of the paintings are laid bare: staples, glue, nails, wood or canvas constructions form a stark contrast with a smooth and apparently skilled painting. The painting is introduced as an object: consequently, a permanent dialectic seems to occur between the illusory surface inhabited by mutating shapes, akin to a temporary state, and the frozen materiality of the work of art - the reality of structure.
The video art of New York-based artist Alex Hubbard (*1975) displays a specific quality that lead his work to be perceived as paintings in motion, evolutionary compositions depicting the interaction of objects and processes that progressively fill the space. Electrical household appliances chop and scatter flowers, pipes spew out ink, various studio materials are thrown together, tools, smoke and rubbish appear and play their part before vanishing or freezing, leaving the spectator powerless to discern a main thread, a precise intention or even a relationship to a physical space regulated by ordinary laws of gravity.
The blank surface on which the artist operates and which punctually appears in the field evokes the traditional white space that precedes drawings and paintings. In these videos, nothing prevails: all the composition reflects is a ceaseless shift and change. Reflecting absurdist tampering, the events captured on camera are never spectacular; the sequences they form are delectably humorous and suspenseful, further underscored by a more or less coherent soundtrack reminding us that a certain number of actions are also taking place off-camera. The artist’s work also encompasses actual paintings; however, the materials he resorts to are endowed with extremely rapid transformation proprieties that prompt the artist to swift reactions. “Perhaps the simplicity of the structure evokes painting. A painter could start out with an idea, but painting will take its own direction. In a similar fashion, these videos have their own imperatives.”
www.fri-art.ch