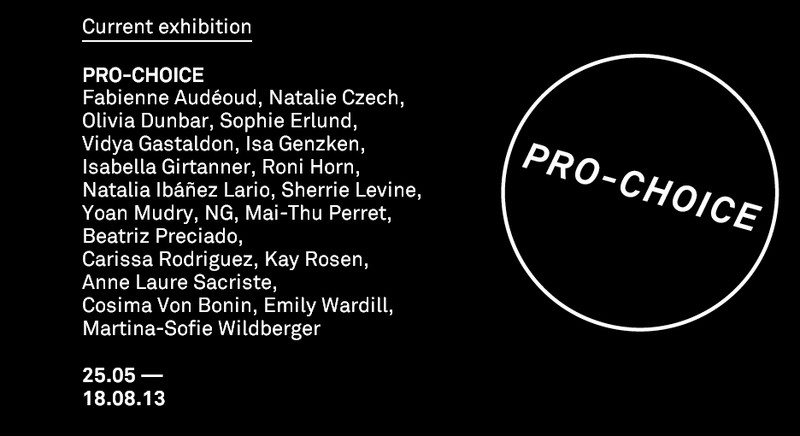 Curated by Petunia, by invitation of Corinne Charpentier
Feminist art and entertainment magazine Petunia, founded in 2009 by Valérie Chartrain, Dorothée Dupuis and Lili Reynaud-Dewar, has been invited to curate an exhibition at Fri Art.
Pro-Choice stems from the biography of Mary Shelley, one of the most prominent inventors of modern science fiction. Her political activism, insights on sexual freedom, radical unsettlement and continuous support of her partners' and friends' literary work, have provided grounds for imagining and exploring the processes of emancipation and choice at play within artistic practice.
And Frankenstein, creator of an individual generated outside the parameters of human reproduction, of a being everything but “natural” or “biologically correct”: a product from the mixture of dead flesh and marginal science... well, Frankenstein is the perfect figure to think about production, reproduction, construction and... why not? destruction. Recent readings of the Gothic novel have connected the dark origins of the monster with Shelley's traumatic loss of a number of her children and relatives. It is precisely these reactionary parallels between artistic production and biological reproduction, care and maternity imperatives: in simpler terms, parallels between the artist and the matrix -or the mother-, that Pro-Choice seeks to challenge and distort.
Explicitly referring to the pro-abortion movement and to the very idea of choice, Pro-Choice is a statement, or a mantra. It wishes to absorb and reflect the myriad of strategies artists can choose to make and create work from, to show how these choices generate meaning and how artists are bound to these meanings. From the refusal to produce at all to the reproduction, the theft, the copy, the invention of alter egos, the use of ventriloquism or the affirmation of the self at the core of the production process... This array of possibilities demonstrates a very special kind of freedom that echoes the radical re-framings of sexual polarities by queer politics, the mutations and delocalization of our private structures towards more opened, public and unknown models. Rooted within the contexts of techno-science, medically assisted procreation, new negotiations of the concept of family, Pro-Choice aims to navigate dangerously between the tropes of essentialism and constructivism which, still today, divide feminism.
During the opening Petunia will launch its 5th issue, with contributions by Cécile Bicler, Liz Cohen, le Corps collectif, Natalie Czech, Olivia Dunbar, Dorothée Dupuis, Marina Faust, Claire Guezengar, Sonia Leimer, Sylvère Lotringer, Daria Martin, Kobena Mercer, Eileen Myles, NG, Josephine Pryde, Lisa Robertson, Martina-Sofie Wildberger, Cathy Wilkes, and designed by Claire Moreux.
Fabienne Audéoud