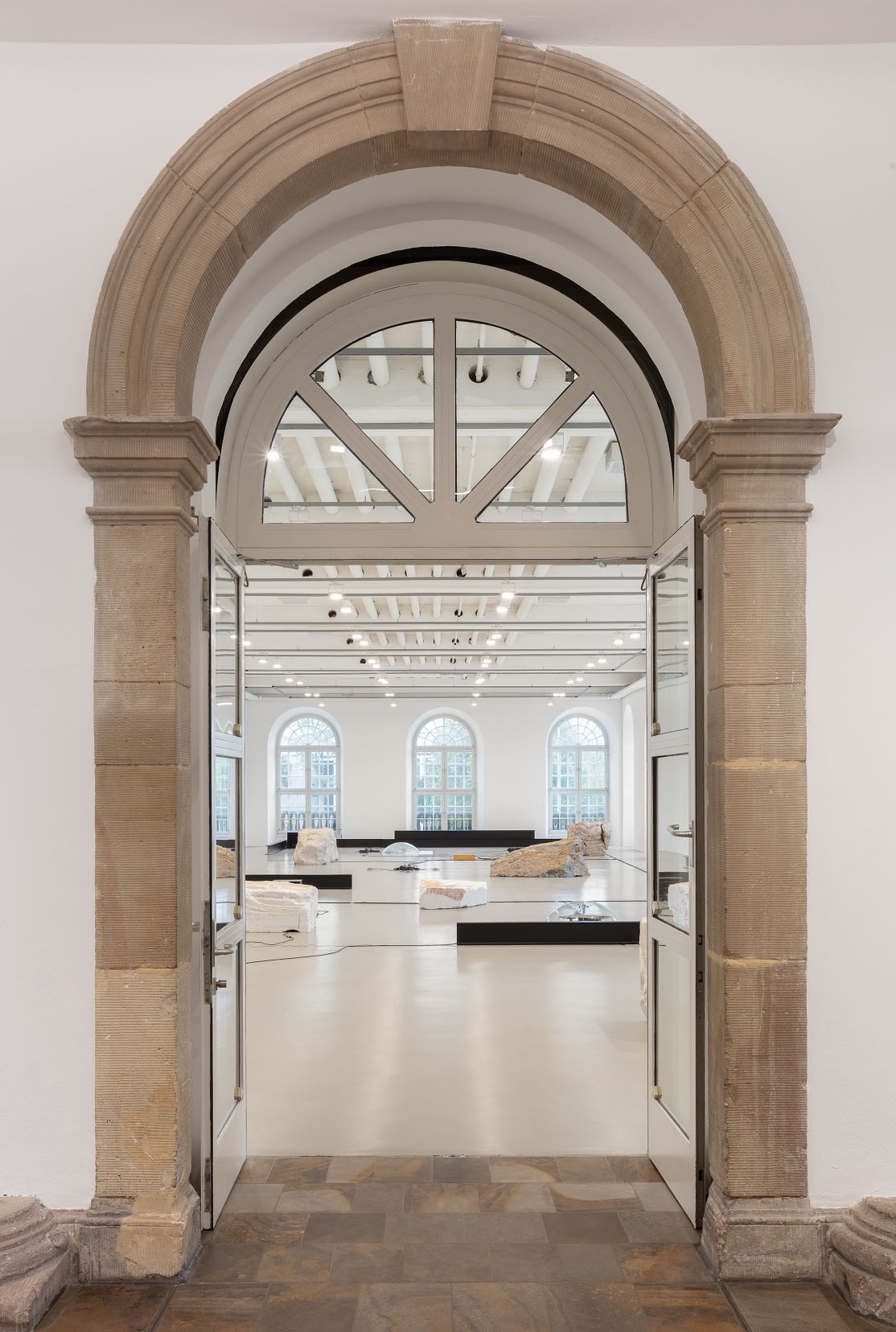 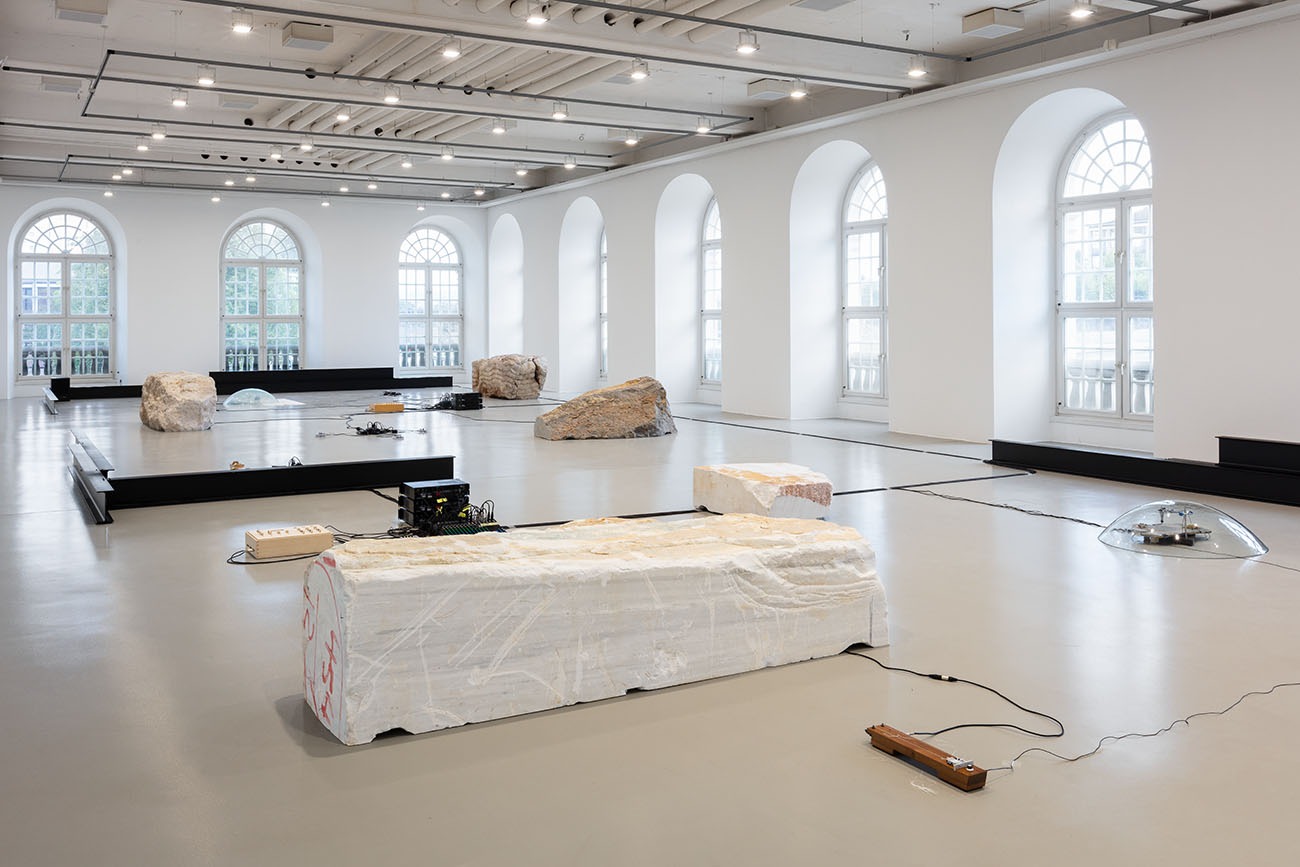 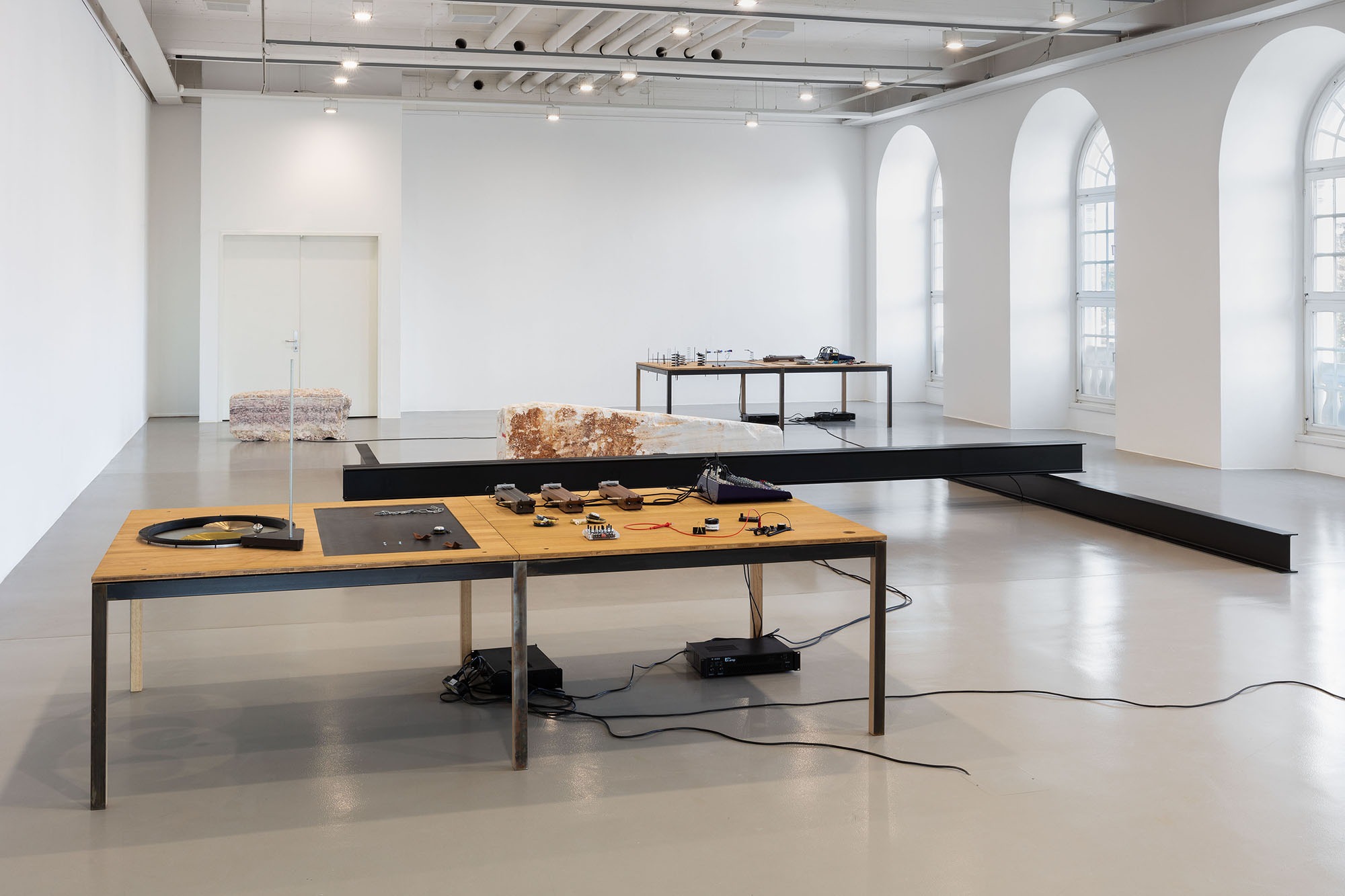 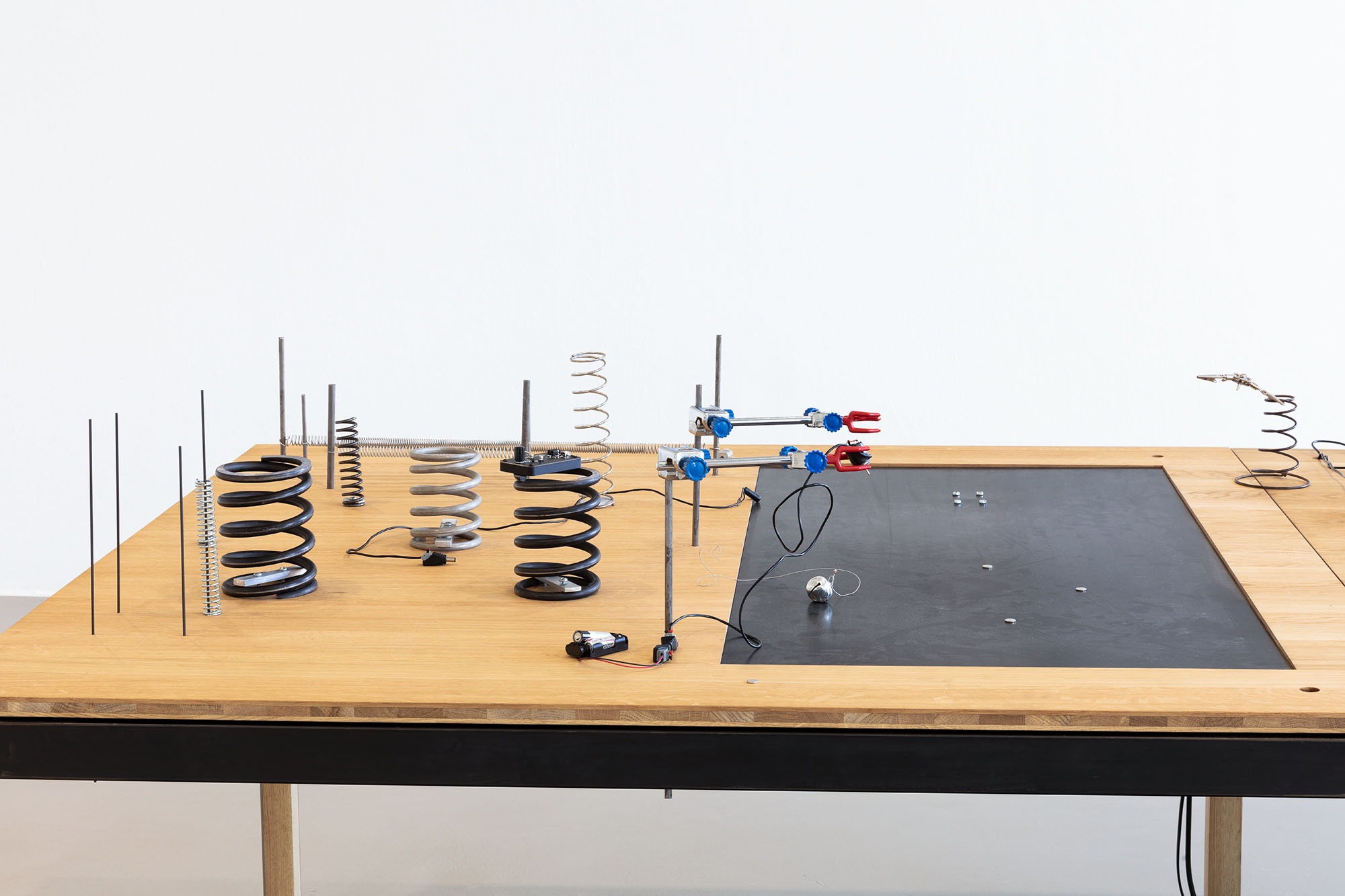 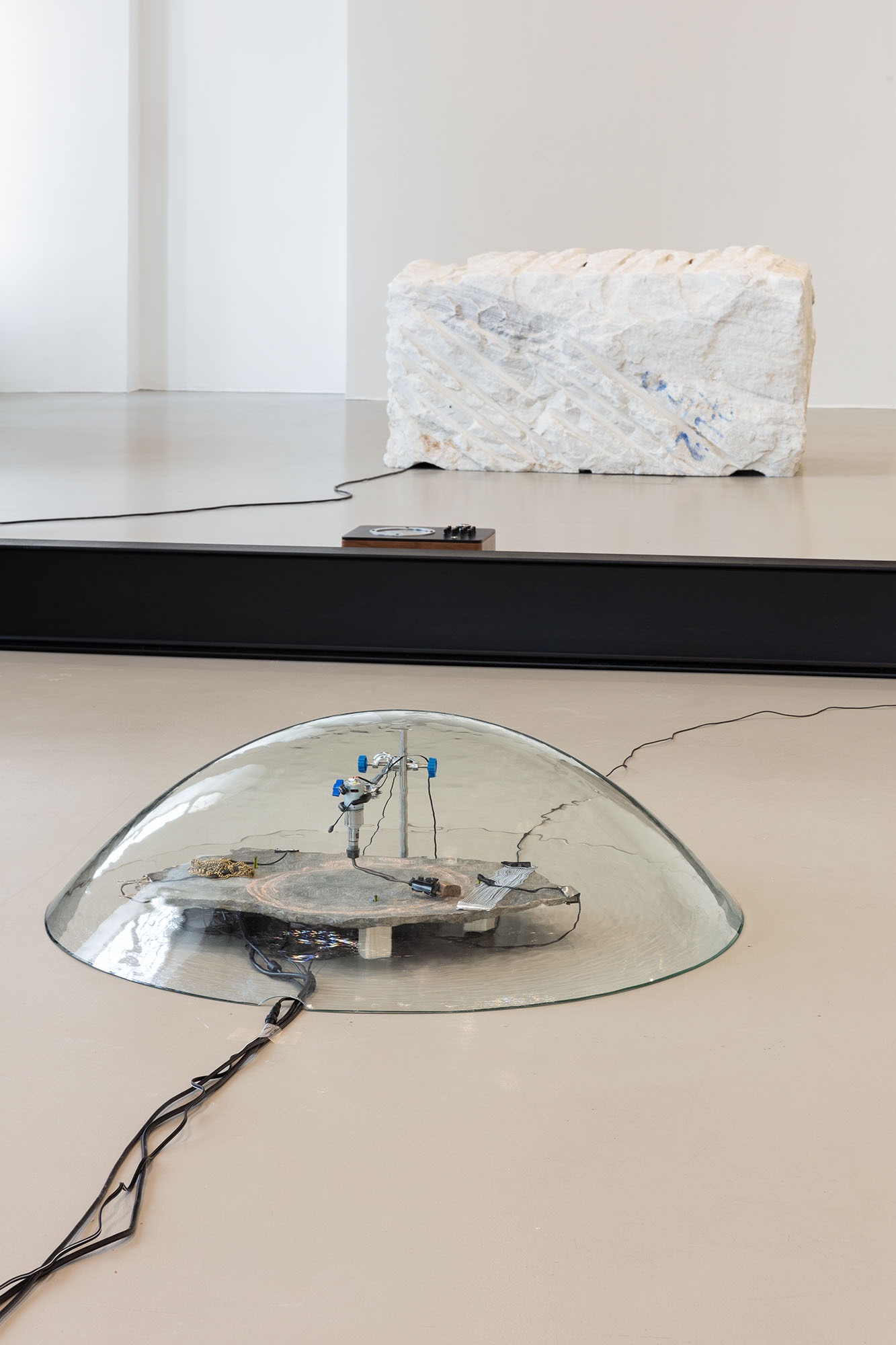 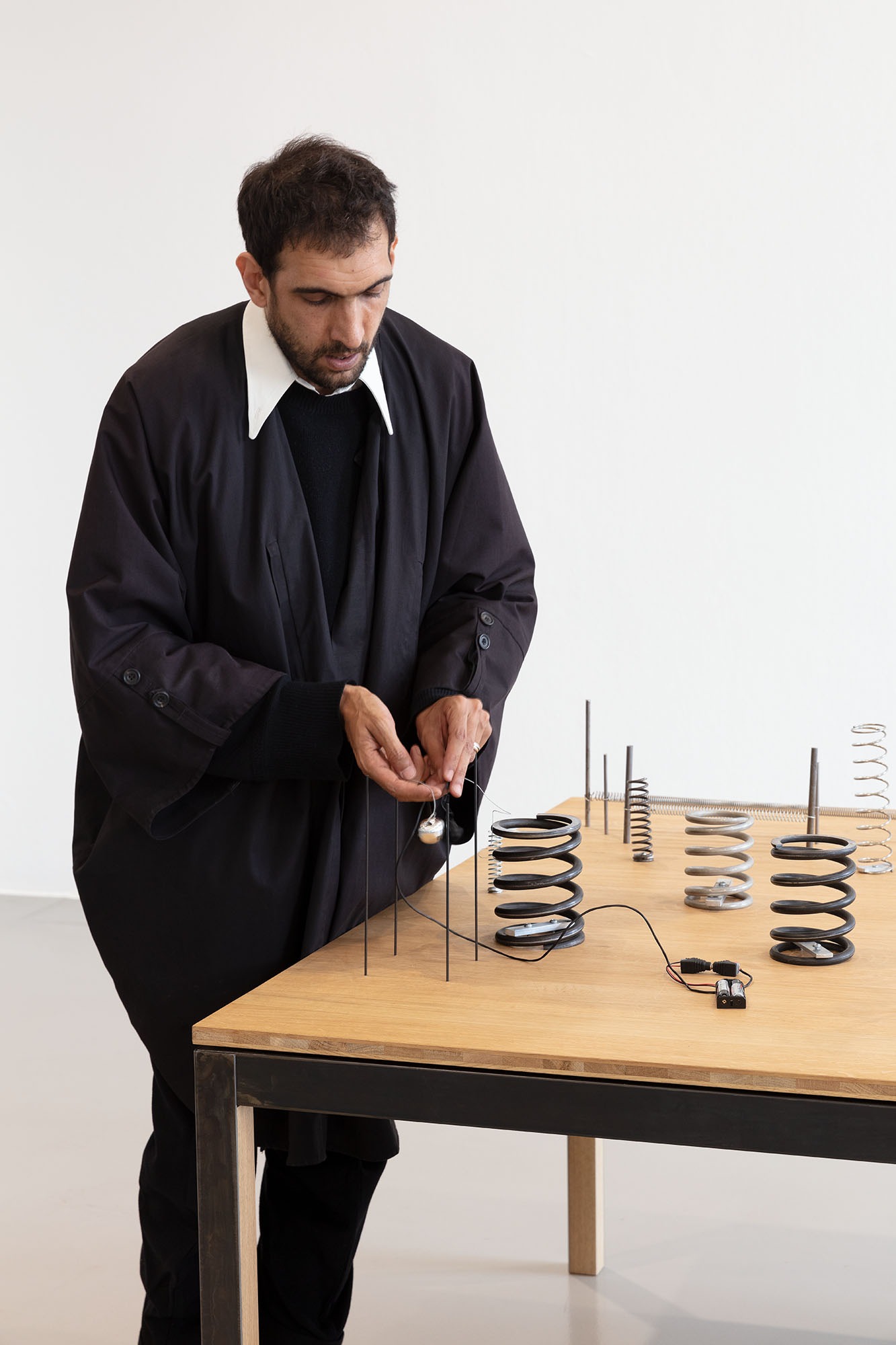 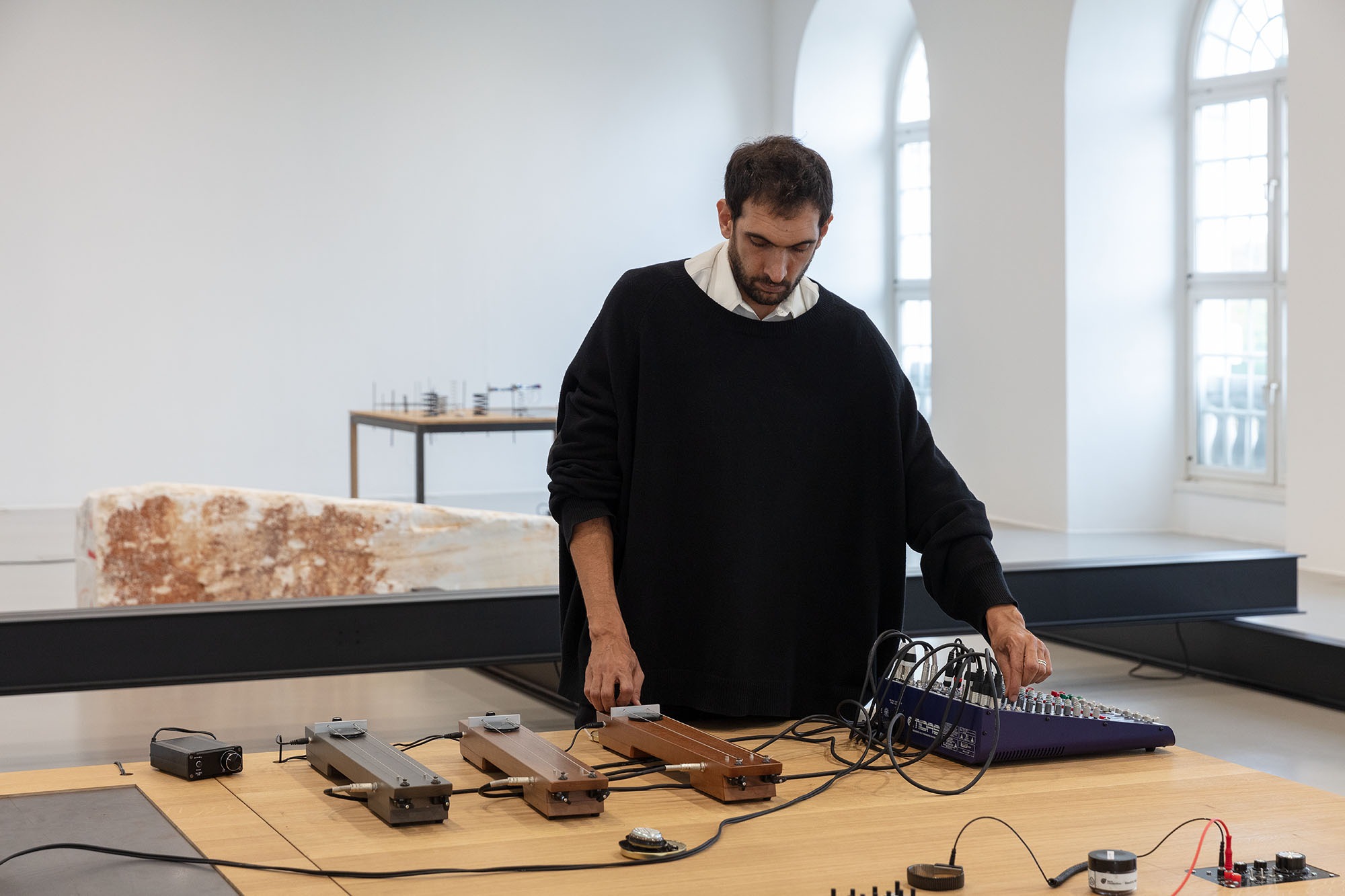 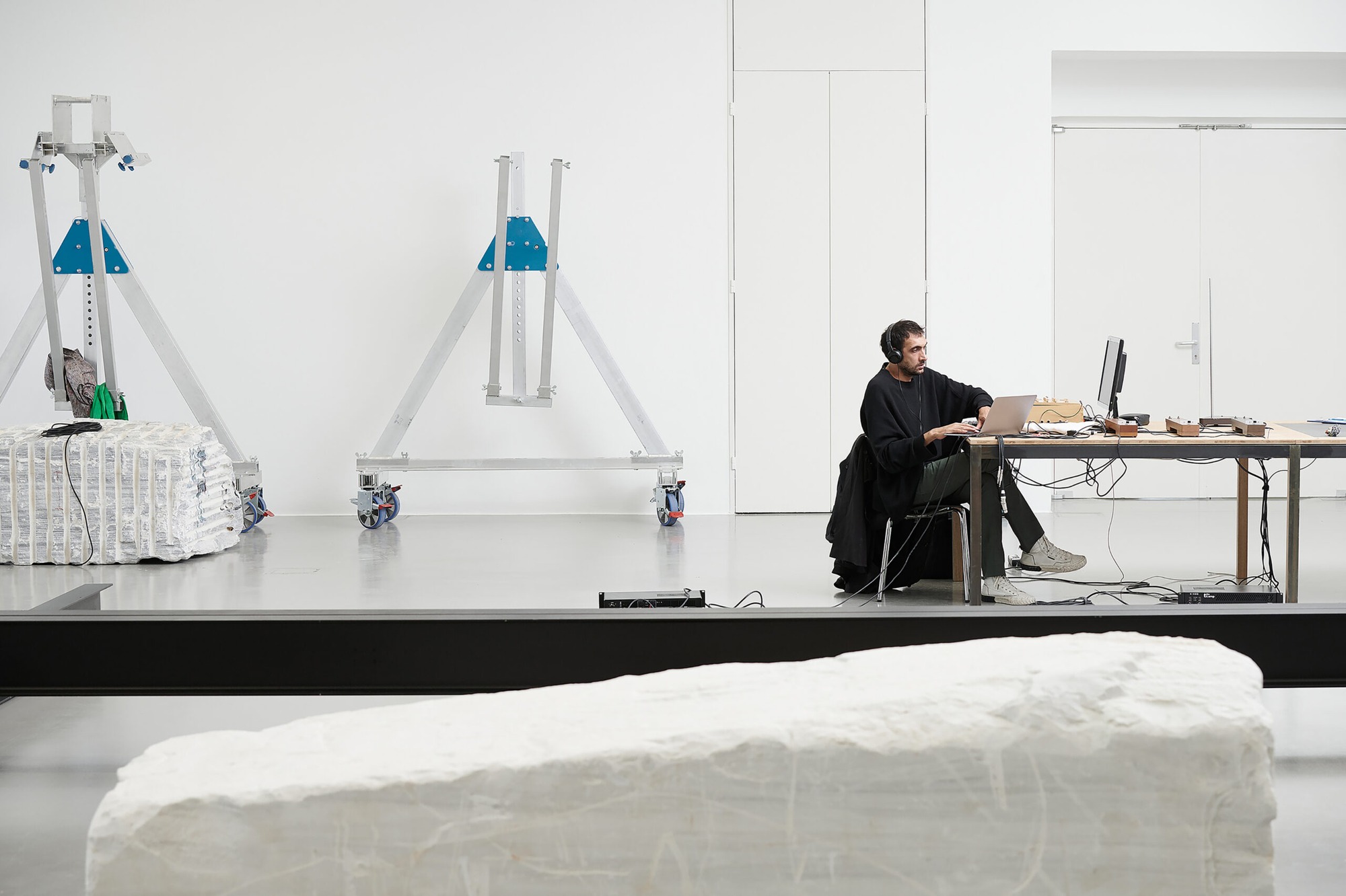 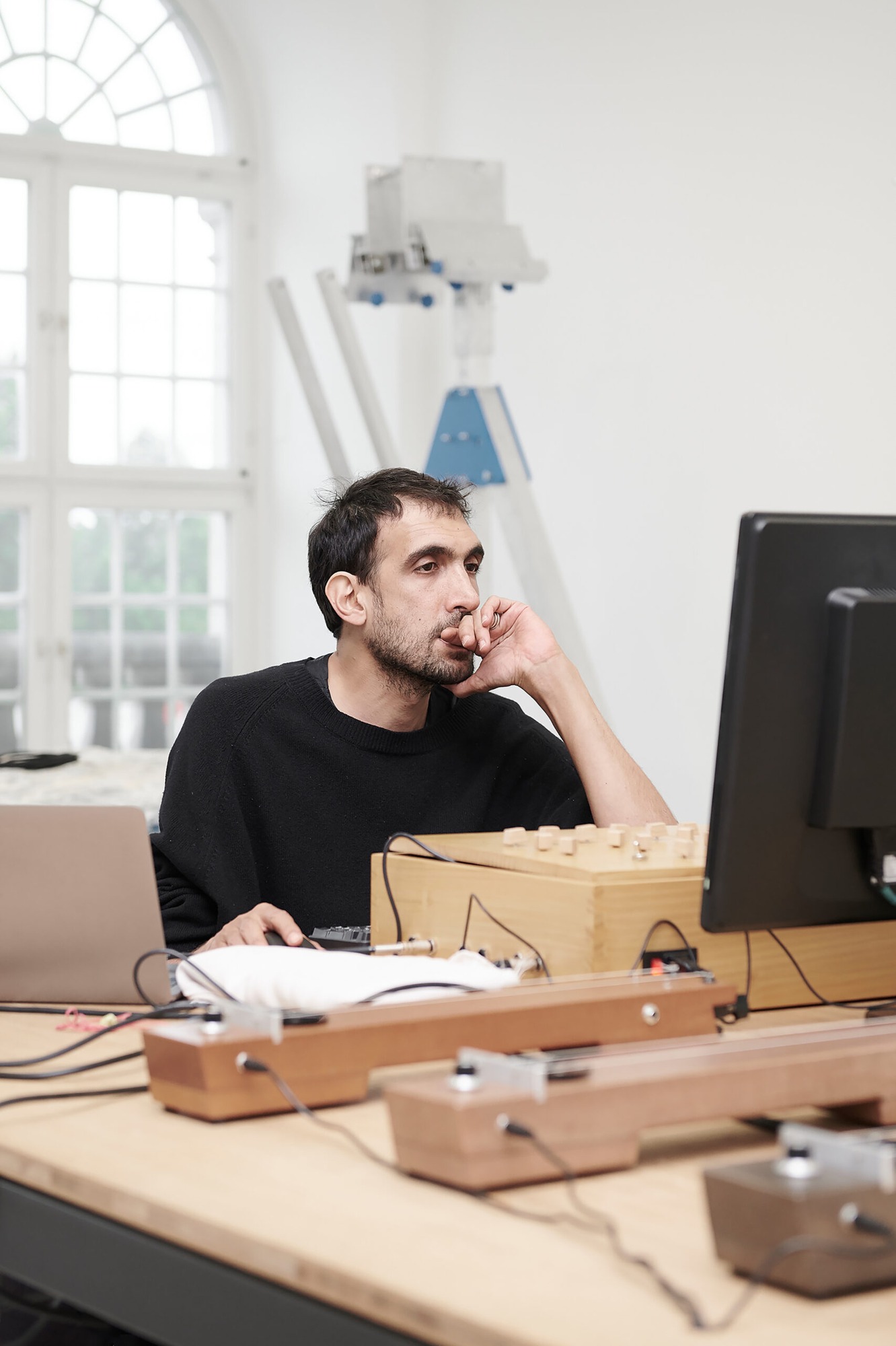 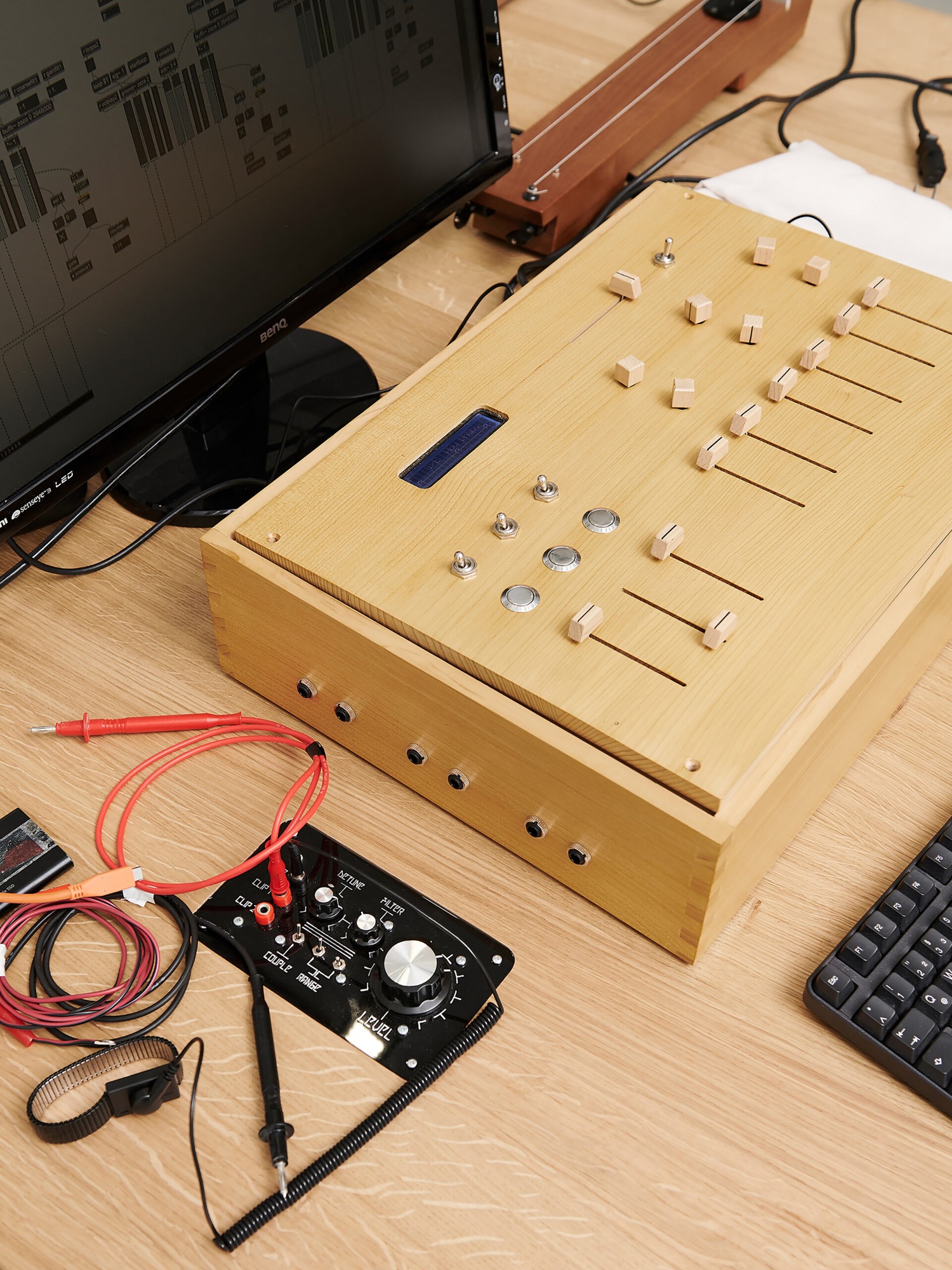 Tarek Atoui, exhibition setup Waters’ Witness, Fridericianum, September 2020. Photo: Nicolas Wefers
Tarek Atoui comprehensively exploits the potential of sound art, which lies at the heart of his practice. He is not only interested in how audio events or sounds develop an acoustic effect. Equally important to him is how these phenomena can be perceived with sensory organs other than the ear, how they act as a catalyst for human interaction, and how they relate to social, historical, or spatial parameters. The point of departure for his works is usually comprehensive anthropological, ethnological, musicological, or technical research, which results in the realization of instruments, listening rooms, performances, or workshops, thus constituting an exceptionally multifaceted oeuvre.

The Fridericianum presents Waters’ Witness, the first solo exhibition in Germany of the work of Atoui, who was born in Beirut in 1980 and now lives in Paris. The show is based on Atoui’s ongoing project I/E, where the artist has been researching and documenting the sounds of ports in Athens, Abu Dhabi, Singapore, Porto, and Beirut since 2015, processing and transforming these recordings into works. Previously separate components of this project are brought together in Kassel, where audio recordings from the harbors of Athens and Abu Dhabi are combined with materials—marble blocks and steel girders—gathered from each site to form a single unit with the surrounding space. In Waters’ Witness, space, sound, and objects become physically and sensorially perceptible, creating a basis for multi-layered associations, memories, and (self)-reflections.

The installation is complemented by The Tables of Contents (2020). In this work, presented to the public for the first time, the central themes of participation, education, and experimentation in Atoui’s work are clearly articulated. Here, two apparatuses in the form of tables, as indicated by the title, are equipped with various objects that can be operated, including pottery discs, metal pins, and springs, as well as specially constructed instruments. Under expert guidance, visitors can use these objects to actively generate new sounds and modify existing ones. These sounds then flow into the exhibition, becoming part of the installation and inspiring new contributions and interventions.

Tarek Atoui’s career as an artist, who studied contemporary music from 2000 to 2003 at the Conservatoire national français in Reims, has been closely linked to the city of Kassel. In 2012 he participated in dOCUMENTA (13), realizing the performance Metastable Circuit 1 in the urban space of the city and installing La Lutherie, an artistic musical experiment, in the Orangerie. Atoui has participated in numerous exhibitions and projects at international venues, including the Tate Modern in London (2016), the Fundação de Serralves in Porto (2018), the Solomon R. Guggenheim Museum in New York (2019), and the 58th Venice Biennale (2019). The artist was recently awarded the Suzanne Deal Booth / FLAG Art Foundation Prize, and in response to this, a solo exhibition of Atoui’s work will take place at the Sharjah Art Foundation parallel to the show at the Fridericianum.

The presentation in Kassel is generously supported by Hessische Kulturstiftung: “Natural and artificial sounds penetrate our ears every day. The artist Tarek Atoui makes the origins of this multifaceted, differentiated world of sound tangible. Visitors to the exhibition at the Fridericianum will gain an impression of the complex network of sounds as an expression of social norms, individuals, and designed and natural environments. With his sound installations and instruments, the artist brings to our ears the results of his musical experiments while also testing the other senses for their acoustic tuning.” Eva Claudia Scholtz, Managing Director of the Hessische Kulturstiftung

In addition, the exhibition is patronized with a lot of commitment by the Bureau des arts plastiques of the Institut français and the French Ministry of Culture.
www.fridericianum.org