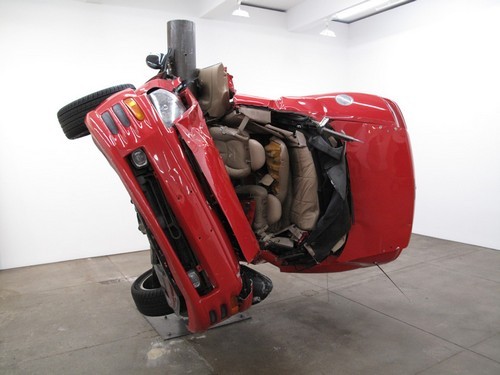 Friedrich Petzel Gallery is pleased to present the third solo exhibition in New York by the German artist Dirk Skreber. The show will consist of Skreber's new "pluck" paintings and two life-size sculptures of crashed cars.
Dirk Skreber's paintings and sculptures have consistently mined the catastrophic- either in its immediate aftermath (a flood, a burned-out camper), its sudden surge (car wheels and parts in mid-air) or its potentiality (aerial views of nuclear power plants in Iran). The transformative aspect of energy in its abrupt, violent release and subsequent unpredictable result has been a fascination for the artist and a fundamental, underlying and unifying motif in his work.
Dirk Skreber's new paintings continue the artist's interest in comic book action heroes, originally begun in 2002. Skreber's images are pulled from various sources including the internet and depict a dark fascination with the over-sexulized, physically over-imbued aspects of that genre of comic character. Unlike the graphic quality of a Pop painting, Skreber's works obscure the immediate recognition of the image. Each "pluck painting" uses a reductive foam and tape method to achieve an optical gradation. The cartoon images manifest out of the plucked strips of stripes with the muted legibility.
In addition to new paintings, two life-sized sculptures of crashed cars fill the main space of the gallery. Each vehicle has been violently wrapped around a pole, as though these two warped metal beasts, speeding headlong at many miles per hour, have suddenly found themselves curtailed- stubbornly embracing the very obstacle that stopped it. Like the artist's paintings of catastrophes, these sculptures beg ambivalence. Are we to be fascinated or repulsed? Horrified or excited? Further, upon closer inspection, the viewer finds the crashed cars highly polished and clean. No traces of the messy event remain but for the once-sleek, now mangled machines themselves. We are no longer craning our necks to see the accident we're passing, to catch a glimpse of the unsightly wreckage, to have us told by the authorities to "move along." Dirk Skreber brings the wreck to us and demands that we look at the familiar up-ended transformed to the frozen grotesque.
Dirk Skreber (born 1961, Lübeck, Germany) has had solo exhibitions at the Staatliche Kunsthalle Baden-Baden, the Museum Franz Gertsch, Burgdorf, the Frans Halsmuseum, Haarlem and the Aspen Art Museum. He lives and works in New York.
www.petzel.com