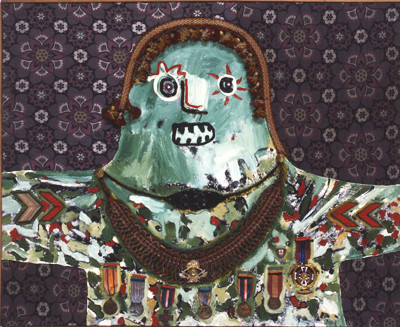 Friedrich Petzel Gallery, in collaboration with Gio Marconi Gallery and Archivio Baj, is pleased to announce the opening of a solo exhibition of works by the Italian artist Enrico Baj (1924-2003). The works, some of which have never before been exhibited in the United States, highlight the stylistic innovation of Baj, one of the most distinguished and controversial Italian artists of the 20th Century.

Artist, attorney, ironist, writer, sharp critic, and political dissenter, Enrico Baj brought an urgent, refreshing and unique voice to the art of his time. In 1951 he founded the Movimento d'Arte Nucleare (the Nuclear Art Movement, or Art for the Nuclear Age) with Sergio Dangelo whose manifesto stated that its members "desire to demolish all the 'isms' of painting that inevitably lapses into academicism, whatever their origins may be". Baj took inspiration from the most radical notion of Surrealism (he joined the COBRA Group in the last 1940's), adhered to Ubu's sardonic and rocambolesque spirit and Andre Breton (in Le Surrealisme et la peinture) claimed him for his movement. His work was acclaimed by Gillo Dorfles as kitsch pioneer and embraced by artists like Asger Jorn, Marcel Duchamp and Max Ernst. BajÕs work reflected a necessity for continuous re-evaluation and renovation in which the experimental process took precedent over the realized objects.

The exhibition features works from various moments in Baj's output, spanning the late 1950's to 2002, including his Modificazioni paintings (1959-60), a visual farce in which Baj modified kitschy commercial paintings in order to push further still the Dada anti-art idea, and his Idraulica series (2002) consisting of sculptures and assemblages made from hydraulic plumbing fittings.

Also on view Baj's Generali, gorilla-like figures with ferocious expressions, laid down upon a floral fabric background, whose effeminacy clashes with the general's predatory qualities, making them even more absurd and demonstrating both the comedy and the tragedy of the frail human ego as it searches for validation and self-worth. A series of his portraits, assemblages in which Baj address the absurdity of human self-perception and a critic to the provincialism of the Italian bourgeoisie will also be exhibited.