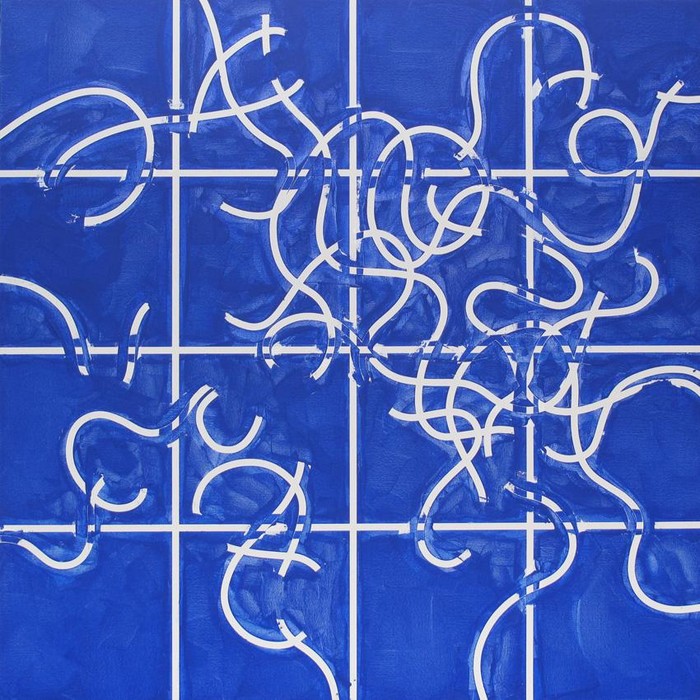 Friedrich Petzel Gallery is pleased to announce its second solo exhibition of works by the Austrian artist Heimo Zobernig.

Since the early 1980’s, Heimo Zobernig has mined various art historical moments and movements, specifically Modernism, post-Modernism, Geometric Abstraction and Minimalism, with a rigorous and interrogatory spirit. His often playful approach also includes a keen and abiding affinity with modes of display, set design and theatricality. For this exhibition, Zobernig will present new grid and monochrome paintings and two new sculptures. The new monochrome works will consist of his signature use of chroma key blue, a blue that also references International Yves Klein blue and its subsequent associations with performance, a key element in Zobernig’s practice as well. The new sculptures, made with base materials such as plaster, particleboard, wood and Plexiglas mirror, suggest a precarious object-hood, or arguably an undefinable existence. The curator Martin Clark refers to Zobernig’s sculptures as “prop-like... They operate in and on the world as active, restless, and undecidable objects.” Zobernig seems to deliberately keep his approach to art- and exhibition-making in a constant state of destabilization, perpetually questioning its very nature.

In conjunction with the exhibition, the gallery is pleased to announce that the curator David Pestorius will conduct a short presentation of Zobernig’s work on Saturday, February 19th, at 2:00 PM. The lecture is free and open to the public. Pestorius’s talk will track the evolution of Heimo Zobernig's diamond grid paintings, a series commenced in mid-2004, which today has a strong presence in the artist's wide-ranging oeuvre. In reflecting upon the relationship of this series to Mondrian's early lozenge grids and late New York City paintings, but also to the 'updating' of these works in the mid-1960s by Ian Burn and Blinky Palermo, respectively, the curator will point out how aspects of finish emerge strongly. At once a metaphor for the shift from early to late modernist pictorial strategies and associated activation of the viewer that Burn saw prefigured in Mondrian, Pestorius will demonstrate how Zobernig's playful approach to finish echoes a caution against an increasingly academic and technocratic modernism, something that Palermo can also be seen to have extrapolated from the work of the Dutch master. David Pestorius is a gallerist and curator based in Brisbane, Australia.

Heimo Zobernig (born 1958, Mauthen, Austria) has had numerous international solo exhibitions. His current exhibition “Ohne Titel (in Red)” opened on January 15th at the Kunsthalle Zürich and remains on view until March 20, 2011. In 2008 and 2009, Zobernig presented a collaborative, overlapping exhibition between The Tate St. Ives, Cornwall, and the Calouste Gulbenkian Foundation Modern Art Centre, Lisbon, in which the he displayed his works in conjunction with works taken from both institution’s collections. He has also had solo exhibitions at the CAPC- musée d’art contemporain, Bordeaux, the Galleria Civica Modena, and the Kuntstverein Braunschweig, among others. In 2010, he won the Frederick Kiesler Prize for Art and Architecture in Vienna. His lives and works in Vienna.
www.petzel.com