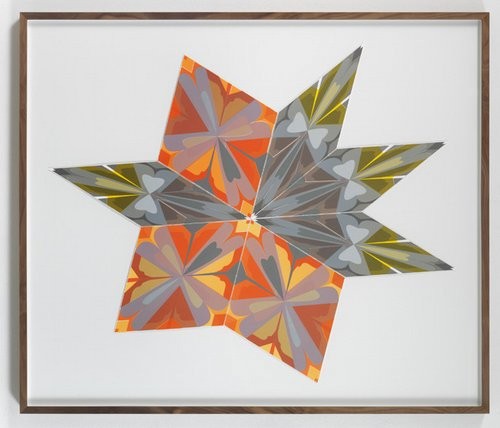 This summer Friedrich Petzel Gallery will exhibit a set of prints made in collaboration with Jorge Pardo, shown for the first time since it debuted in the Guggenheim's exhibition "theanyspacewhatever". In the original museum exhibition, Pardo transformed a section of the museum's infamous ramp with an interlocking system of intricately-patterned screens that were illuminated by anthropomorphic sculptural lamps. This installation blocked and then demarcated an alternative circulation route for visitors while it also functioned as an inventive display system for a series of silk-screened prints created by the artists in the exhibition.

For this project, Jorge Pardo Sculpture Inc. (Pardo's Los Angeles studio) was essentially transformed into a working print shop, producing the prints on a press run by master printer Christian Zickler. As in other projects, Pardo expands upon the possibilities of the artist's production and the limitless capabilities of the artist's studio. Pardo's open call to the artists participating in the exhibition - Angela Bulloch, Liam Gillick, Dominique Gonzalez-Foerster, Carsten Höller, Pierre Huyghe, Douglas Gordon, Philippe Parreno, and Rirkrit Tiravanija – were bound without parameters. What was sent to the Pardo studio was printed and in turn created equanimity between the set's divergent images and concepts. The silk-screened works on paper highlight the individual sensibilities and strategies of a group of artists who are often gathered under the term "relational aesthetics," coined by French curator and critic Nicolas Bourriaud in the mid-1990s. Jorge Pardo Ink revisits Bourriaud's neologistic grouping and lauds the distinct aesthetic and conceptual differences between them.
www.petzel.com