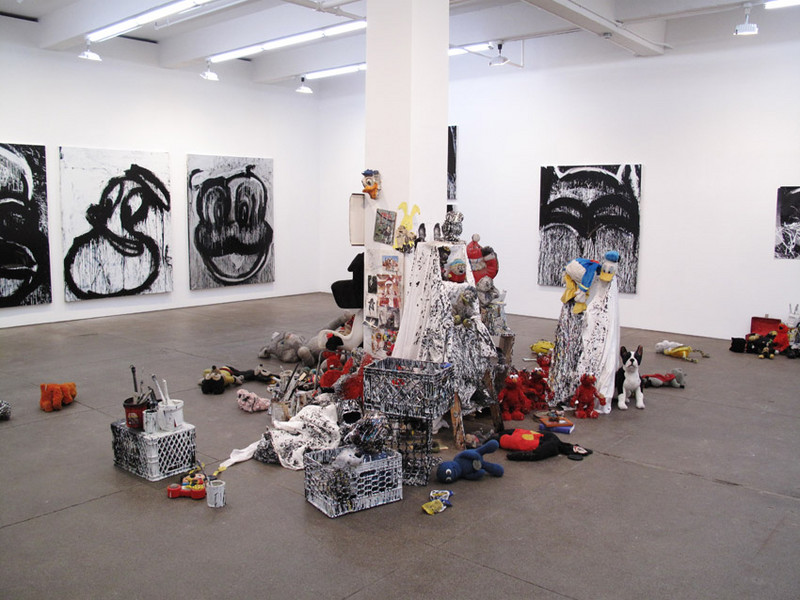 Friedrich Petzel Gallery is pleased to announce “Batman Returns,” the third exhibition of new work by the New York-based artist Joyce Pensato. An illustrated catalogue, published by 38th Street Publishers with an accompanying essay by Ira G. Wool, will be available on the occasion of the exhibition. The book commemorates the 32 years that the artist worked in her Olive Street studio in East Williamsburg, Brooklyn, before re-locating to a new space in the spring of 2011.

For this exhibition, Joyce Pensato uses Batman as the predominant subject and inspiration for her paintings. “Batman” is a motif that first appeared in Pensato’s drawings as early as the mid-1970’s and has been used by the artist only periodically since, the last Batman painting, as singular work, having been executed in 1996. Pensato’s resurrection of this iconic image sixteen years later marks an additional shift in her practice as it will be the first time that she has added various colors to what until now has been a strictly black, white and silver painting palette. Pastel color has played a role in Pensato’s drawings over the years, but color in the paintings is new, and as with her drawings, the color element marks a layer within, simultaneously erased and darkened by the profuse and continual saturation of black and white enamel.

Alongside Pensato’s Batman motif will be paintings and drawings incorporating her familiar cartoon imagery of clowns, Homer Simpson, Groucho Marx, Mickey Mouse, and a character the artist refers to as “The Juicer.” Furthermore, she will present assemblages of toys, ephemera, and stuffed animals throughout the gallery and will show as well approximately fifteen to twenty photographs of striking tableaux of the aforementioned elements taken by the artist at various times of day and night in her former studio. Through these old and new mediums, Pensato continues her baleful transmutation of American cartoon culture - employing her fast, assured, and gestural hand to shed light on the arguable darkness lurking within our familiar Pop iconography. What lay beneath Batman’s mask was, perhaps only for a moment, Bruce Wayne.