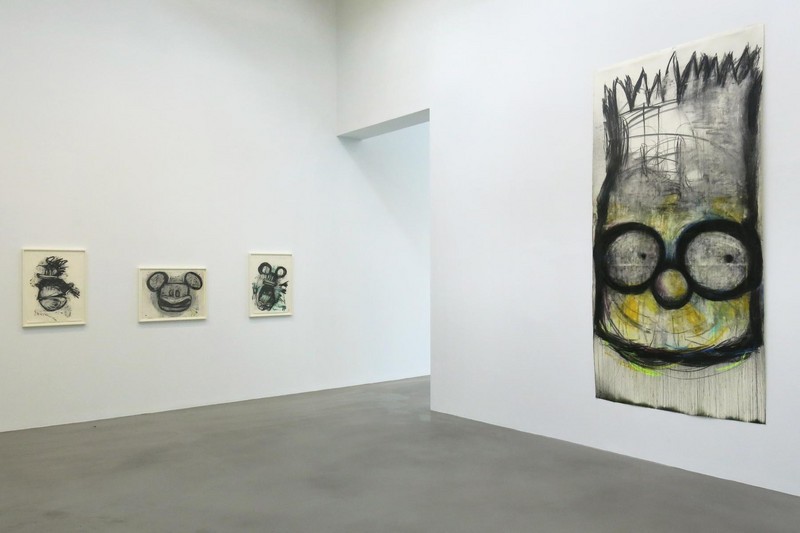 For this exhibition, Pensato will present a new series of paintings and drawings, as well as premiere digital c-prints of her studio taken by the artist and predominantly comprised of collages on her studio walls.

The paintings and drawings will reprise her cast of familiar cartoon and comic book characters, including Batman, Donald Duck, Mickey Mouse, and Homer Simpson, among others. In the new paintings we see her continued exploration of sporadic leaps into color, especially gold and copper, which represent a departure from what has historically been a strictly black and white painting palette. Whereas colorful pastels have surfaced in Pensato’s charcoal drawings over the years, the introduction of color in her paintings is a more recent development and denotes an additional layer within, simultaneously erased and darkened by the profuse and continual saturation of the canvas.

The digital c-prints, exhibited for the very first time to the public, are of the artist’s Brooklyn studio walls, showing juxtapositions of collages that inform her practice and surround her daily working conditions. Historically, Pensato has imported these various collages and other ephemera – figurines and stuffed animals – into the gallery space to an assemblage effect. However on this occasion these objects will be left behind, allowing the photographs to occupy the same two-dimensional spaces of those of her paintings and drawings. Through these old and new mediums, Pensato continues her baleful transmutation of American cartoon culture – employing her fast, assured, and gestural hand to shed light on the arguable darkness lurking within our familiar Pop iconography.

Joyce Pensato was born in Brooklyn, New York, where she continues to live and work. Her touring solo show, I Killed Kenny, was first shown at the Santa Monica Museum of Art (2013) and then traveled to the Contemporary Art Museum of St Louis (2014). Recent group exhibitions include Empire State, curated by Alex Gartenfeld and Sir Norman Rosenthal, at the Palazzo delle Esposizioni, Rome (2013); Interior Visions: Selections from the Collection by Alex Katz at the Colby College Museum of Art, Waterville (2012); and A Painting Show at The Speed Museum of Art, Louisville (2011). Pensato’s work is in the permanent collections of the Museum of Modern Art, New York; SFMoMA, San Francisco; the Hammer Museum, Los Angeles; the Dallas Museum of Art; St Louis Art Museum and the FRAC des Pays de la Loire. She has won numerous awards including the Robert de Niro, Sr. Prize (2013), the Award of Merit Medal for Painting, given by the American Academy of Arts and Letters (2012), the Pollock-Krasner Foundation Award (1997) and the Guggenheim Fellowship (1996).
www.petzel.com