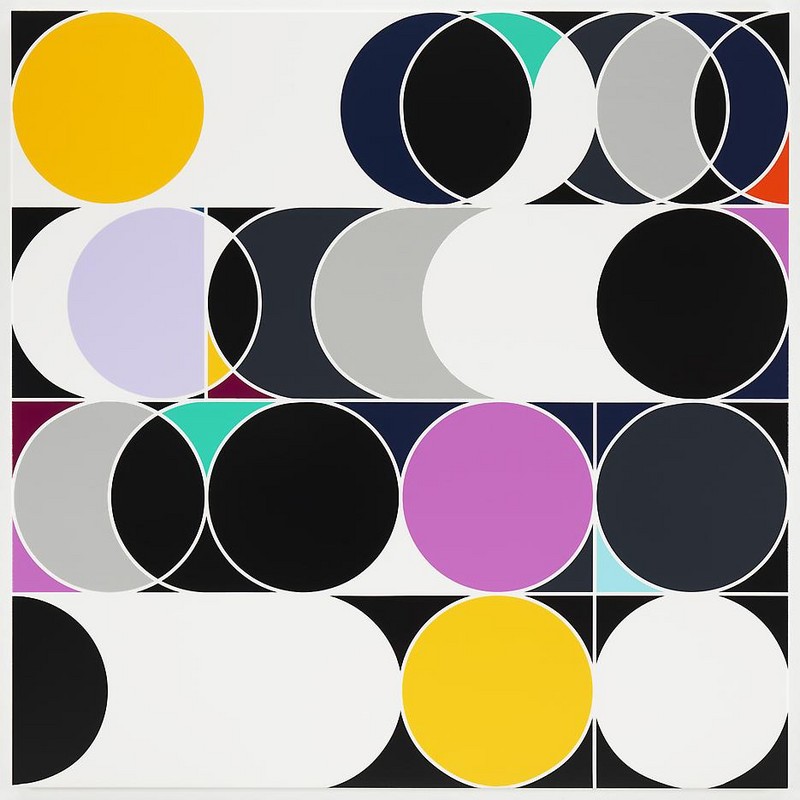 Petzel Gallery is pleased to present an exhibition of new paintings and a film by Sarah Morris. Titled after the military academy of Rio, which is located at the base of the infamous and cinematic Sugarloaf, the title encapsulates the contradictory political history of Brazil and its system of power which is currently going through a moment of rapid development and change. Morris’ approach to producing work is iconic, systematic yet always open, dynamic, and unresolved. Morris describes her paintings and filmmaking – parallel activities within her practice – as a way of investigating, tracing, and playing with urban, social, and bureaucratic typologies. In “Rio” (2012), her eleventh film, Morris depicts the multifarious and complex layers of one of the most contradictory of cities, from its highly orchestrated and eroticized surface image, to the infinite realities of its vast urban sprawl, to the industrial production and the minutiae of its day-to- day living. Morris’ camera wanders flaneur-like through Rio’s Ipanema Beach, hospitals, iconic modernist architecture, football stadiums, factories and favelas, the office of architect Oscar Niemeyer just prior to his death, the headquarters’ of the Mayor of Rio, Eduardo Paes, the infamous Carnival and its ‘Winner’s Parade’, the legendary ‘City of God’ neighborhood, as well as the inside of the Brahma beer factory. In doing so “Rio” focuses on the city’s architecture and, in particular, on the way that it engineers social interaction and plays a key role in Brazil’s outward-facing identity. With images that alternate between the micro and macro, day and night, Morris’ film creates a hallucinatory space that explores the psychology of this city at a particular moment in its history, and traces how this is embedded in Rio’s behavior, signs, surfaces, and its complex recent past.
In the new series of ‘Rio’ paintings, Morris both expands and reduces her abstract compositions, or what the artist refers to as ‘diagrams’, utilizing dynamic new forms and colors that act like collective after-images or codes. Drawing inspiration from a wide range of sources – the work of Roberto Burle Marx, Lina Bo Bardi, Oscar Niemeyer, J. G. Ballard, Joan Didion, lunar cycles, pharmaceutical packaging, textbooks on fruit, Bossa Nova album covers, and birdcages – her canvases are made up of vivid compositions whose erotic curves, vectors and interlocking spheres reference a way of perception as well as the sharp contrasts of Rio’s many social forms. Morris, known for her distinct use of color, has always employed a unique palette drawn from social forms. Her paintings streamline and create a new language of place and politics.
Morris has had numerous international solo exhibitions including Kunsthalle Bremen (2013); Musée National Fernand Leger, Biot (2012); Musuem für Moderne Kunst, Frankfurt am Main (2009); Museo d'Arte Moderna di Bologna (2009); Lenbachaus, Munich (2008); Fondation Beyeler, Rienhen/Basel (2008); Museum Boijmans van Beuningen, Rotterdam (2006); Kestner Gesellschaft, Hannover (2005); Palais de Tokyo, Paris (2005); Moderna Museet, Stockholm (2005); Kunstforeningen, Copenhagen (2004); Hamburger Bahnhof – Museum für Gegenwart, Berlin (2001); Kunsthalle Zürich (2000); and the Museum of Modern Art, Oxford (1999).
Morris currently lives and works in New York and London.
Petzel Gallery is located at 456 West 18th Street New York, NY 10011. Gallery hours are Tuesday through Saturday from 10:00 AM – 6:00 PM. For press inquiries, please contact Andrew Black at andrew@petzel.com, or call (212) 680-9467.
www.petzel.com