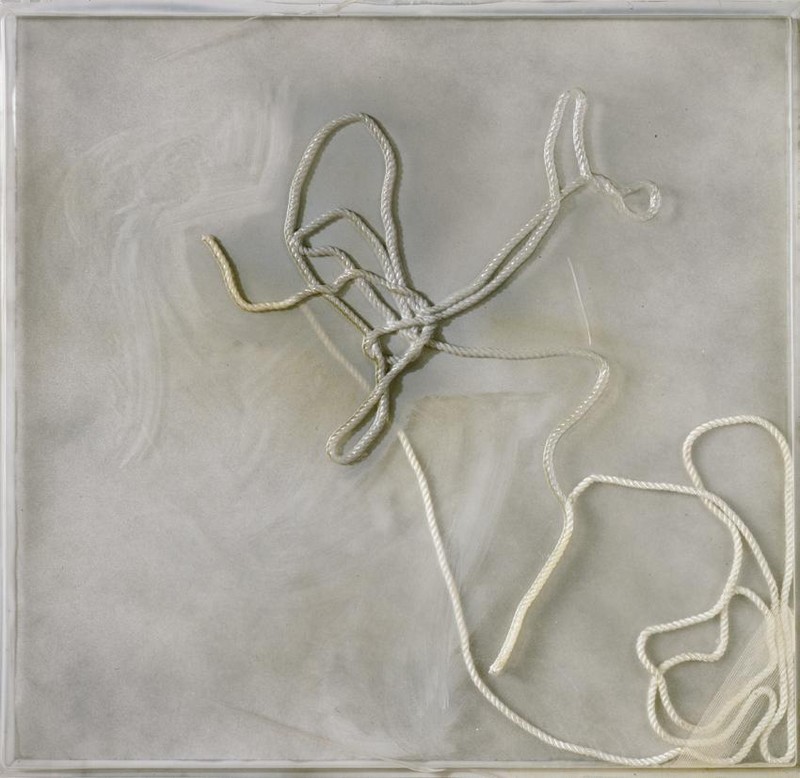 Seth Price presents a show of new paintings. In various media. Portraits of envelopes and letter paper. What is this, the new paper culture? Another breast beater about how “we” are becoming disconnected and solipsistic, thanks to our hyperspeed digital blah-blah? So it’s a return to snail mail.
And we’re getting into stationery. Maybe you could work in a play on “stationary.” Or just, “Paper Trail: Seth Price at Petzel Gallery.”
Because these Photoshop layers are real world status, fuck digie. We got back-of-the-envelope sketches, designers’ tipsy doodles, scrawls on 1970s cocktail napkins. All that, writ large. “Back of The Envelope: Seth Price at Petzel.” But see, that’s just taste. Like people who say: “Look, put it this way: I’d rather work out drunk than hung over.” You’re a bubble bath, box of chocolates, and Chardonnay type gal; I’m a guy who likes to get home and kick back, uncork a nice red, feet up, Bach deedle-dee-deeing, mushrooms bubbling in cream sauce. “Pushing The Envelope: Seth Price at Petzel.”
Like people who still grate their parmesan fine instead of roughing it into irregular scree, which gives a dish some tooth. We like heterogeneous crude, not silk-milled slick. Get with it. Same for sea salt, incidentally: “Don't muff the rough stuff.” Definitely something here about eating and drinking. All packaged-up though, which, now, that shit really got started back in the ‘80s with Yoplait, Capri Sun, and Fruit Roll-Ups—“I’m Going to the Post Orifice: Seth Price”—and weird packaged sweets, Japanese mouth-melters in inscrutable wrappers, we don’t entirely get it but we admire the wrap, we understand processed product, the way bacon’s a pork product and plywood’s a wood product. PShop IRL, don’t mess. Like stupid designers who forget that their shining, lapidary screen images will end up on dull paper, poorly printed, logos intruding.
Because it’s underwritten, of course. Spoken for. Might have called this show “Underwriters.” The power of the purse. Which only means the evolution of the fashion industry to the point where it’s all about bags. “Whatever else you’re turning out next season? Make sure we got some new shit for stowing our old shit.” Garment bag, sleeping bag, body bag, shit. Sport it, flaunt it, slip it on, slip it in. Cinch and line, zips and bucks, loop de loop. Insides and outsides. Doing the whole “inside/outside” riff, but dead bang flat. Like people who think Helmut Lang pioneered special rinses, when point of fact native son Ralph Lauren done it in the early ‘90s, those antique industrial washers he stumbled on down South, the Carolinas or something. And he was just catching a ride on some slipshod denim folkway. Fashion is underwritten by bad behavior.
To be soft yet hard: what fulfills this mandate? In fact, a turd. Which is precisely how some see folk art: a soft transmission, hardly received. “Partial Post: Seth P.” Like people who “watch every penny,” because why, because they’re afraid it’s going to kill them? And lord, what about that title.
Folkloreus is what, a Roman deity? Lord of the Underwriters. “What lies beneath.” Some old bread crust with a beard, dropping folksy quips: “Look bad and stupid, inevitably you will appear interesting, even fashionable.” God of the sly and apt. “US Letter Format: Seth Price.” Who said that? Just folks!
www.petzel.com