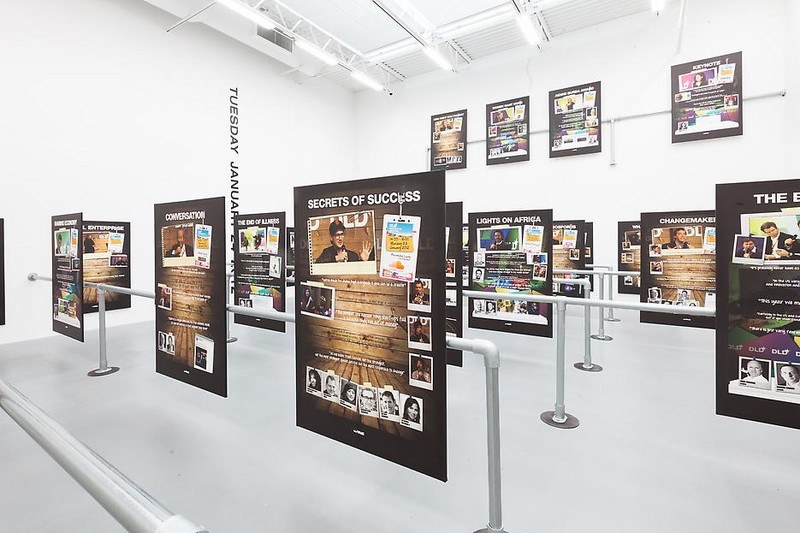 Petzel Gallery is pleased to announce an exhibition by Simon Denny entitled, All you need is data: the DLD 2012 Conference REDUX rerun, from June 20 to July 26, 2013. This is the artist’s second exhibition with the gallery. A catalogue published by Koenig, including an interview with Hans Ulrich Obrist, texts by Karen Archey, digital law expert Michael Littger and an introduction by co-curators Bart van der Heide and Saim Demircan, will accompany the show.

All you need is data: the DLD 2012 Conference REDUX rerun focuses on the 2012 edition of Munich’s annual Digital Life Design (DLD) conference http://dld-conference.com/. The conference is a high caliber platform for the exchange of ideas between digital media, the sciences and culture, which had the theme “All You Need Is ... DATA?” in 2012. Denny’s exhibition was first presented at the Kunstverein Munich at the beginning of the year, alongside the 2013 DLD conference.

For his exhibition, Denny has created a display structure for 89 canvases that represent a visual summary of events that took place at DLD12, harvesting insights from the many speakers such as Jack Dorsey (Twitter), Jimmy Wales (Wikipedia), Sheryl Sandberg (Facebook), Chris “Moot” Poole (4chan) and David Karp (tumblr), among others. The viewer is lead through the exhibition following a railing system that displays individual canvas “screens” that feature photos, pull-quotes and reconfigured stage and graphic designs from the conference. This content is flattened and depicted using iOS “skeuomorphic” style with app-like components. Only print media is used to illustrate the entire high-tech conference chronologically from beginning to end, forming what critic Kevin McGarry has described as “a structuralist memento mori”.
Simon Denny explores the materialization and commodification of “future visions and experiences,” and the lifespan of information in the context of fast paced, tech-driven commerce. The exhibition is a revealing format for how predetermined futures are promoted from the perspective of the digital economy. As such, the ‘REDUX’ in the title suggests a revisit of these future forecasts and is also indicative of the ‘Director’s Cut’ or a re-edit as a means of artistic appropriation.
Simon Denny was born in New Zealand in 1982 and received his degree at the Städelschule, Staatliche Hochschule für Bildende Künste in Frankfurt. He has had numerous solo exhibitions, with shows at the Aspen Art Museum and Kunstverein Munich in the past year. He will be included in this year’s Venice Biennial as well as have an exhibition at MuMOK, Vienna this summer as a winner of the Art Basel Statements Baloise Preis in 2012. He is also a nominee for this year’s German Nationalgalerie Preis at the Hamburger Bahnhof in Berlin. Simon Denny lives and works in Berlin.
www.petzel.com