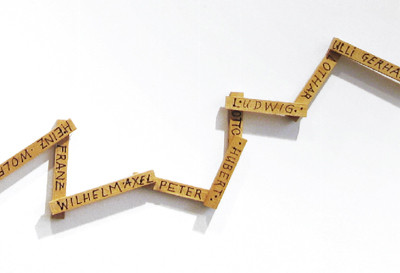 If the lath is the fundamental building block of construction, then it can be argued that prior to its employ, the lath holds no purpose, memory, history or meaning. It is a dull, stupid material unburdened of any significance or association, save for what it can be. Its potentiality, or the ability to convey a structure or an idea, makes it the exact opposite of the zero point-a point of possibility rather than an end.

The artists in this exhibition share an interest in "low" materials like the lath. Although their usage of these materials comes from varying conceptual and aesthetic premises, each is actively engaged in a discourse of employing a material devoid of expectation (or a facsimile of this material), often peppering this engagement with a sense of the absurd. In many ways the artists gathered together in this exhibition share in the exploration of a similar paradox of operating with everyday, fundamental materials: the urge to produce something and nothing, or perhaps more accurately, something from nothing. "The Lath Picture Show" aims to bring together a group of artists who invest their ideas in low materials in an effort at greater meaning, even arguably transcendence. Like Lucy in The Lion, the Witch and the Wardrobe, these are artists who ask the viewer to see the wardrobe not for the wardrobe itself but for its possibilities, for the world that may lie within it.
www.petzel.com