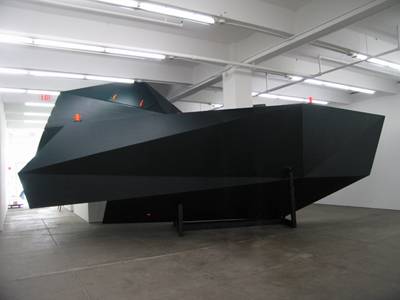 Friedrich Petzel Gallery is pleased to announce a solo exhibition by renowned German artist Tobias Rehberger. The exhibition will feature one large work: a solitary boat sculpture, constructed in Germany and disassembled and shipped in parts to New York.

Rehberger's work raises the question of authorship and reception by putting the production process in the hands of others and thereby triggering and in a way relying on a misinterpretation of the underlying ideas. In one of his past projects he made drawings of brand name cars, sent them to Thailand without further instructions and had the producers interpret the sketches. The results were cars with the instantly recognizable features of the original brands but showing flaws that revealed the sculptures as copies.

In the "American Traitor Bitch" exhibition, Rehberger collaborates with Danish-Vietnamese artist Danh Vo. Rehberger extends his method by allowing Vo to step in not on the production level but on the conceptual level, thereby pushing the limits of his strategies. Danh Vo's father's unique story of survival after the Vietnam War serves as inspiration for the entire project. Rehberger used Danh Vo's ideas and recollections of his father's story, while Vo stayed true to Rehberger's distinctive style, making the final creation a result of their different views and interpretations.

After the fall of Saigon, over 20,000 Vietnamese citizens were evacuated to an island called Phu Qouc, where they lived under horrendous post war conditions. After four years, the Vo family decided to risk their lives and escape by building a massive vessel that could carry over 100 refugees away from Vietnam and, ideally, to America. During that time, however, building a boat was an incredible task. Vo's father had to find a way to cover production costs, find materials, create the design and bribe local officials so they would look the other way as the refugees escaped.

After much hard work, Votrunk's father built his boat and the refugees were able to sail out to sea. Their voyage, however, was interrupted by a large tanker headed for Denmark, which forced their boat to anchor on the shores there. The Votrunk family has been living in Copenhagen ever since.

The parallels between the personal history of Danh Votrunk's family and Tobias Rehberger's strategies form the foundation of this collaboration. In an earlier work, Rehberger reproduced the "Sunday Painting" of his father as well as the furniture that his father had personally designed and built for the family's home. In showing the similarities between Votrunk's and Rehberger's fathers as producers, the work also illustrates the enormous discrepancy between each family's geo-political situations.

This will be Tobias Rehberger's third solo exhibition at Friedrich Petzel Gallery. The exhibition will open March 25th, with a reception from 6 - 8 p.m. and will be on view through April 22. Friedrich Petzel Gallery is located at 537 West 22nd Street, New York, NY 10011. For further information, please contact the gallery at 212-680-9467 or info@petzel.com.
www.petzel.com