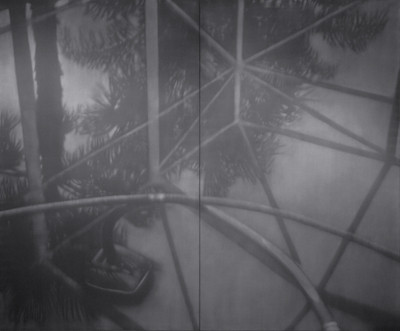 If we could hear down there, maybe it would be a soft whirring sound. We stare into the pool at the little machine trolling, the reflections on the surface catch our attention, the things dancing on the plane that separates it down there and me right here, on the edge, in limbo, in Florida, in love with what my friend calls 'replaceable parts, one in a million'. Lounge chairs. Animal figurines. And the palms, and the sky, and all the air and space above that, behind them, back there and back then. They reverberate back from the view into Flatland, the place with no space at all, softly whirring. In Zurich, they sleep standing up in electric blue light, waiting for the kiss of cotton and steam. A torture chamber for wears to make men feel rich and the women debonair. This is the upside of business as usual, at midnight, behind the windowpane where breath makes the fog. This could be golf on the moon, where the only evidence of intelligent life is in the chemistry that made the sand green, the cave paintings in the bathroom, and the mausoleum across from hole number six. In the Yucatan there are ruins of successful civilization. And for the new ambassadors of perfection a landscape of prepositions- before, between, among, around, within, behind another wall of glass, a shrouded tent breeding ground for the best in the species. They appreciate our sponsorship, it makes them near free.
EMS

Friedrich Petzel Gallery is pleased to present the second solo exhibition of new work by Troy Brauntuch. The show will feature seven works on cotton and a selection of color photographs. This exhibition continues Brauntuch's investigation into public and private imagery. The artist depicts, for example, the interior of a European dry cleaner or the view inside of a butterfly pavilion with the same cool detachment he employs when picturing the back of his girlfriend's new coat. Drawing white-into-black conte crayon onto the surface of a cotton canvas, the artist produces various kinds of interruptions through this pigmentation between images and their presumed meanings. At first glance, it takes a moment for the viewer's eyes to acclimate and recognize, if at all, these various images or, in other cases, to penetrate the sheer ordinariness of the images depicted. Explanation of what one is seeing is given by the artist through the use of parentheses in his titles, as in Untitled (Butterfly Pavilion). This use of the parenthetical also hints at the process that the artist employs of existing in the interstice between formal abstraction and the concrete image.
A member of the so-called Pictures Generation, Troy Brauntuch first exhibited with such contemporaries as Jack Goldstein, Robert Longo, Philip Smith and Sherrie Levine in the early 1980s, pivoting in the "Pictures" exhibition at Artists Space in 1977. The work of Troy Brauntuch is in many prominent public collections including the Metropolitan Museum of Art, New York and the Museum of Modern Art, New York. His work was included in the 2006 Whitney Biennial and he recently had a solo exhibition at Magasin - Centre National d'Art Contemporain in Grenoble.
A comprehensive monograph spanning 30 years of the artist's career with essays by Johanna Burton and Douglas Eklund will be published by JRP/Ringier this fall. The exhibition at Friedrich Petzel Gallery will open on April 18, with an opening reception from 6-8 pm, and will be on view through May 17, 2008. For more information, please contact the gallery at 212.680.9467 or info@petzel.com. Friedrich Petzel Gallery is located at 537 West 22nd Street, New York, NY 10011.
www.petzel.com