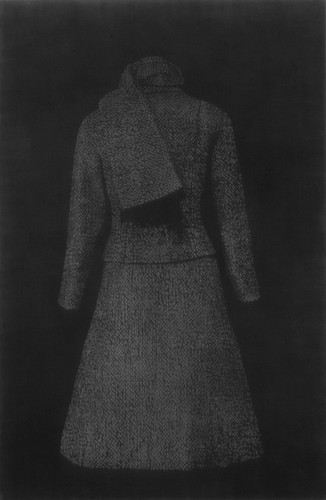 "Over the years, Brauntuch has presented so many moments: big and small; his own and the world's. A dead pit bull on the sidewalk, shot after an attack, the fur on the top of its head soft, vulnerable. The Pan-Am disaster in 1990. The Long Island Rail Road Shooting in 1993. Sarajevo. Empty shoes. His wife, in 1984, sleeping. A dry-cleaning shop window. A handprint. If the list seems incongruous, some elements of it less easy to figure with precision than others, there is nonetheless an uneasy alliance between them, a palpable resonance that has to do as much with what's not being shown as what is offered to the eye."

-Johanna Burton, Familiars: On the Work of Troy Brauntuch

Some images formerly existed only as the foundational sources for early photographic works and canvases. Others have never been put forward and combine to form uncanny relationships, not unlike the space between recognition and knowing presented in Brauntuch's canvases. Subjective notes describe things actually made as well as unrealized objects. A collection of handmade rubber stamps in various forms of use are presented, imbued with a range of pictures - from the public, appropriated, history laden, to the private, idiosyncratic and sentimental. A suite of new canvases plays off these temporal shifts with light on their inert subject.

The work of Troy Brauntuch is in many prominent public collections including the Metropolitan Museum of Art, New York and the Museum of Modern Art, New York. His work was included in the 2006 Whitney Biennial and he was part of the recent exhibition "The Pictures Generation" at the Metropolitan Museum of Art in New York. A comprehensive monograph spanning 30 years of the artist's career with essays by Johanna Burton and Douglas Eklund will be published by JRP/Ringier for this occasion.