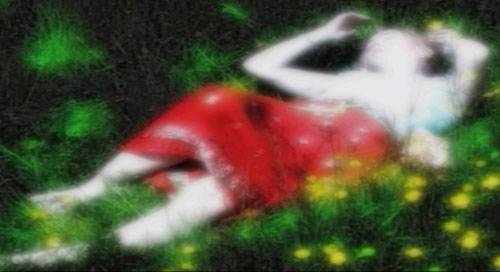 Frith Street Gallery is pleased to present an exhibition of new photographs and videos by Swiss artist Annelies Strba. Strba's work is often concerned with notions of time and history; subjects which she expresses in a metaphorical and highly personal way. Her work is sometimes romantic, sometimes disarmingly frank. It encompasses a diverse range of subjects, from the intimacies of the artist's own family life to dreamlike tours of the great cities of the world.

Since 1997, Strba's preferred medium has been digital video. Her films are often highly manipulated; their intense colour and slowed sense of time has an almost hallucinatory effect on the viewer. The hazy outlines of solid forms melting into the immateriality of light and shadow create a form of 'digital impressionism'. This play on one of the most significant developments in art history is seen even more clearly in the film stills printed on canvas.

Frances and the Elves is the artist's latest video work - the title refers to the case of the Cottingley Fairies in which two young girls in Edwardian England hoaxed the appearance of fairies at the bottom of their garden in north Yorkshire. Using photographs and letters to each other, Frances and Elsie Wright convinced society of the existence of the tiny beings. It was not until fifty years later that their photographs were exposed as skilfully made photomontages.

Strba's film features mysterious beings (played by her daughters) existing in a world of light and shadow. This fantastical place is infused with sumptuous artificial colours creating a strange and other-worldly atmosphere.


Annelies Strba was born in Zug, Switzerland in 1947. Her solo exhibitions include: Gemeenten Museum, The Hague (2004), Helmhaus, Zurich (2003) and Kunsthaus Zug (2001). Her work has been included in numerous group exhibitions most notably: the Sydney Biennial (1992), The Epic and the Everyday, Hayward Gallery, London (1994) and the Liverpool Biennial (1999). Annelies Strba lives and works in Melide and Richterswill, Switzerland.