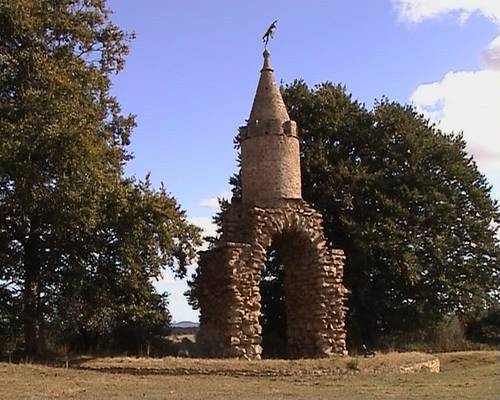 This exhibition is about places, which are real and imaginary, and somewhere in between the two. It brings together a diverse group of artists who have made work inspired by idiosyncratic, eccentric, outrageous or simply odd architecture and the effects it creates.

Kenneth Anger's Eaux D'Artifice (1953) is perhaps the most abstract of all of Anger's film works. Where the rushing, flowing, trickling waters of the fountains of the Tivoli Gardens become interesting as shapes and rhythms. We follow a strange creature dressed in the style of an 18th Century courtesan through a dark labyrinth of cascades, balustrades, grottoes and fountains, she tries to lure out the monsters with her fan - to invoke the water gods. But being weak and frivolous she fails, and melts into the waters.

Edwina Ashton's drawings and paintings inspired by a huge variety of subjects: out-dated walking guides to the Alps, books on pet care, Renaissance paintings, images drawn from memory or coaxed from the particular shape of a tea stain on a left-over scrap of card. Ashton's choice of subject matter displays a fascination with a place, which appears decidedly out of step with the present - removed from the vexations of the contemporary urban world but offering just as little solace.

Volker Eichelmann's Follies and Grottoes (2005) is part of an on-going project to record on film all the architectural follies in the UK. Eichelmann's record of these structures places them very much in the present - some remain in splendid parks or great gardens - while others now find themselves stranded on the sides of motorways or in housing developments. The images are often accompanied by the noise of the contemporary world such as airplanes and traffic. It is appropriately ironic that many of these paper-thin structures which were built to resemble the romantic ruins of some imaginary past have, through time and neglect, become actual ruins, themselves on the verge of disintegration.

John Riddy's photographs cover an array of historical moments and references while remaining particularly singular and focused. His works find resonance in renaissance and modernist painting, sculpture, architecture and the specific qualities of various city spaces. Riddy's photographs construct the world as an ensemble of sculptural relations depicting a place, which may only be seen through a lens. In the photographs of Rome such as Rome (Pyramid) and Rome (Argentina), both 1999, Riddy plays with the articulation of space, so the city appears rather like an empty stage-set.

Thomas Schütte once said that the concept of improving the world was interesting to him and his architectural models often seem to propose alternative ways to be, to think or to act. They are difficult to categorise stylistically, touching upon Modernism, Neo-Classicism, Expressionism and often bringing to mind the bizarre cityscapes of Giorgio di Chirico. Some works hint at narrative, some create the miniature sublime from the poorest of materials and through them Schütte takes a skeptical look at the goings on of the world.

Bridget Smith is fascinated by the architecture of pleasure and the intense aesthetic experience of seeing the unreal created in the real environment. She has photographed the interiors of cinemas, the urban landscapes of Las Vegas and the sets built in various low cost glamour studios. Her photograph Grotto (1998) shows the subterranean architectural fantasy created by Ludwig II of Bavaria at the Linderhof Palace - nature recreated with a baroque flourish.

For further information or images please contact Dale McFarland on 020 7494 1550 or dale@frithstreetgallery.com