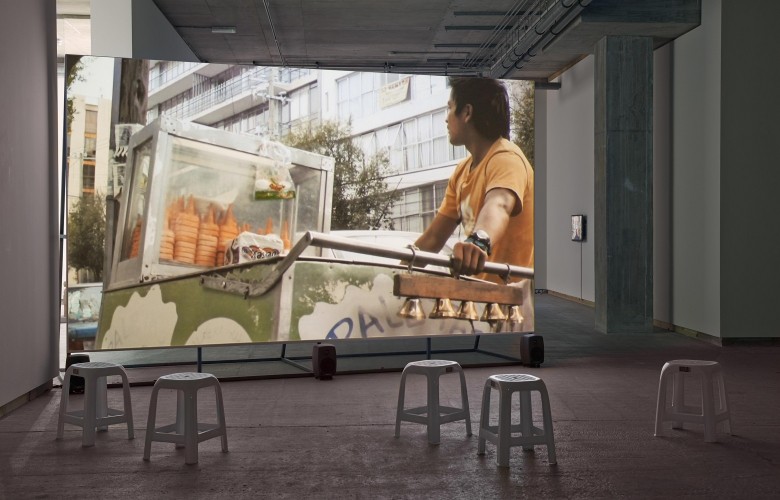 Frith Street Gallery is pleased to announce an exhibition of videos and photographic works by Jaki Irvine.

The new video Se compra: Sin é opens in a small recording studio in Mexico City, pianist, cellist, violinist and singer are tuning up. The streets outside are full of activity. Balloons float, someone hoists a bag up on a rope, rubbish collectors sort through plastics. A young woman sits in the back of a scrap van holding a black umbrella above her head. A girl’s recorded voice crackles out of speakers above her head, the recording familiar on the streets of Mexico City: Se compra colchones, refrigadores, estufas, lavadoras, microondas y algo de fierro viecho que vendan... (We buy sofas, fridges, heaters, washing machines, microwaves and any old metal that you are selling...)

Inside, the piano picks up something of the rhythm and tone of this recording. Cello and violin follow suit. Outside, men call out, selling gas, shouting up from the streets, from closed gates, to windows unseen far above. Finally, in the studio, Irish singer Louise Phelan’s voice can be heard, reaching out, both holding and letting go of its home key. Tones raise and waver, reflecting the sounds and activities of the streets: men call out; knives are sharpened; ice hacked; whistles blown; bells ring; steam gasps and splutters out of makeshift ovens; a girl swirls hula hoops around herself. The chaos and sound of Mexico City. Finally, Sin é: That’s it.

Taking as her starting points the regular passage of a scrap metal van through the streets of Mexico City and traditional Irish Sean-nós * singing, the soundtrack for this work was composed by Jaki Irvine for piano, cello, violin and voice. Over the course of two years, the many hours of footage shot and recorded of street sellers, knife sharpeners, garbage collectors and others trying to make a precarious living were condensed into a multilayered reflection on the strategies we use to hold onto ourselves, and the place of art and music in this process.

Guanajuato 14 was filmed at this address in Mexico City. A man calls impatiently to his children and the rhythm of someone sweeping the streets forms part of the aural texture of this work. The sounds of a language and city form a kind of backdrop as people go about their ordinary lives and a hummingbird moves with its own sense of timing, in its own world.
Shot In Mexico, On the Impossibility of Imagining the Numbers of Dead and Disappeared consists of 20 photographs on a wallpapered background. The images were taken in the mountains outside the town of Angangueo where colonies of monarch butterflies cling to trees in the forests, almost indistinguishable from dead leaves. As the sun comes up, penetrating the forest, their numb bodies begin to stir. Thousands of butterflies fill the air. It is impossible to fully appreciate their numbers and the sheer wonder of such a spectacle. This annual migration takes place in a country where the numbers of victims of atrocities has reached unimaginable proportions. This too, like the butterfly colonies is impossible to grasp, to fully understand the full horror of its depth and scale, in the midst of such beauty.

*The vocal element of this work was developed with Limerick born singer Louise Phelan, who lives and works in Mexico City. Sean-nós is a style of highly ornamented traditional song associated with the west and south of Ireland