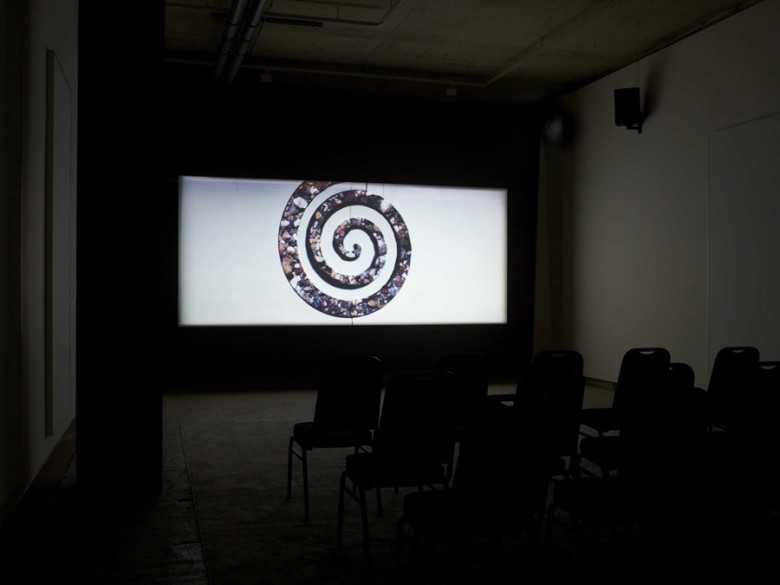 JG is a sequel in technique to FILM, Tacita Dean’s 2011 project for Tate Modern’s Turbine Hall. It is inspired by her correspondence with British author J.G. Ballard (1930-2009) regarding connections between his short story “The Voices of Time” (1960) and Robert Smithson’s iconic earthwork and film Spiral Jetty (both works, 1970). The new 26 1⁄2 minute work is a 35mm anamorphic film shot on location in the saline landscapes of Utah and California using Dean’s recently developed and patented system of aperture gate masking.
JG departs from her previous 16mm films in that it marks a return to voiceover and sets out to respond directly to Ballard’s challenge—posed to her in a letter shortly before he died—that she should seek to solve the mysteries of Smithson’s Spiral Jetty with her film. The connections between Ballard’s short story, which ends with its main character building a mandala in a dried saline landscape and Smithson’s earthwork in the Great Salt Lake, are unequivocal. Dean writes: “ While Smithson’s jetty spiralled downward in the artist’s imagination through layers of sedimentation and prehistory, in ancient repetition of a mythical whirlpool, coiling beneath the surface of the lake to the origins of time in the core of the earth below, the mandala in ‘The Voices of Time’ is its virtual mirror, kaleidoscoping upwards into cosmic integration and the tail end of time.”
Dean’s use of aperture gate masking is a labour-intensive process, analogous to a form of stenciling, which allows her to use different shaped masks to expose and re-expose the negative within a single film frame. This requires running the unexposed film through the camera multiple times, giving each frame the capacity to traverse time and location in ways that parallel the effects of Ballard’s fiction and Smithson’s earthwork and film. Among the masks used in JG is one that references the template and sprocket holes of a strip of 35mm Ektachrome slide film. The accidental black of the unexposed outlines of the other masks—a range of abstract and organic forms that suggest mountain horizons, planets, pools, and Smithson’s Jetty, appear to be traced by hand. A work that could only be made using 35mm film, JG is also about drawing and collage and, as such, strives to return film to the physical, artisanal medium it was at its origin. Made inside the camera entirely while on location, this process serves to restore the spontaneity and invention that distinguished early cinema in comparison to the relative ease and what Dean calls “the end of risk” afforded by digital postproduction.
JG was originally commissioned and shown by Arcadia University Art Gallery, Glenside, PA and was funded by The Pew Center for Arts & Heritage, Philadelphia, USA. It is accompanied by a catalogue and artist book collaboration, ‘Key Stroke’ with writer, Will Self.
c/o Jolyon consists of 100 original postcards of pre-war Kassel in Germany, over-painted in gouache by the artist with contemporary views of the same sites. Originally conceived for exhibition in Afghanistan, they were mailed c/o Jolyon, to the former CEO of the Aga Khan Trust for Culture in Kabul, Jolyon Leslie. The name Jolyon had an immediate resonance for the artist as it was her father’s middle name. He had always been given to understand that he was the first non-fictional person to bear it because of his own father’s close friendship with writer John Galsworthy, who made the name up for his character in The Forsyte Saga.
The first 50 postcards of c/o Jolyon were shown as part of dOCUMENTA (13) at the Queen’s Palace, Bagh-e Babur in Kabul, Afghanistan, June 20 – July 19, 2012. The complete work is being shown here for the first time and is accompanied by the launch of a limited edition book signed and numbered in an edition of 300, published by Walther Koenig Books Ltd.
www.frithstreetgallery.com