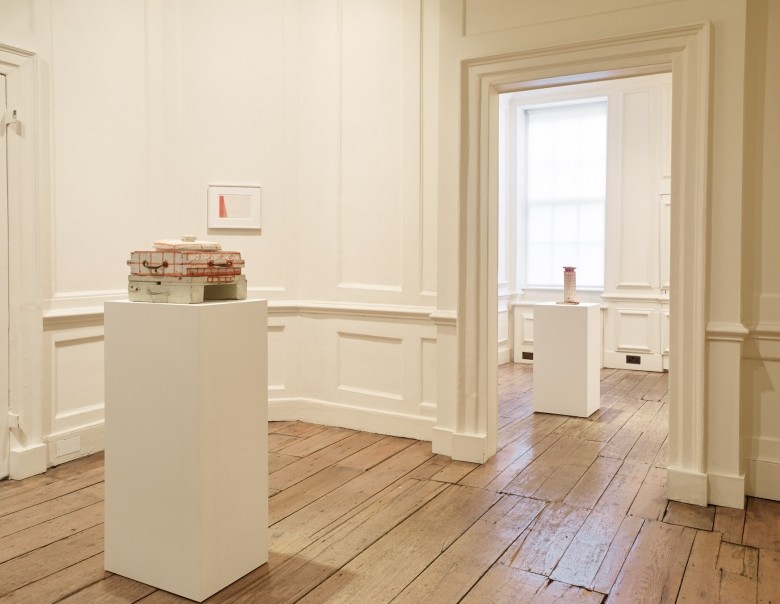 Tell it Slant brings together a selection of works that explore ideas about abstract drawing where line and a sense of structure are fundamental. The artists in the exhibition are from very diverse backgrounds; some work in urban centres while others are from more peripheral places, and although they have a wide variety of concerns drawing is central to their practice. Here, drawing is not only defined as line on paper but also involves a variety of materials, including found objects. A strong sense of integrity to execution and to materiality becomes evident in works that range from the precise and considered to the haphazard and intuitive.

Tell all the truth
but tell it slant

Polly Apfelbaum (1955, US) explores colour both visually and structurally. In recent years she has developed numerous serial works using textiles, ceramics and plasticine, as well as experimenting with drawing on fabric and paper with the aid of different templates or rulers. For her series Basic Divisions (wavy gravies), Apfelbaum used rulers with six different line qualities, from straight edge to wavy, to create vibrational fields of multicoloured repetitive lines. These intuitive, almost psychedelic marker drawings on construction paper are interrupted by the overlay of a more rigid geometry of heavy graphite lines, whose orientation derives from the various international flag divisions.

Zebedee Armstrong (1911-1993, US) lived his entire life in Thomson, Georgia. It was only in his late sixties, following the death of his wife, that Armstrong began fashioning wood constructions and modifying readymade objects into sculptures, to which he would add a coat of white paint before overlaying with an intricate grid of permanent marker lines. He referred to making these webs of lines as “taping with time”.

Massimo Bartolini (1962, IT) has spoken of his aeroplane drawings as being like “technical drawings in reverse”. In each a paper aeroplane is made and then unfolded, and each of the lines, whether purposeful or a resultant flaw, is over-drawn to create a blueprint-like drawing of itself. The result is a two-dimensional work with sculptural qualities, where intention and accident are enhanced in equal measure.

Hector Alonzo Benavides (1952-2002, US) was born in Laredo, Texas. He studied to be an optician and worked for the Catholic Diocese radio station, but by the mid 1980s had abandoned all other pursuits to devote his time to his art. Benavides boasted of his obsessiveness, a characteristic evidenced in his intricate, densely layered drawings that convey different emotional states.

Julius Bockelt (1983, DE) works within the Atelier Goldstein in Frankfurt, a studio founded for artists who, for various reasons, are unable to draw adequate attention to themselves and their work. His small format freehand ink drawings are tightly organised into intersecting linear bands. For Bockelt, the minutiae of life – cloud formations; soap bubbles; everyday sounds – are interpreted as an inner musicality, akin to sound waves with unique rhythms that can be expressed as abstract and minimal patterns.

Louise Bourgeois (1911-2010, FR/US) created her Fabric Drawings late in life, using her own clothes and other domestic effects accrued over decades. These abstract yet acutely personal works retain allusions to the materials’ past incarnations. Fabric played an important role in Bourgeois’ life. She grew up surrounded by the textiles of her parents’ tapestry restoration workshop, and from the age of twelve helped by drawing in the missing parts that were to be repaired. A life-long hoarder of clothes and household items such as tablecloths, napkins and bed linen, in her nineties, with the aid of a seamstress, Bourgeois cut up and re-stitched these, transforming her lived materials into art.

Pip Culbert (1938-2016 UK/ FR) divided her working time between London and a village in the South of France. She has been distinguished for decades by her practice of deconstructing every-day fabric objects and paring them down to their essential seams. This process of reduction re-contextualises the object, be it a flag or, as in the work shown here an awning, into a weightless line drawing, the skeleton of a soft object.

Tess Jaray (1937, UK) was born in Vienna but grew up in rural Worcestershire, where her parents emigrated just after her birth. She studied at the Slade in the late 1950s and began a lifelong pursuit of developing an abstract language that includes influences from Islamic design and classical Italian architecture. A selection of works from 2010 exemplifies her transition from pencil on graph paper to the much quicker use of a computer program and digital printer to make precise but sensuous colour ‘drawings’. These small, one-off experimental works are often sketches for larger paintings.

Joseph Lambert (1950, BE) has spent most of his working life at La Hesse Centre d’ Expression et de Creativite in Vielsalm, Belgium. In the 1990s he developed a unique alphabet, an automatic form of writing represented by coils of alternating colour laid down on paper or cardboard in horizontal striations. For the artist these strata are like knitted words forming long sentences reminiscent of text on a page, but could just as easily refer to geologic layers or even woollen embroidery.

Bob Law (1934-2004, UK), a maverick figure, dropped out of school in his early teens, and apart from apprenticeships and a few night classes had almost no formal art training. Law is now seen as one of the most significant artists in the development of Minimalism in Britain. The paintings of Mark Rothko and Barnett Newman were a particular inspiration to him, as was his exploration of both Eastern and Western philosophy, psychology, palaeontology, poetry and alchemy. The drawings shown here exhibit Law’s, pared-down and systemized use of line and colour.

Sara MacKillop (1973, UK) is interested in the sculptural presence of that which is barely manifest, engaging with work that takes the form of minimal changes to the overlooked or everyday. Her work has been described as “an informal formalism”. She often works with objects that were originally part of analogue communication systems, but that due to technological advancements have slipped from use. Here a record inner-sleeve is shown under a simple found frame communicating a slightly worn minimalist formality, while a circular jigsaw puzzle is inverted and rests awkwardly against the gallery wall.