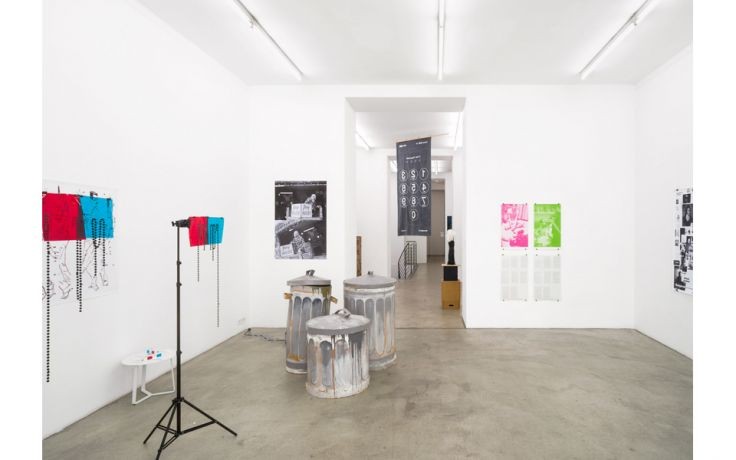 
My Origins? I Made Them Up
On the theme that Diedrich Diederichsen chose for the 2016 edition of curated by_vienna.
A few comments by Cosima von Bonin, organizer of one of the nineteen exhibitions on the topic.

It’s a war zone out there. Everybody has some kind of a history.
Those artists who agreed to take part in the exhibition at Gabriele Senn’s gallery but who do not subscribe to my attempt to explain myself, as outlined below, will unfortunately have to bear with me nevertheless. I would ask them to follow my advice and adhere to Diedrich Diederichsen’s choice of theme for this year’s edition of curated by_vienna [My Origins? I Made Them Up] and his text about that topic3, and to excuse me for this press release.

For me, Diederichsen’s text on the topic is enviably perfect and for that reason it cannot be topped. Because it covers everything. Which is why I am—as so often—taking the relatively easy way out to justify my selection of works.

When the organizers quite reasonably requested that I, as curator, hand in a concept of my project, alarm bells immediately started ringing inside my head. Curator, concept, project. For me, all of those three words belong to the art war zone, in a war that was raging out there, which I had deserted some time ago and had since been hiding from under my grandparents’ kitchen table4. It does not matter whether granny and granddad are adopted, radical and intrepid, genuine or simply a pack of lies: I can no longer be bothered and also have no possibility to deal with the best liars in the art world, one of the countless worlds.

I would prefer to boast about the artists who will be on show at Gabi Senn’s gallery rather than about their works. Some of those who are taking part in the exhibition I have put together, will be present at the gallery on 8th September. Unless they escape. However, you are welcome to speak to those who manage to see the opening through to bravely champion Enough Romance. Let’s Fuck5. Let’s see whether and how they respond.

1 Changed by CvB.
2 Signed LP cover.
3 Strangely only available online on the Vienna Business Agency website at https://viennabusinessagency.at/creative-industries/about-departure
4 ......Perhaps that is why there is another alternative to the adopted grandmother or grandfather drawn from obscure yet radical corners of art history: a thematic focus on our own, actual origins. This is particularly true when artistic perspectives do not arise with patricide and supersession from the Oedipal logic of successive Western and market-oriented generations, but rather from minority and marginalized histories that look from the outside at the castles and palaces of an art world in which wars of succession are raging. Of course, there is by now a well-known mechanism for this, too, which tends to lead to the two strategies converging: regardless of whether my history begins from an external or an internal position, I will find myself a radical grandfather, an intrepid grandmother—whether simply as a relationship of ideas or via a biological relationship that ultimately leads to effective ideas...... | From Diedrich Diederichsen’s text Meine Herkunft habe ich mir selbst ausgedacht (My Origins? I Made Them Up).
5 From the film I Love You Phillip Morris, with Ewan McGregor and Jim Carrey.
www.galeriesenn.at