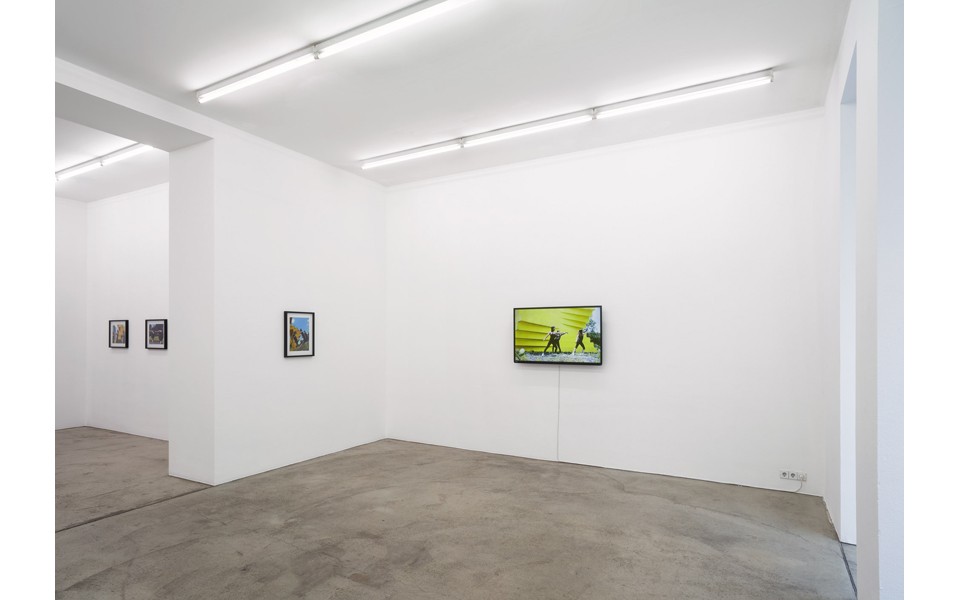 As with Lulić's recent mid-career survey exhibition Futurology, on display until mid-September at the LENTOS Museum Linz, Performative Sculptures is all about the sculptural.

In many of his works, such as Improved Partisan Monuments and other modernist replicas, the artist is concerned with spatial practice, i.e. exploring the relationship between body and space, body and sculpture. It is a similar process of comprehending, demomentalising and charging as in the aforementioned sculptural works, which he uses in his performances and performative videos, yet the specific method is different.
The focus is not on shrinking and changing an object, but rather on experiencing a sculpture or space through the dance-like occupation of a place. The works are conceived and elaborated, albeit immaterially, sculpturally - sculptures in the broad sense, performative sculptures.

Marko Lulić realised A Red Triangle Penetrating A Hexagon in 2016 for the Nuit Blanche in Monte Carlo. It was the first edition of Nuit Blanche and the Principality of Monaco decided to invite Jörg Heiser to be curator. The concept behind the Nuit Blanche was to install or present a series of works by international artists on the Monte Carlo promenade so that they could be seen in the course of an evening. Marko Lulić chose the roof of the Rainier III Auditorium as the venue for his performance. The flat roof of the building is hexagonal and covered in colourful tiles. These are a work of public art by Victor Vasarely dedicated to Grace Kelly. Lulić’s performance took place only once in front of about three hundred spectators. The artist developed a choreography with twelve dancers using the whole roof and Vasarely's geometric composition as pattern and dialogue partner. Lulić reacted to Vasarely‘s work while also citing El Lissitzky’s Beat the Whites with the Red Wedge (‘Клин ом красн ым бей белых!’) from 1919. A reference that seems a little out of place in Monaco. And that is precisely why the artist chose it.

Space-Girls Dance (Mexico) was filmed by Lulić in Mexico City in summer 2017. In 2009 the artist realized the video Space-Girl Dance 2009 during his time at the workshop prize of the Erich Hauser Foundation in Rottweil in 2009. On the same occasion his catalogue Death of the Monument was published. In the first work, he transferred the choreography of Raquel Welch’s clip Space-Girl Dance from 1970, which she had filmed in Mexico City, to Rottweil. Raquel Welch had recorded the clip in the public space, in front of sculptures that had been installed two years before, in 1968, as part of the cultural programme of the Olympic Games. Conceived by the German-Mexican artist and architect Mathias Goeritz, this sculpture trail is called Ruta de la Amistad and stretches over a total length of seventeen kilometres. Lulić had intended to shoot a video in front of the original sculptures on the Ruta de la Amistad since 2009 and now, in 2017, this project could finally be realised. It forms its own block with the work from 2009 and joins the by now considerable number of performative videos shot by Lulić during this period of time. Video is used as a survey of sculpture and body and as sculpture itself
www.galeriesenn.at