A Library As Memory 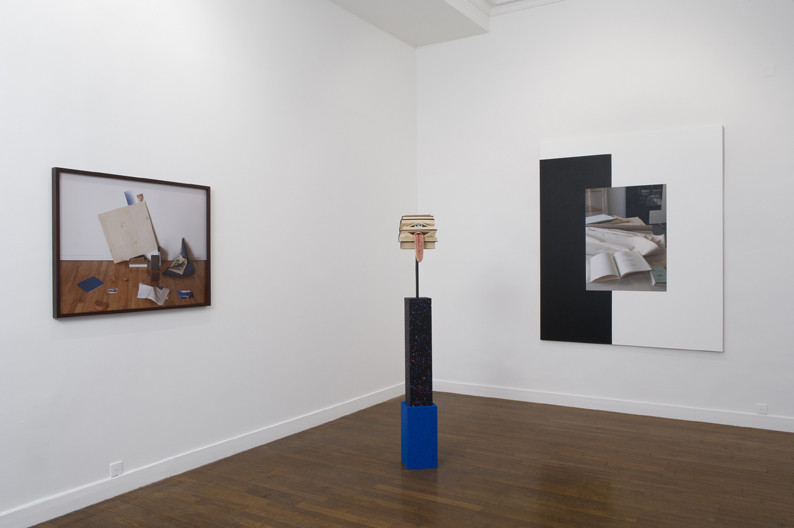 The dominance of digital media as the primary place for information exchange has fundamentally changed the place of the written word and books in our culture. Once the central place for both formalizing current discourse and preserving ideas books have become something more iconic often representing the need for some kind of collective memory that is more physically tangible then images on a computer screen. The artists in this exhibition all use the idea and image of a book in an idiosyncratic way which links shared cultural information with personal memory or interpretation challenging the singular voice of an author as well as examining the book as an iconic object versus a container for text.

RICHARD ARTSCHWAGER
Born in 1923 in Washington, U.S.A.
Richard Artschwager, through his work, erases the line between abstraction and figurative representation. It challenges our perception and our visual habits by deconstructing familiar forms.
“Book” 1987: this work is typical of Artschwager’s oeuvre, which seeks to transform everyday objects into ambivalent structures involving the interrelationship of illusion and reality. Book is made in Formica on wood.

IAN WALLACE
Born in 1943 in Shoreham, U.K.
Lives and works in Vancouver, B.C. Canada
“Le voile ouvert” 2011 is related to the poem “Un coup de dés” by Stéphane Mallarmé. This poem by Mallarmé, written and first published in 1897, has been an inspiration for my work since the early 1970’s. Not only does its unique typographical layout make it the first major work of visual poetry, I also consider it to be one of the sources for the central features of modern art; for avant-garde experiments in abstraction, collage, the readymade, and the monochrome. Its theme of “shipwreck” or the “naufrage” expresses Mallamé’s response to cultural crisis and his confrontation with artistic destiny and the indeterminacy of existence, or “hazard”.`
These works consist of photographs laminated onto canvas and combined with abstract fields of color and blank white canvas, which act as foundation, or grounding, for the indeterminate nature of photographic images centered in the composition.

CHRISTIAN MARCLAY
Born in 1955 in San Rafael, California, U.S.A
Over the past 30 years, Christian Marclay has explored the fusion of fine art and audio cultures, transforming sounds and music into a visible, physical form through performance, collage, sculpture, installation, photography and video.
“Whomp” 2006 is a print made from onomatopoeic words that he torn from comic books and collages before scanning and reprinting them at a large scale. Onomatopoeic words, with their huge letters and strings of unbroken vowels, blaze across the page at decisive moments in every superhero’s escapade, yet their forceful presence remains silent until interpreted and read aloud. Marclay treats these chunky words like objects, creating collages that emphasize the materiality of the paper and the ink of the original comic book. Removed from their narrative context, the words fizz with random violence and barely contained energy.

LESLIE HEWITT
Born in 1977 in New York
Hewitt has been described as a member of the post-civil rights generation, which understands the civil rights movement through images and text rather than direct experience.
In Make it Plain (2006) a series of large-scale photographs that instead of conventionally hanging on the walls, are exhibited on the floor, leaning against gallery walls like sculptural objects. Each work depicts meticulous arrangements of books, photographs and drawings, - themselves also leaning against the bare white wall within the pictorial frame of the photograph. These objects in the images alternately reference fragments of African-American literary or civil rights history and other texts that relate to techniques of observation and reproduction such as Eastman Kodak’s How to make good photographs?
Hewitt draws a link between the exploitation of labor indirectly represented by the goods of trade in the 17th century (especially Dutch) still life with the objects incorporated into her assemblages that at times directly refer to the civil rights and Black consciousness movements.

RICHARD WENTWORTH
Born in 1947 in Samoa, New Zealand
Richard Wentworth has played a leading role in New British Sculpture since the end of the 70’s. His work encircling the notion of objects and their use as part of our day-to-day experiences, has altered the traditional definition of sculpture. By transforming and manipulating industrial and/or found objects into works of art, Wentworth subverts their original function and extends our understanding of them by breaking the conventional system of classification. These sculptural arrangements and assisted ready-mades play with the juxtaposition of objects that bear no relation to each other, as well as with a range of materials taken out of their original contexts.
Firma Terra Firma Terra 2009 installation, books tied by ropes are hanging from the ceiling, floating above our heads, or page markers are sticking between the page in the form of broken plate, hand watches, and wrapped of sweets.

ALLEN RUPPERSBERG
Born in 1944 in Cleveland, Ohio, U.S.A.
“Siste Viator” 1993 (the passenger stopover)
This work is a collection of stories, real of imaginary. It is a monument both to our own memory to the memory of the people in the books.
The monument type, in the general mind, is related to the statuary, to human figure frozen in stone.
Here, the monument is a construction of words, ideas, and meaning all that makes the literature.
The battle of Arnhem has faced four nationalities (English, Dutch, Polish and Germans). For each country, Ruppersberg chose five popular books, published between 1920 and 1944. They have been reproduced exactly in their forma, cover, title page, and the rest being in white pages. One of the books in each language is reproduced in full. Each copy has a bookplate in the cover sheet where in inscribed the name of a fallen soldier in Arnhem.
The work was presented in 1993 in Arnhem, first in the cemetery of the city. The twenty volumes were somehow put in a closed work site hut. Nothing reported it’s presence and it melted in the solitude and the architecture of the place.

MARCO ROUNTREE
Born in 1982 in Mexico
Works and lives in Mexico
Marco Rountree’s proposal is as simple as the action of folding book pages to the left side and displays them on wooden modules, making it impossible to read them. The action of altering the book from its initial structure, converts it into another object, releasing it from its primary use (the reading) to turn it into a sculptural object with new formal connotations in which after every page has been turned, emerges a kind of code or graphic completely different that the book had in its origin. This impossibility to acquire knowledge or the difficulties for it is one of the latest issues in
Marco Rountree’s work. The low-rate of reading books by Mexican population and the relation to Mexican National University, built over Vulcan land, suggest the difficulties of population of low-income countries to develop a proper education.

HANS-PETER FELDMANN
Born in 1941 in Hilden, Germany
Feldmann’s approach to art making is one of collecting, ordering and re-representing. Hans-Peter Feldmann is a figure in the conceptual art movement and practitioner in the artist book and multiple formats. Feldmann reproduces and recontextualizes our reading of them in books, postcards, posters or multiples
THÉO MERCIER
Born in 1984 in Paris
The work of Theo Mercier is undoubtedly full of spirit, humor, lightness, gravity, elegance, invention, charm, poetry, lucky finds, surprises, grindings, plural directions...i.e. great future.

ANTONI MUNTADAS
Born in 1942 in Barcelona, Spain
Considered one of the pioneers of media art and conceptual art in Spain, for over four decades Antoni Muntadas has been creating projects that foment critical reflection about key issues in the configuration of contemporary experience. His aim is to detect and decode the control and power mechanisms through which hegemonic ways of seeing are built, exploring the decisive role played by the mass media in this process.
Antoni Muntadas has a retrospective in the Museum Reina Sofia in Madrid, from November 21, 2011 to February 26, 2012

NELSON LEIRNER
Born in 1932 in Brazil
The essence of the spirit of the production of Nelson Leirner is there: strong critical awareness, consideration of political issues and refusing skills, but also derision and anti-dogmatism. After the 1980’s, his artistic production focused on arrangements made of manufactured goods. Beyond the issues of “Pop”, the practice of assembling provides a true reflection and irony of a global industrial and cultural environment, a “shopping tourism” as a ‘ mass tourist trade”. All the exoticisms are represented: the Buddha’s, the holy Christian and Christ, cowboys, elephants, cats, and Japanese teapots.
Nelson Leirner has a rare quality, which he shares with some great artists like Picabia: always experimenting and never gain certainty.

JOSEPH HAVEL
Born in 1954 in Minneapolis, U.S.A.
Havel uses commonplace items throughout his practice, working with materials such as bed sheets, flags and books. Physically and conceptually manipulating the objects to erase their original context and function, Havel produces works that reveal new meanings in their altered form.
“A Void”. This is a George Perec mystery novel when a character disappears so does the letter “E” from the English language.
www.gabriellemaubrie.com