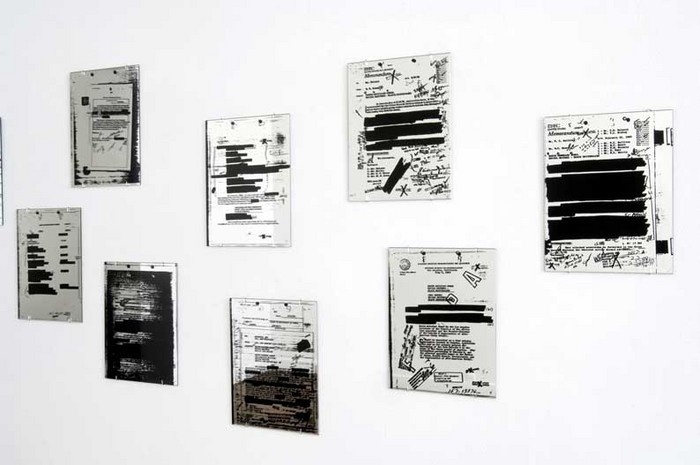 “You know the old story of the chameleon. Put him on green, he turns green. Put him on black, he turns black. But if you put him on plaid he explodes."
-- Jean Seberg
Galerie Gabrielle Maubrie presents two new works by Dennis Adams that play in the ruptures between Jean Seberg’s screen roles and real-life political intrigues. In “Blackface,” Adams reprinted 30 declassified documents from Jean Seberg’s FBI file at their original size on mirrors. The contents of these documents uncover the FBI’s monitoring of Seberg’s political, financial and sexual involvement with the Black Panthers and the smear campaign that FBI Director, J. Edgar Hoover generated with the news media to destroy her. These documents are graphically layered with both the FBI’s deletion markings of censored information and the reproduction scars generated from their serial photocopying as they were passed between offices within the agency. In reprinting the documents on mirrors, Adams compounds their graphic layering with the viewer’s reflection.

In “Curtain Call” Adams extracts a single shot from Godard’s Breathless (replayed in slow motion) that shows Jean Seberg opening a set of curtains and lifting her skirt up to throw it outside over the window sill. Adams inserts an inscription in graffiti on the outside wall under the window that Seberg’s billowing skirt partially conceals as it falls. It reads: “ILS VOIENT NOS FEMMES ON VOIT PAS LES LEURS.” This racial slur was a street expression used by Pied Noirs during Algeria’s War of Independence. On the one hand, Adams collapses two distinct scenes from French History, linked only by their shared time period, and on the other hand, he creates a playful fictional role for Seberg, suggestive of her real-life political intrigues.

Born and raised in Marshalltown Iowa, Jean Seberg was only 17 in 1955 when she was chosen from thousands of hopeful young actresses by film director Otto Preminger to star as Joan of Arc in George Bernard Shaw’s Saint Joan. In Seberg’s next film, Bonjour Tristesse, also directed by Preminger, her role as a spoiled pixyish adolescent vacationing with her playboy father in the French Riviera inspired a young Godard to invite her to co-star with Jean-Paul Belmondo in his New Wave sensation Breathless, 1959. Seberg went on to star in a total of 34 films that also included The MouseThat Roared, Lilith, Paint your Wagon and Airport. But it was Seberg’s empathy and sexual relationship with Hakim Abdullah Jamal, a charismatic player in the Black Power Movement, as well as her financial support of the Black Panther Party that lead the FBI in 1969 to monitor her activities. In 1970 the FBI in an effort to smear Seberg’s reputation planted a false story with a gossip columnist for the Los Angeles Times that she was expecting a baby fathered by a “prominent Black Panther.” Both Seberg and Roman Gary, Jean’s husband at that time, claimed Gary had fathered the child. The infant girl was born prematurely and died two days later. Seberg blamed the child’s death on the stress the rumor had caused during her pregnancy. She never fully recovered emotionally from the event and over the next several years became increasingly dependent on alcohol and prescription drugs. On September 9, 1979 Jean Seberg was found dead in her parked car in a Paris Suburb. The autopsy revealed she had overdosed on barbiturates and alcohol. After a lengthy investigation, her death was ruled a suicide by the Paris police.

The artist would like to acknowledge the pioneering work of Margia Kramer who first requested the declassified F.B.I. files on Jean Seberg in 1979 under the United States’ Freedom of Information Act.
www.gabriellemaubrie.com