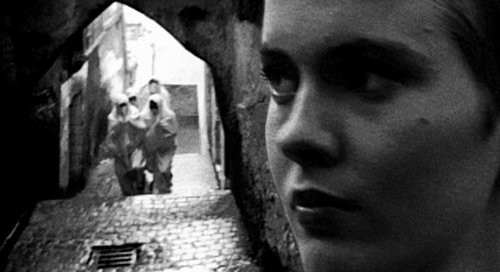 You know the old story of the chameleon. Put him on green, he turns green. Put
him on black, he turns black. But if you put him on plaid he explodes.
—Jean Seberg

DOUBLE FEATURE is a series of composite “stills” collaged from individual frames grabbed from Jean-Luc Godard’s Breathless (1959) and Gillo Pontecorvo’s The Battle of Algiers (1965). In these constructed images Jean Seberg, the co-star of Breathless, has been displaced from her celebrated stroll along the Champs-Élysées in Paris, where she hawked the New York Herald Tribune with Jean-Paul Belmondo at her side, and relocated in Algiers during Algeria’s struggle for independence from French rule, where she walks the city’s war-torn streets. The artist chose to combine still images from these two films because they depict a shared moment of time in French history in which two oppositional urban realities were emerging. .

While both Breathless and The Battle of Algiers depict the same historical window of time, and even share some of the era’s cinema verité, handheld camera aesthetic, they could not be more incompatible in their narrative pacing and political stance. Seberg and Belmondo wander aimlessly through Paris, attentive only to their tenuous
relationship and the momentary circumstances of their lives, while the cast of characters in Algiers, on both sides of the conflict, tests the absolute limits of violence in a battle to defend opposing ideals.

Released in 1966 and initially banned in France, The Battle of Algiers commemorates the Algerian uprising against French colonial rule, a struggle that lasted from 1954 to 1962. Considered one of the most influential films in the history of political cinema, it revolutionized the genre with its quasi-documentary style and use of former insurgents to reenact historical events.

Released in 1960, Breathless is Godard’s first full-length feature and a manifesto of New Wave cinema.

Dennis Adams has written and directed a film based on a walk that he made through the city of Bordeaux. Wearing a white linen suit and a small body camera, the film tracks Adams carefully carrying a full glass of red wine as he traverses the diverse urban landscapes of the city. As the motion of his walk creates accidental spillings of the red wine on his white linen suit, we hear Adams’ internal monologue as he raves on about the history and character of Bordeaux against his own emerging anguish. In trying to uncover the city's story, the artist also tells a tale of his own fragility.

Philippe Méziat, 12/10/2009
...but since we are talking about wine, all that should not make us forget the film shown « Spill » of Dennis Adams, this walk (filmed) of a man in a white costume holding a glass of red wine (Château Lafleur 2000), and even though he holds it tight spills a little of this red wine, which makes his costume spotted red, red on his legs, red on his hands, blood red – the meaning is clear. The film is magnificent.
Fascinated by the surface of the slight rotating mouvement of the liquid, you are carried by the beautiful text (translated), that circulates between the personal fantasies of the poet and filmaker and the recent history of bordeaux : the period of Vichy, the collaboration, Adrien Marquet, Papon, the great wine families, etc. it is of a great political strenght, much more than long speeches, and i advise everyone to go see this film.
To conclude, without any doubt, i am not sure to prefer the water of Vichy to the wine of Bordeaux, even though it stains.
www.gabriellemaubrie.com