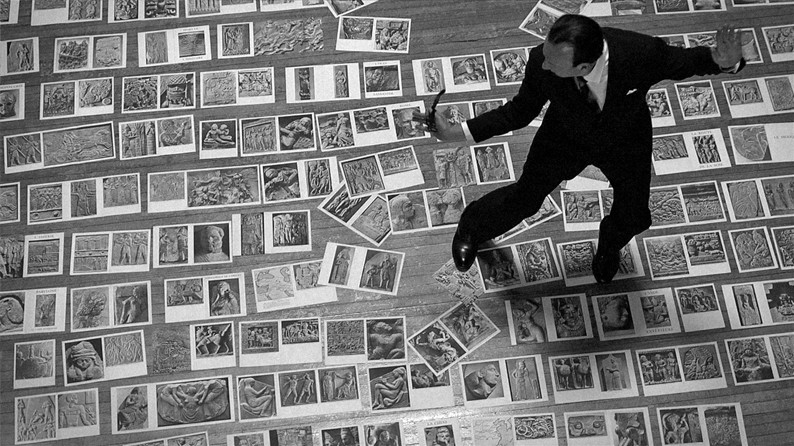 In his new video work, Malraux’s Shoes, Dennis Adams masquerades as André Malraux (1901–1976), the French writer, adventurer, Resistance fighter, cultural provocateur, art theorist, orator, statesman, and passionate archivist of the world history of art. Malraux’s arrest at age twenty-one by French colonial authorities in Cambodia for stealing bas-reliefs from a Khmer temple is an early testament to what would become his obsessive sampling of visual art from diverse cultures. For Malraux, this sampling was a means of laying claim to the very possibility of art’s transcendent value. Over the last forty years of his life, Malraux would assemble, disassemble, and reassemble montages of photographic reproductions to create Le Musée Imaginaire, which ranks as one the twentieth century’s seminal examples of the archive along with Aby Warburg’s Mnemosyne Atlas, Hanne Darboven’s Cultural History 1980–1983, and Gerhard Richter’s ongoing Atlas project. Malraux’s idea of an imaginary museum, a “museum without walls” (which he first announced in 1947), is a prescient manifesto of the digital age that enacts the displacement of the physical art object and the museum by photographic reproduction. And Malraux’s privileging of curatorial over artistic production is a first instance of explicitly locating the creative act in the process of assembling, grouping, and displaying works of art.

The set for Malraux’s Shoes is a reconstruction of the iconic photograph of Malraux standing in his study with the plates of his book The Imaginary Museum of World Sculpture laid out on the floor before him. The entire video is shot on this single set. With the camera positioned overhead, the plates on the floor become the backdrop for every shot; no walls are ever visible. As the camera moves between fixed shots and slow pans, details of the images on the floor form a visual landscape that runs through the work.

Adams literally steps into Malraux’s shoes, suit, and style—Malraux’s blurring of the boundaries between history and legend in coloring his own biography makes him an ideal object of masquerade. We see the Malraux character walk on and over the images as we overhear his interior monologue, which is interrupted by outbursts of mutterings and ravings. Over the course of the video the subject of the monologue moves freely between Malraux’s time and the present, and in moments, the persona of Malraux is overshadowed by Adams’s own personal speculations, doubts, and anguish.

TAGGING THE ARCHIVE is an ongoing series of works on paper in which the artist annotates
Books, newspapers and posters from his personal archive. Photographic reproductions of the original documents with their scars from use and decay function as grounds for critical response, musings, and free association.
www.gabriellemaubrie.com