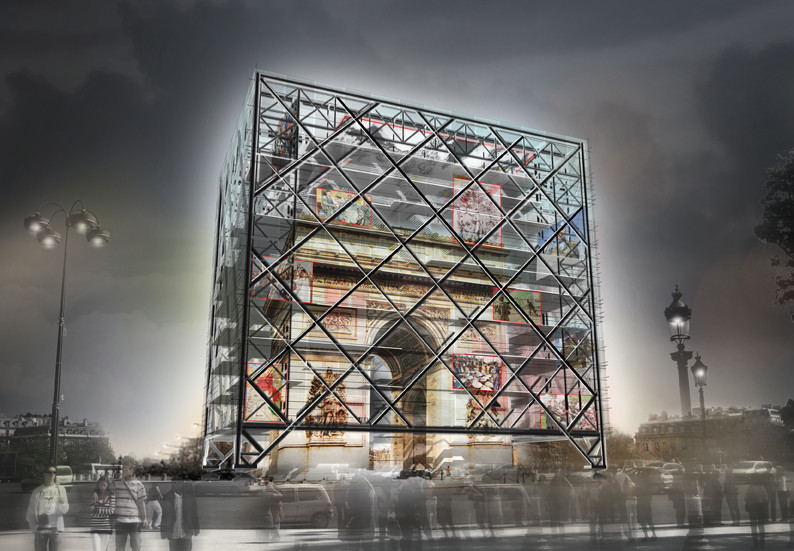 ARC DE TRIOMPHE
WORLD INSTITUTE FOR THE
ABOLITION OF WAR

Millennia of bloody conflicts and centuries of devastating modern wars have ruined economies, ravaged countrysides and city centers, and made powerful imprints on our souls. We seem incapable of liberating ourselves from war and its dominant position in our psyches.
Continuing armed conflicts, tragic and heroic memory of past wars, the seeming unavoidability of wars, and their call for our potential readiness for new battles have become interconnected and live firmly inside us.War Memorials are symbolic ideological machines that reinforce, consolidate, and perpetuate such connections.
They cover up, choke, subdue, and suppress thinking about war critically and analytically. Using their artistic skills and hypnotic powers, War Memorials consolidate and console us in the idea of service in war as our moral and sacred duty.
War prevention and peace-building centers, when seeking their place in an urban symbolic landscape, must appropriate War Memorials as their physical-symbolic (architectural) sites in order to deconstruct and undo their ideological and psychological operations.

In today’s world and especially the European Community, the Arc de Triomphe de l’Étoile in Paris must be seen as a grotesquely anachronistic symbol. It is a major historical suspect and witness to the most deadly and destructive military and ideological adventures inthe history of modern Europe.
The Arc commemorates the Napoleonic Wars and the First World War (through the underground Tomb of the Unknown Soldier) in elaborate iconic, inscriptive, and architectural ways, while it does not commemorate in any way their devastating aftermath nor it does anything to help ending war. Most importantly, it does nothing to help end war.
Napoleon’s Empire staged first modern Total War through mobilization of 1.5 million people through conscription. The Napoleonic Wars resulted in estimated 4 million of the roughly 205 million war deaths of the 19th and 20th centuries. The Arc is a legitimizing marker for subsequent wars and hence the worldwide dissemination of modern “triumphal” memorial arches, eternal flames, and tombs for unknown soldiers. The era of modern Total War only began with the Napoleonic Wars. It was followed by the American Civil War (1861–65.7 million deaths), Russian Civil War (1917–22, 9 million deaths), World War I (1914–18, 15 million deaths), and World War II (1939 –45, 55 million deaths). Add to this an enormous number of devastating conflicts, wars, crimes against humanity, and genocides.
The “peace” achieved at the end of the Napoleonic wars and the later “war to end wars”—World War I—serves as grave testimony to the absurd illusion that a lasting peace can be achieved through war.

The proposed Institute for the Abolition of War is a structure proposed to surround the Arc de Triomphe. When the Institute is built, the Arc will be seen as immersed and contained in the Institute’s larger structure. Capitalizing on its most prominent location on the Voie Triomphale in line with monuments that extend from the center of Paris to the west, the Institute will assume a


central place on the cognitive map of Paris and will inscribe itself powerfully in the minds of visitors.
The Arc de Triomphe: World Institute for the Abolition of War is an institutional and architectural idea for an international transdisciplinary center offering both a symbolic structure for inspiring philosophical, psycho-analytical, and political engagement, and an activist center to encourage analytical, proactive, and transformative approaches to the war-abolitionist process.
The scaffolding-like structure of the Institute immerses the Arc, leaving the memorial visible in its new context as a gigantic cultural specimen, a relic of the bellicose past reconfigured as a gigantic object of research. Enveloping the work of the Institute in visual transparency and facilitating free circulation through and around its physical structure offer an open-access invitation to all who wish to be historical witnesses, critical interlocutors, and potential intellectual and activist forces toward a war-free world.
The grand national and imperial war narrative inscribed through all parts and surfaces of the Arc require detailed cross examination. Transforming war-bound cultures requires critical investigations of its roots, artifacts, and relics.
For the purpose of such an examination, the structure of the Institute will be equipped with a system of walk ways, ramps, elevators, and vertically moving viewing platforms to allow, inspire, and assist the scholars, philo- sophers, and visitors in studying the war iconography of the Arc while hearing and viewing interpretative and historical narratives, as well as debates and discussions between philosophers, scholars, peace activists, politicians, and while engaging with them in dialogues directly or with special communication media.
Above the Arc’s roof will be the World Situation Map displaying the changing global dynamics of potential and existing wars and conflicts, as well as post-war,post-conflict, and lasting peace zones.
The Map will be suspended at the center of the Discursive Forum for the Abolition of War, a large highly mediatized gathering space open to visitors, to scholarly and public debates, and designed for special events and global conferences. The Cross-Disciplinary Center for Global Peace Projects will be nearby and will promote analysis in the following domains: the Social, Psychological, and Anthropological; the Politico-Ethical and Legal; the Cultural and Ideological; and the Economic, Scientific, and Technological.
External and internal plasma screen and pixel boards installed throughout the structure will display programs and information; they will have working Web links with peace-building organizations around the world and serve as a liaison in the development of an actively participating public.
In our unconscious, we are ourselves War Memorials while, as a product and a fabric of our nationalistic and chauvinist heritage, we are part of a larger external War Memorial named Culture. If we wish to foster living rather than dying and killing, we must take up the task of disarming both ourselves as War Memorials and the entire culture as one integrated War Memorial. A new Arc de Triomphe would then deserve its glorious name.

Nietzsche said that we should have the kind of past that we deserve.We should be able to deserve a past in which war will be absent from our present and future.
www.gabriellemaubrie.com